Our tale of romance begins, like so many others, in the depths of a graveyard.

Poor little Jennifer was weeping over the grave of her occasionally departed boyfriend Rick when suddenly a bolt of lightning smashed it to pieces and called our masked hero back from that great big slaughterhouse in the sky. But unfortunately for our doubtlessly stiff stiff, a second bolt ends up reviving the Pumpkin King, a giant jack olantern who makes off with Jennifer for reasons I dont even want to begin contemplating. Dejected, theres nothing for Rick to do but grab his cute little axe and set off in pursuit of his girls heart . . . and maybe some entrails. 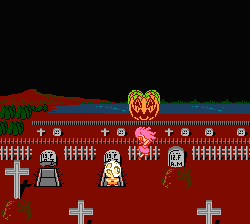 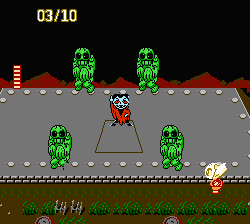 Now if youre even passably familiar with the Splatterhouse series you might have noticed that Rick isnt quite his usual hulking self. In fact, you might say hes a tubby midget wearing bright orange short shorts and even a pint-sized hockey terror mask. But just in case Lil Rick, Lil Jennifer, and the big smiling pumpkin werent overt enough clues, Wanpaku Graffiti drops the series trademark blood & guts pus-busting and goes for a cutesy SD style instead. And its awesome because not only are the graphics truly excellent for just about any Famicom game around, but they put these adorable-looking characters in completely morbid and ghastly situations to make things utterly ridiculous . . . ridiculously awesome!

How ridiculous? Rick begins his journey in the cemetery dodging flying grave markers and chopping up zombies as they erupt from their caskets. Business as usual until a vampire dressed like Michael Jackson pops up from a conveniently placed dance floor and starts moonwalking back and forth across the stage with his slime-covered companions complete with the NES sound chip doing a rendition of Thriller! And thats just the middle of the first stage. Later on youll find yourself trapped in a room full of roaring chainsaws that hungrily grind the floor in search of victims, while a nearby kitchen distributes headless chickens that scurry about like . . . well, never mind. Down on Devil Street youll fend off packs of seed-spitting pumpkin-headed goons before heading into a decrepit chapel lined with skeletal worshippers in the pews and a satanic altar presided over by a jet black ram. 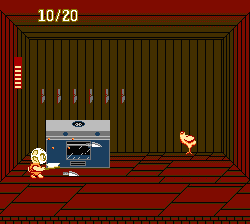 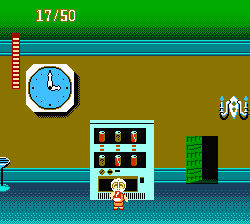 If he can overcome mutant flies, an infestation of chest-exploding arachnids, and Edvard Munchs The Scream, Ricks travels also take him to the shark-infested waters of Diamond Lake to do battle with a phantom armed with a knife and fork. And wouldnt you know it, there just so happens to be a nearby summer camp in the woods, eerily quiet except for the chirping of crickets and of course the corpses hanging from the trees whose bodies detach to give chase. Make it out alive and the Pumpkin King awaits with a gaggle of ghouls within his ornate mansion, so please make sure to refresh yourself at the conveniently installed soda machine before this story is happy end.

But theres more to this game than just oodles of demented weirdness. A lot more. This game doesnt really play anything like the other Splatterhouse games, and when you stop to think about it thats a good thing. I mean the first two were basically clunky sidescrollers hampered by awkward jumps and an awful lot of punching; this ones pure platformer with sprawling levels that go all over the place, scads of enemies that go down in one hit, and perfect controls that go down smooth.

Not only that, but you get an experience point for every creature you carve, and as Rick levels up his life meter is extended. Theres even some strategy involved there as well  every level has a password, but using them cuts your level back down to its puny beginning. Theres plenty of candy and hamburgers lying around to perk you up, but you dont get your life restored in between levels so if you want to keep all that extra health for the later areas youll have to ace them with only three continues and no extra lives. 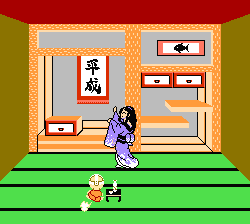 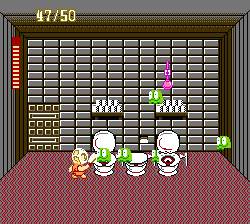 And even if you can defeat Jennifers gourdlike kidnapper, youre not quite finished. Search hard enough and youll also discover a pair of hidden levels that transport Rick through time. Whether youre hopping through the ancient trap-lined pyramids of Egypt or sitting through a traditional Japanese dance by a kimono-clad woman while sipping sake and repeatedly tapping the A button to make Rick FART, youll earn crystal balls that add extra scenes to the already crazy ending.

At first the explicit violence that Splatterhouse is best known for makes it seem like a pretty unlikely choice for an SD game, but it actually ends up being the best entry in the series. Its creepy cuteness seems strangely appropriate, and even with all the B-horror references and off-kilter humor, Namco did something they neglected with the other games: great gameplay with innovative features and entertaining platform action . . . and free stickers. Stickers are neat. If you play only one game that requires you to battle possessed fecal matter as it rises from the mens restroom, make it this one.

If you enjoyed this Splatterhouse: Wanpaku Graffiti review, you're encouraged to discuss it with the author and with other members of the site's community. If you don't already have an HonestGamers account, you can sign up for one in a snap. Thank you for reading!

© 1998 - 2022 HonestGamers
None of the material contained within this site may be reproduced in any conceivable fashion without permission from the author(s) of said material. This site is not sponsored or endorsed by Nintendo, Sega, Sony, Microsoft, or any other such party. Splatterhouse: Wanpaku Graffiti is a registered trademark of its copyright holder. This site makes no claim to Splatterhouse: Wanpaku Graffiti, its characters, screenshots, artwork, music, or any intellectual property contained within. Opinions expressed on this site do not necessarily represent the opinion of site staff or sponsors. Staff and freelance reviews are typically written based on time spent with a retail review copy or review key for the game that is provided by its publisher.