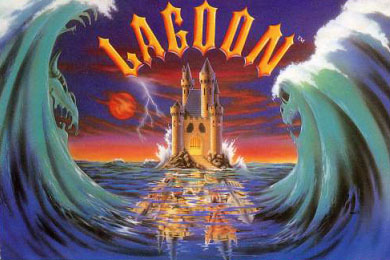 Much like its sorry lineup of fans, this game suffers from a serious lack of length.

Thats not to imply that it demonstrates any brevity; lord no, it certainly manages to drag on for an eternity. Im actually referring to our rotund excuse for a hero and his pitiful excuse for a sword. In fact if youre even passably familiar with Lagoon then you already know that my using the term sword is a filthy lie. Its actually a dinky little knife that suddenly flashes out a centimeter away from his body to give the odd uninspired monster a quick nick.

Well . . . provided that the beast in question is standing about one pixel away from him, anyway. This thing couldnt cut through warm butter  which, judging by our heros physique, must render him inconsolable.

Because Lagoon doesnt merely arm you with a double-edged toothpick  its incredibly slow, too! Nasir (said rotund excuse) waddles across the land at a snails pace as if he were physically weighed down by the sheer crappiness of his adventure. And his generic story, as told through painfully crawling text boxes, is little more than a skeletal outline with virtually nothing of interest occurring for three quarters of the game until at last you rush through some annoying boss encounters and the (thankfully) final conclusion. Assuming, of course, that you were somehow enough of a masochist to keep going that long.

For as empty as slogging through its story development may be, even ten minutes of the action feel like ten too many thanks to its patented combination of moronic AI and random hit detection. Picture a group of monsters that wander around aimlessly until you come into range, which attracts one of them towards you like a magnet until making contact with your gleaming knife. Er, sword. The monster is then repelled a few steps back with a hearty PING! only to subsequently resume its mindless approach forward in a dubious march to the death! 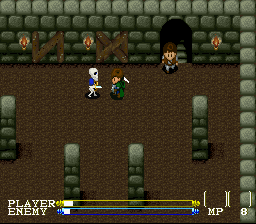 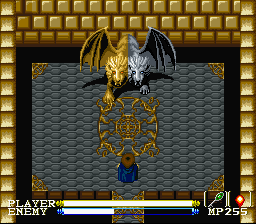 The argh would be when you mess up the exact timing made necessary by your itty bitty blade and the foul creature robotically ploughs right through you. But joy of joys, that merely forces our hero to hurtle backwards so that he can mosey on back and line up to trade blows again. With a plodding and overall haphazard method of combat like that you can well imagine that Nasir gets his fool head kicked in an awful lot, which might lead you to wonder how youre ever supposed to get through the first dungeon alive. The programmers must have wondered this themselves, so our heros health bar will replenish itself provided he stands perfectly still for a little Quiet Time. Naturally this recharging is (surprise!) incredibly slow, so when youre not laboriously killing something youre wasting time huddled in a corner somewhere to lick your wounds. And unfortunately for Nasir, savage wounds taste very little like butter.

At least the music is pretty good, even if the utterly lame samples provided by the Super Nintendos sound chip are a feeble embarrassment if you compare them to the awesome FM on the Sharp X68000. Fundamentally theyre the same except that the original tunes ROCK  its a shame that the soundtrack is so damn rare or Id strongly recommend just forgetting the game entirely and enjoying the fantastic score instead. 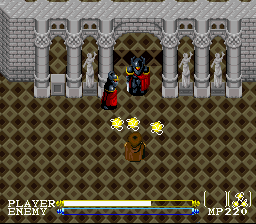 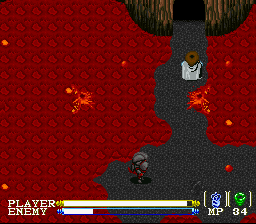 Oh, and I guess the magic system isnt half bad either. You can mix and match among a small collection of staves and crystals for different spells that can (wonder of wonders) safely be launched from a distance, like a cute little fireball which goes GLONK!

But oddly enough thats exactly the same sound my head makes as I smack it against the desk just thinking about all those horrific subterranean underworlds. Your average dungeon consists of a sprawling maze fraught with identical corridors and intersections that stretch on as far as the eye can see  because gosh, what could be more fun than (slowly) wandering in circles while stopping to sting dawdling enemies with your microscopic blade? Well yes, being punched in the face for one, but the question was mostly rhetorical. I imagine the actual reason behind so many half-assed developers feeling the need to plot inane labyrinths all over the place is probably to keep you roaming through them until the game cant be returned.

And youll undoubtedly be occupied for quite some time, as an insane amount of hopelessly dull level building is all but required for good measure. In another fine example of the carefully tuned balance that makes this game so memorable, each and every boss will effortlessly slaughter our hero without fail until he gains roughly ten or so levels more than he has by the time he reaches them. That just might have something to do something with the fact that you have to go nose-to-nose with these demons and they dont decide to just shamble into you, which has a disconcerting tendency to cut your health to ribbons before you can say cheap shot. Or it might be because you cant cast any spells during a boss fight, although I suppose triumphing over one of the massive guardians without stopping to slaughter countless drones outside their door for two hours could be considered a kind of magic.

What with all this necessary fighting it certainly is a relief to know that the combat system is so practical, yes sir. I particularly recommend stalking the magma-filled caverns where disembodied dragon heads suddenly shoot out of nowhere to drag Nasir through the inferno and crunch him into a wall, killing him almost instantly.

Thats probably what everyone wanted in the first place, really. It would be unforgivable for me to close without revealing the dire peril that compels Nasir to embark upon his journey in the first place: the waters of Lakeland are beginning to grow muddy.

You know, its this last example of the games logic at work that finally confirms my suspicion that Lagoon is in reality just a clever analogy for child abuse. In fairy tales impoverished families would routinely send their ill-equipped children off into the woods to be devoured by wolves and witches; here they send them on ridiculous quests to end marine pollution. Tread forth with honor and courage, young Nasir, for thou art destined to save our people from the villainy of (haha) muddy waters! Steel thyself against treachery (hoho) with the legendary blade (chuckle) always at thine side . . . now run along and (chortle) free us of this terrible burden, lawks and forsooth. 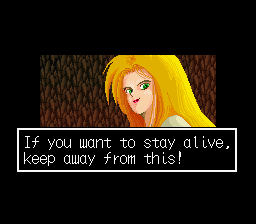 Should you consider yourself a person of good taste, do us all a favor and steer clear of this turkey before it becomes an analogy for self-abuse instead.

If you enjoyed this Lagoon review, you're encouraged to discuss it with the author and with other members of the site's community. If you don't already have an HonestGamers account, you can sign up for one in a snap. Thank you for reading!

© 1998 - 2022 HonestGamers
None of the material contained within this site may be reproduced in any conceivable fashion without permission from the author(s) of said material. This site is not sponsored or endorsed by Nintendo, Sega, Sony, Microsoft, or any other such party. Lagoon is a registered trademark of its copyright holder. This site makes no claim to Lagoon, its characters, screenshots, artwork, music, or any intellectual property contained within. Opinions expressed on this site do not necessarily represent the opinion of site staff or sponsors. Staff and freelance reviews are typically written based on time spent with a retail review copy or review key for the game that is provided by its publisher.