Black clouds slither across the moon overhead as our hero straps on his tight leather outfit and swaggers over to the rusty gates before him. Just ahead lies a ruined castle, and before this night is through hes going to subject its occupant to the crack of his whip and a violent end upon his hard wooden stake.

But dont be afraid, this nocturnal miscreant is merely Simon Belmondo  lash-toting vampire hunter for hire  and hes setting off to fulfill his ancestral charge. You know the one: ridding the land of Count Dracula and his legions of undying horrors dredged up from beyond the grave. 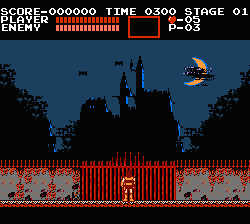 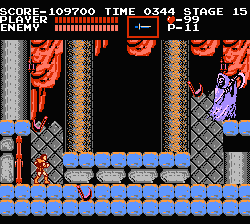 Thats right, this is a Castlevania game!

In fact its the original Castlevania that we all know and many love on the NES  or it would be if it wasnt for at least one vital difference. Just like with Metroid and Zelda, Akumajou Dracula was actually developed for the Famicom Disk System and only later ported to a cartridge  and even then only in the US and Europe.

But unlike some FDS translations (notably Zelda II and Simons Quest), the disk-based Dracula is pretty much identical to ours: it features the same graphics, the same music, and the same hard as hell difficulty thanks to the same sadistic play control. The layout of the candles is different for some reason, and you can input your name at the beginning to personalize the staff roll, but the real difference here is something born out of sheer laziness.

Besides (and because of) its difficulty, one of the complaints youll most frequently hear against Castlevania targets its lack of a password system. I certainly would have appreciated one myself way back then; instead most of us became very, very good at repeating the levels over and over again until we could trounce them in our sleep. The rest simply went insane, never realizing 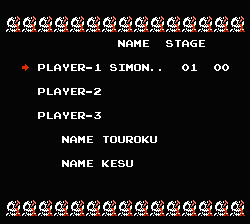 After booting this disk youll notice a nice little name registration menu nestled within a border of tiny little skulls. How cute, each has a tiny stake poking out of its bleeding eye socket! Theres even a catchy tune playing that was remixed for Harmony of Dissonance, and it looks just a morbid take on the player registrations you see in battery-backed NES carts. You know why? Because designing the game for a floppy disk meant you could actually SAVE YOUR GAME.

Yes, Castlevania had always been intended to let you pick up from the level you died on whenever you felt like it . . . but Konami nixed the idea completely when they brought it to the west! Nintendo at least tried to compensate:

Metroid gave us cumbersome but permanent passwords.
Zelda gave us the convenience of battery-backed memory.
And Castlevania . . . it gave us high blood pressure.

So if youve never been keen on the frustration factor of this game you might want to give one of the Famicom versions a try depending on how badly you suck. Japan didnt get a cartridge port of Akumajou Dracula until 1993, which is not only incredibly rare but its also more than just the American game with a new title screen. No, that copy doesnt have a save feature either  it has an EASY MODE instead.

Or you could just play the MSX-only sequel Vampire Killer, which combines the traditional platforming action with navigating through mazes, hunting down keys, and getting your face torn off by blood-crazed barracudas  a few hours of that and this one will seem like a carefree stroll through the park.

The stroll of a man with little to no motor skills, but a stroll nonetheless.

If you enjoyed this Akumajou Dracula review, you're encouraged to discuss it with the author and with other members of the site's community. If you don't already have an HonestGamers account, you can sign up for one in a snap. Thank you for reading!

© 1998 - 2022 HonestGamers
None of the material contained within this site may be reproduced in any conceivable fashion without permission from the author(s) of said material. This site is not sponsored or endorsed by Nintendo, Sega, Sony, Microsoft, or any other such party. Akumajou Dracula is a registered trademark of its copyright holder. This site makes no claim to Akumajou Dracula, its characters, screenshots, artwork, music, or any intellectual property contained within. Opinions expressed on this site do not necessarily represent the opinion of site staff or sponsors. Staff and freelance reviews are typically written based on time spent with a retail review copy or review key for the game that is provided by its publisher.