It was basically an evening like any other. Basically. Weary from another rowdy day of playing baseball, shooting marbles and catching bullfrogs, young Mark was just starting off for the comforts of home. ~La la la~ Mark sang as he innocently skipped down the road, his gaze fixed upon the stars shining brilliantly overhead. Golly gee, he exclaimed, that star shining brilliantly overhead appears to be coming closer and closer before my very eyes! Indeed, he could feel those eyes growing moist due to the profound beauty of its shining brilliant shine. And thats when he was abducted by a winged creature from space and subsequently transported to its grotesque realm of madness and horror. Hardly worth mentioning, really.

But just because Mark and his new friend lead such dreary lives doesnt mean that Monster Party isnt worthy of mention. Sure it's not the sort of game that youd really want to pick up again after you finish, but theres no denying that itll make you stop and think long after the fact. Theres just something about this game  maybe its the unhappy looking skeletons bathed in an ocean of blood, I dont know  that tells me Nintendo didnt screen it for potentially offensive content quite as thoroughly as they normally do. 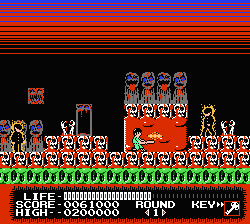 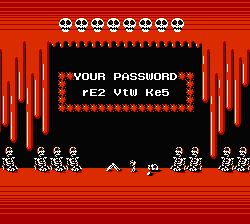 I mean its all fine and dandy at first, when youre in a cute little forest filled with platforms that have smiley faces stamped all over them. Youre merely fending off burning schoolboys and legs sticking out of the ground until the landscape suddenly twists into deformed skulls with blood oozing out of their sockets! The monsters that youll meet as youre walking down the street (paved with human corpses) are similarly maladjusted: disembodied faces in the sewers that vomit gore, tiny fish with gigantic shark fins strapped to their backs, hungry umbrellas that hang upside-down in caves, and what appears to be a possessed pair of pants.

Sometimes one of them will leave behind a magic pill which allows Mark to temporarily assume the misshapen form of his horrific kidnapper!

His name is Bert.

Bert can fly all over the screen.

No worries though, because the levels are really little more than (cracked) window dressing for all the mysterious doors of mystery and enticement that transport you to:

1.) a heated duel to the death with a fiendish miniboss
2.) an empty room
3.) a garbled and/or blinking screen (but only if youve been blowing on the contacts again) 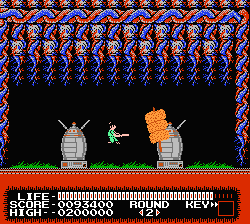 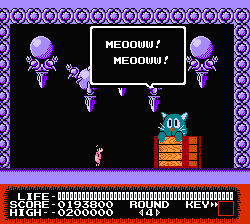 Seeing as how there are only three bosses per stage, most of the time youll end up with whats behind door #2 . . . which is to say that youll navigate out of your way across scorpion pits and through the elephant man just to reach nowhere at all.

It quickly becomes obvious that these bosses were the designers real focus, but even without Bert the pill-popping monstrosity youll find that theyre pretty easy. Just about everything follows a blatantly simple pattern and shoots projectiles that you can blast back at them with your trusty bat for even more damage. But thats really not the point here, not when meeting up with one means doing cartwheels over the already teetering tightrope of sanity. Theres just no way for me to explain why a wishing well is firing coins at you or why youre battling the outline of a mummy who proclaims that his legs are asleep. I cant possibly begin to rationalize the epic confrontation between Mark and a batch of unusually deadly fried shrimp (with a side of onion rings) that just sort of bounce through the air in search of human flesh. And lets not even get into the motionless carcass of a giant spider whos considerate enough to let you know Sorry, Im dead. 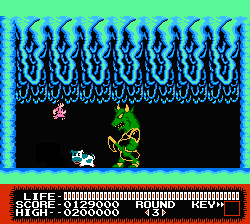 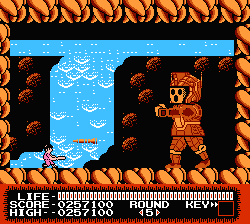 Its not necessarily the weirdest game youll ever play  not when we have Kenji Eno, the PC Engine, and that arcade game where you shove your hand up peoples rectums  Im just saying it features dancing zombies, ghosts who dont want you to pick on them, and caterpillars named Royce. On the NES.

Seriously, Dracs Night Out isnt half as outlandish despite featuring a pint-sized prince of darkness who would smite the peasants by slipping on his Reebok Pumps  and that game was never released. Speaking of which, its awfully curious that this game was translated for American audiences when it was never actually released in its own country, possibly because the main character wasnt a barely pubescent schoolgirl who defeated the monsters by flashing her panties at them. Much like determining what the hell is going on in Monster Land, I guess this will have to remain one of those nagging mysteries of the universe  because even in the face of such hilarious oversights as microwaved rodents and The Incredible Exploding Hitler, I have no idea how Bandai ever got away with this one. 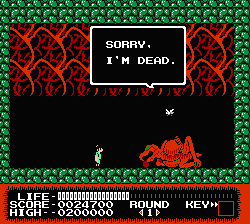 If you enjoyed this Monster Party review, you're encouraged to discuss it with the author and with other members of the site's community. If you don't already have an HonestGamers account, you can sign up for one in a snap. Thank you for reading!

© 1998 - 2022 HonestGamers
None of the material contained within this site may be reproduced in any conceivable fashion without permission from the author(s) of said material. This site is not sponsored or endorsed by Nintendo, Sega, Sony, Microsoft, or any other such party. Monster Party is a registered trademark of its copyright holder. This site makes no claim to Monster Party, its characters, screenshots, artwork, music, or any intellectual property contained within. Opinions expressed on this site do not necessarily represent the opinion of site staff or sponsors. Staff and freelance reviews are typically written based on time spent with a retail review copy or review key for the game that is provided by its publisher.