Impeccable controls, eye-popping visual effects, and furious shoot em up action thats seamlessly thrown together with multiple paths and an onslaught of intense bosses  yes, Contra: Hard Corps is an utterly fantastic game, one of the best on the Genesis. This is a review for Technocop, which is anything but.

But seeing as how this questionable use of electricity was a cult hit when it first came out on the Amiga, Im willing to concede that the original game may *not* have sucked so hard that they might as well have just filled the box with hungry leeches instead. Then again we console gamers were a lot more demanding than our computer-nerd brethren, often insisting upon such trifles as music and play control, so maybe that has something to do with it. But hey, at least the Genesis version remembered to include the Amigas most memorable feature: it being not suggested for children under twelve. 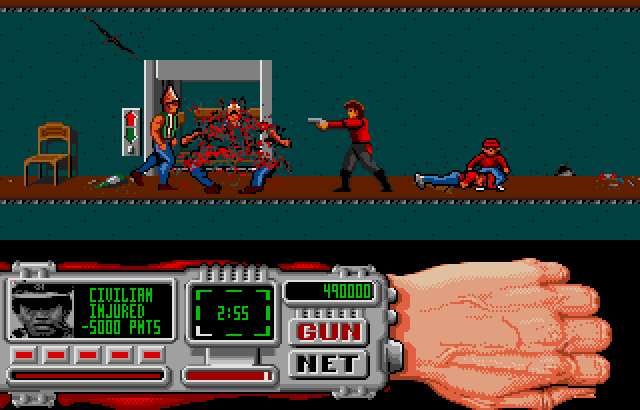 Because not only do adorable little tykes have a tendency to get caught in the crossfire, but every time you gun down an enemy he literally EXPLODES in a shower of gore! As if that wasnt enough, his blown-off limbs continue to twitch helplessly on the floor before finally lying still in the newly made ruddy pool! Of course, this is depicted with graphics that would look right at home on the Master System, so in this case disturbing is replaced with unintentionally hilarious.

Too bad the enemy AI isnt amusing in the least. Pairs of generic thugs simply run up to you and proceed to bash away with their whips and clubs, rapidly draining your health despite your awkward attempts to pump them full of lead. And since even the lowliest goon can shrug off multiple shots to his manly chest, youll often have to stop and reload while they continue to whittle away your life. But its not as if all your enemies offer an inglorious death under the lash  many appear out of nowhere to throw knives at you from afar! That must be why your character wont respond until a few seconds after you instruct him to crouch, and meanwhile someones already assaulting you from up close anyway. With basic enemies like these, you know the bosses must be something else! 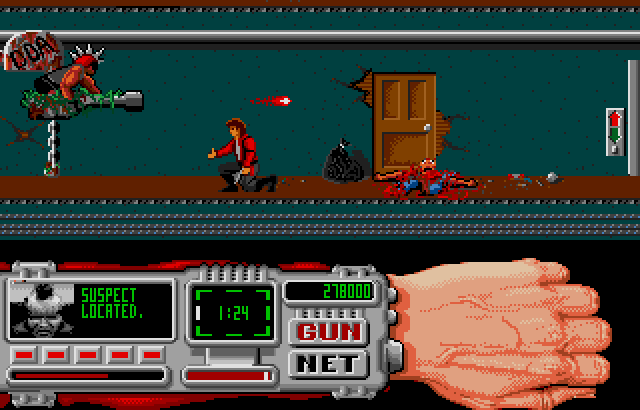 Bosses like the obese slob who proceeds to shove a barrel of toxic waste towards our hero  and then does absolutely nothing, making not even the slightest of movements to defend himself. However this furious, thumb-pounding first encounter is soon trumped by what appears to be a man wearing a magicians top hat who teleports about the screen not once, not twice, but thrice . . . and then promptly vanishes in a puff of smoke, never to return. And lets not neglect the sensuous guardian of level three, a greasy thug who straddles his long, hard cannon as it slowly discharges sticky globs of ooze . . . which really isnt as cool as it sounds. Really. Naturally I could list more of these mind-blowing duels to the death, but that would mean slogging through the game again  and damn it, a mans got to know his limitations!

But wait! Each of these side-scrolling massacres is preceded by a thrilling racing segment in which you speed towards the next crime scene in your tricked-out sports car! Blast all the other motorists into dust with your payload of highly volatile basketballs! Cheer as your sleek ride just sort of floats across the road whenever its not spinning out at the slightest provocation, and, um . . . never mind. 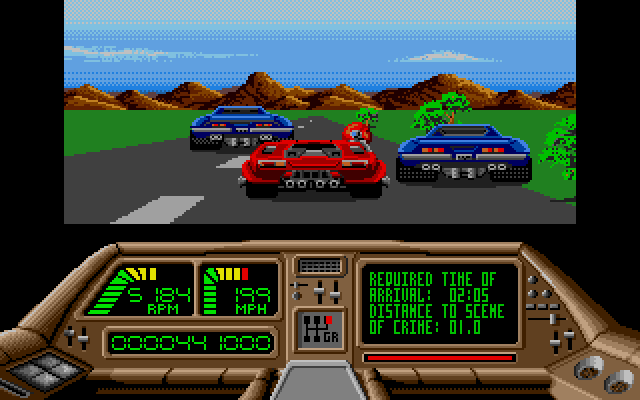 Its still better than the rest of the game, because all sixteen levels consist of the same dreary hallways over and over and OVER again. Theyre nothing more than a seemingly endless series of apartment doors, sleazy women, and corpses with knives protruding from their chests. Oh how I envy them; the operative word here is labyrinthine considering that you pass by virtually the exact same scenery every three seconds. Accompanied by utter silence save for the dull thump of your boots, youll discover increasingly complicated mazes full of randomly placed walls, elevators that dont stop at every floor, and gaping holes scattered all over the place  sometimes stacked over each other so that when you fall in one, you actually plummet all the way down to the basement. You can forget about navigating these pitfalls without a potent dose of random luck; our heros jumping is particularly unwieldy, causing him to uncontrollably soar a mile  horizontally  with an appropriately goofy hyurk!

Despite this, there are strict time limits in place that give you just enough to track down the boss hiding place provided you already knew where you were going. Its all too common to wander aimlessly about, occasionally stopping to expend a few lives on the clone army of thugs, only to run out of time and subsequently find yourself in a hopeless search for the door you started from. And then youll head for the next level, only to wonder if you were unknowingly caught in an inverted warp zone as you suffer through virtually identical surroundings and struggle with the same frustrating enemies.

Therefore the games most considerate feature is that you dont even need to achieve success in order to progress. Fail to eradicate or even *locate* the boss and the game will still chug merrily along, even to the point of awarding you (theoretically) cool new gear for your car as if youd actually pretended this was a real game instead of making yourself a tasty sandwich while your character loiters by the entrance for three minutes. Its almost as if the programmers realized the sum of their efforts was barely playable and that no one would ever persevere to the end; feeble developers, I salute your painful honesty. 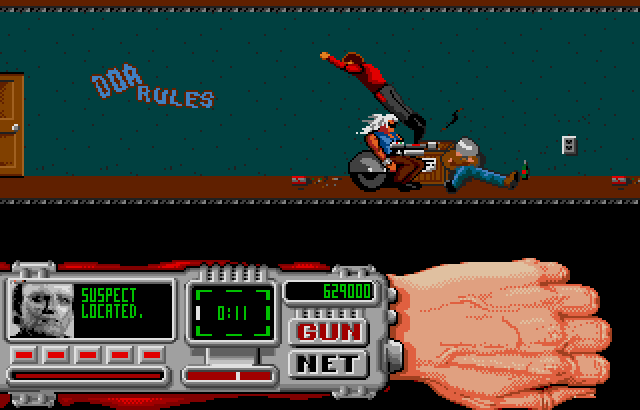 Hyurk!
The short-lived novelty of Explod-O-Perp aside, theres honestly little else of interest to grace this utter failure with a second glance  except maybe that heated encounter in which our arresting emerald-haired protagonist must do battle with a towering heap of sentient refuse! Her ferocious barrage of swift-sailing needles pierce this fangorious creatures bulk as it emerges from the poisonous murk to unleash searing beam attacks that must be quickly avoided by way of her graceful, soaring leaps! No, wait . . . thats some sort of cross between Shinobi III and El Viento.

Hold on, that would be awesome!

Just imagine it, evading scantily clad ninja girls and deadly axe-swinging midgets while swinging to and fro above pits of glowing toxic ooze . . . scampering up the heights of the Empire State Building while being relentlessly pursued by blood-drinking winged brains . . . or hanging ten on your rocket-powered surfboard looking to thrash ludicrously pixelated octopuses with your Peruvian ninjutsu magic! Oh man, just thinking about it gives me the shivers.

Thats not to say that Technocop cant make me shiver, but its not quite the same.

If you enjoyed this Techno Cop review, you're encouraged to discuss it with the author and with other members of the site's community. If you don't already have an HonestGamers account, you can sign up for one in a snap. Thank you for reading!

© 1998 - 2022 HonestGamers
None of the material contained within this site may be reproduced in any conceivable fashion without permission from the author(s) of said material. This site is not sponsored or endorsed by Nintendo, Sega, Sony, Microsoft, or any other such party. Techno Cop is a registered trademark of its copyright holder. This site makes no claim to Techno Cop, its characters, screenshots, artwork, music, or any intellectual property contained within. Opinions expressed on this site do not necessarily represent the opinion of site staff or sponsors. Staff and freelance reviews are typically written based on time spent with a retail review copy or review key for the game that is provided by its publisher.