Meet David Goldman, aspiring photographer and depraved American freak. Daves always up for quiet walks by the seashore or squeezing his face in between an ample pair of breasts, but his favorite pastime is probably a bit less familiar to most of you. The young mans mission in life? To set out into this wonderful world of ours and capture the sickest, most distasteful situations imaginable solely for his professors own twisted amusement! Not that I blame him or anything. Honestly, who wants to see a boring snapshot of some chick walking a tightrope? Now, a quick pic of her falling from the tightrope  thats what I call photojournalism!

So while its not a pulse-pounding shoot em up or a tight action platformer  not even an RPG with steamy shower scenes  Gekisha Boy isnt an experience youre likely to forget. Dont look at me like that. Its not a bad thing by any stretch of the imagination when you consider its inventive premise, rigid challenge, and vibrant graphics . . . but mostly the hearty helping of SMUT, SMUT, SMUT. 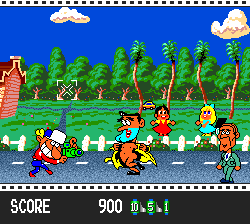 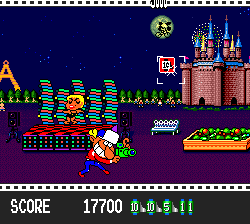 Because in an eccentric universe where UFOs leisurely float across the horizon alongside the odd caped superhero, you certainly wont lack for any of these things. With the screen scrolling forward automatically, youve got to move David and his cameras crosshairs into position to capture all these disreputable scenarios on film before they can slip away, each one worth a certain number of points based on its potential hilarity. Sometimes theyre merely a bit embarrassing, like the businessman slipping on a banana peel, but just as often youll notice a jet unexpectedly crash into flaming ruin. And while the PC Engine is practically older than dirt itself, the lurid cartoon-like visuals are really impressive with their demented scenery and outrageous character designs. Take our little shutterbug himself, who sports an ominously leering grin plastered right under his bulbous nose, or the mildly racist depictions of various ethnicities  or the countless appearances of celebrities who would probably file venomous litigation if they only knew. Of course, even your encounter with Marilyn Monroe and a predictably-placed gust of steam is no match for the suspicious looking man wearing lipstick and a five oclock shadow. Yes, a man who suddenly pulls open his trenchcoat and bares the sinister underworld of his nether regions for all to see! Better turn your eyes skyward, where youll merely glimpse a figure tumble out of its hot air balloon, and a struggling woman tied to the back of a rocket as it slowly lifts off into the stratosphere.

David starts each level with a limited amount of film, but snapping a picture of something strange in the neighborhood will earn him an extra roll or two. Of course that alone would make things pretty simple, so every scene is also crawling with diverse hazards to avoid: everything from bouncing balls and falling flowerpots to leathery claws reaching out from the earth with murderous intent! And every time youre clonked by one of these dangers youll not only lose precious film, but find yourself temporarily blinded and stumbling forth in a pained daze complete with stars dancing around your misshapen head  probably missing out on some really good stuff in the meantime! 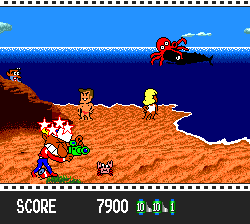 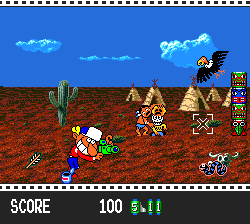 This is more significant than you might expect, because youre not merely attempting to reach the end of the level; the only way to successfully finish any of them is to exceed an ever-increasing goal of points. Moreover, each stage has a specific target (as indicated by your professor) thats worth a huge bonus and all but mandatory. Sure, you can technically slip by even if you miss it, but youd have pull out an otherwise perfect performance and youd still probably come up short in the end. Fortunately the developers went for unlimited continues so you can always try again, and whiles they neglected to include a password system to save your progress, there is a simple cheat code to let you start on any round you want.

Which is a damn good thing, because rigorous memorization is ultimately the key to ever finishing this game. Youll be replaying the levels an awful lot, as its exceedingly easy to miss nearly all the sweet, sweet filth during your early attempts. Many potential targets  like a flying DeLorean that instantly streaks through the sky without warning  will only offer up a few precious seconds to catch them in time; with everything going on you often have to know whats coming long before it actually appears. When youre in a pinch you can photograph a hazard in your path to make it disappear, which is practically worthless scorewise but definitely comes in handy as the later levels are literally swarming with them from top to bottom. Its not that Dave has a health bar or anything, but completely exhausting his supply of film via constant damage will cause the level to end pretty much instantly. Unsurprisingly, navigating through numerous obstacles while simultaneously attempting to move your crosshair over the good photo ops can make things damn frustrating  especially given the screens automatic scrolling and that the jumping is a bit stiff, which is to say that its a clumsy sproing! 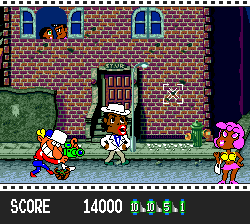 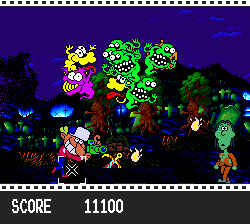 Therefore its likewise a damn good thing that the game yields so much satisfaction! Its eight rounds will take you far and wide, from deep beneath the sea to a little frontier justice in the Wild West. All these places are equally awesome, but for a perfect sampling of the abundant offensive material and blatant copyright violations to be found we need only take a peek at the second level. Strolling alongside dirty walls liberally spray-painted with the words KILL and FUCK, youll find yourself down in the ghetto surrounded by (gasp) Negroes! When hes not too busy aiming at windows to snag an unsuspecting lass in jeans and a bra (who quite understandably lets out a surprised kya!) our hero nonchalantly passes by such everyday sights as Spiderman and King Kong to snap shots of white silken panties as they delicately waft through the air. Yet while its always nice to stop and smell the underthings, dont neglect to take in the vehicular homicide, brawling drunks, dolled-up prostitutes, and beloved entertainer Michael Jackson  who quickly flees in terror after you take his picture with your mean racist camera, naturally.

Theres certainly much more to be seen, like a hot day at the beach enjoying the wonders of hungry sea monsters, fatal shipwrecks, and the firm backside of a young blonde (with no tan lines) whose towel has a disconcerting tendency to slip from her shoulders . . . but no doubt youll want to discover the rest for yourselves. That said, Id hate to overlook mentioning the horror shoot: a ghastly cemetery that teems with rotting zombies, head-twisting ghouls  and Michael Jackson again, out for revenge!

So dont waste my time with any sniveling excuses for missing out on this action unless youre a total weenie. Trust me, despite its somewhat awkward controls and memorization hijinks, this cards unique aspects outshine them like a greasy nerd with bad hair slouching next to a hulking Roman centurion! In short, Gekisha Boy is offensive, sadistic, and downright crude  so do whatever it takes to play it, even if it means mugging your grandma for spare change.

The old dear has it coming.

If you enjoyed this Gekibo: Gekisha Boy review, you're encouraged to discuss it with the author and with other members of the site's community. If you don't already have an HonestGamers account, you can sign up for one in a snap. Thank you for reading!

© 1998 - 2023 HonestGamers
None of the material contained within this site may be reproduced in any conceivable fashion without permission from the author(s) of said material. This site is not sponsored or endorsed by Nintendo, Sega, Sony, Microsoft, or any other such party. Gekibo: Gekisha Boy is a registered trademark of its copyright holder. This site makes no claim to Gekibo: Gekisha Boy, its characters, screenshots, artwork, music, or any intellectual property contained within. Opinions expressed on this site do not necessarily represent the opinion of site staff or sponsors. Staff and freelance reviews are typically written based on time spent with a retail review copy or review key for the game that is provided by its publisher.