TO ARMS, my heroic brethren! This is no time to be drinking your steel away in the company of flirtatious barmaids; nay, not even the winsome lasses with massive jugs (of ale). Prithee buckle on that trusty scabbard instead and extend your battlemace to the heavens  the insidious agents of villainy gather in our midst! Capering about as if in unholy pantaloons stitched from naught but 100% EVIL, these rapscallions dare to style themselves Heroes of the Lance. Bah! Everyone knows that real heroes are all about justice, honor, and armor that leaves practically nothing to the imagination! Ours, on the other hand, have been unceremoniously dumped into some moldy old ruins to run around in circles and all too frequently enter combat with vicious midgets that kick them in the shins. By the shining tears of Paladine, enough of that and Id probably fall to the side of vile wickedness myself!

Word of these scoundrels and their ignoble deeds has already spread far and wide amongst the peasantry, but then peasants are mere rabble and given to blindly follow popular opinion. Therefore if you were familiar with Pool of Radiance (awesome) or the rest of the Gold Box series (also awesome), you may have secretly been hoping for an excellent computer-style RPG fused with the epic tone of the Dragonlance saga. You might have hoped that this game gets its dismal reputation because of poor graphics, the complexities of the AD&D rules, or something equally asinine.

Hope is the denial of reality. 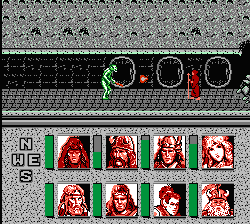 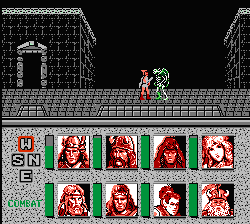 What you get is a wretched arcade maze game thats presented in the form of horizontally scrolling hallways rather than the proper first-person dungeon favored by distressed damsels and nude midgets the world over. Mind you, the visuals are terrible and the music repetitive in the extreme, but such things are barely worthy of mention when the actual gameplay is more slovenly than a goblin tribe at the royal ball. Youre supplied with a party of eight characters, but the leader is the only one who appears on the screen and actually does anything . . . excepting of course his invisible companions remarkable ability to take damage in battle without inflicting any of their own in turn. Naturally the two flimsy spellcasters have to be in the front row in order to work their craft, because the best place for a magic-user to stand is obviously right in harms way. Thus your lineup is always going to consist of Sturm Brightblade (the noble knight) or Caramon (the brawny bodybuilder) in the lead, closely followed by his brother Raistlin (the cynical sorcerer) and Goldmoon (the healer hottie). But lets not neglect those remaining four hardy heroes tucked away in the back row! Oh . . . wait. You wont use them. Ever.

And so your one playable character is left to navigate this ugly labyrinth of remarkably similar hallways and doors littering both background and foreground alike. Watch as Sturm ponderously spasms across the screen with an ungainly jerk, his curious stance perhaps indicating that the good knight splintered his jousting pole whilst adjusting his codpiece that morn. But fear not  after a few steps hell suddenly begin to charge forth into a jerky and uncontrollable run! Forsooth, now that youve steamrolled your way towards one of the foreboding doors of mystery you merely have to jam down on the crosspad for twelve or so seconds, that you might at last cross over into the next door-ridden hallway. Unless, of course, it was one of those imaginary doors that dont actually lead anywhere. Egads! Even in the (mostly) probable event that a door actually turns out to be, in fact, a door, youll still have to check your on-screen compass if you care to figure out where in the Abyss youre actually headed. But remember to stay on your guard lest you blunder into a fiendish trap; a few stones might fall from the ceiling. 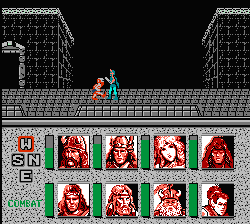 Speaking of fiends, not to mention blundering, these ruins are infested with more than just doors of dubious existence; all manner of horrific and poorly drawn monstrosities shall taste the poke of your battlemace this day! Alas, combat means standing in place and trading blows with the enemy until one of you succumbs to deaths merciful release. Yes, most of your opponents will just trot right on over and calmly proceed to wail away, which is to say that a few of their pixels extend towards your general direction. Much digitized huffing (OOF) and groaning (ARG) ensues as the two of you continue to whiff over
and over
and over again
until finally someone gets jabbed in the nadgers one too many times
OOF OOF OOF ARG
and explodes.
(BOOM)

Sometimes, however, the AI isnt willing to settle for plain old sloppiness and tries for obnoxious instead, thinking nothing of stacking a pair of enemy sprites on top of each other and allowing them to gang up on you with their double-thwack attacks. Meanwhile reptilian draconians constantly inch back from the fray to fling magic missiles with impunity, while hatchling wyrms chase you down and endlessly spew forth jets of flame so that you cant manage a single answering poke. Youll have to employ a downward slash if you want to hit one of those foul loincloth-clad midgets, something many apprentice heroes never quite figure out and so are shin-kicked unto oblivion. An upwards slash is required for those troublesome wraiths, but they keep fading in and out of reality anyway so its not really worth the bother.

But Im not trying to make this game sound overly difficult or anything, good heavens no. Haphazard yes, and indeed frustrating as hell, but its also incredibly easy! Goldmoon and Raistlin supposedly have a limited number of charges for their magical staves, but by the end Id only squandered about half of the former and barely put a dent in the stores of my mysterious mage. And believe me, I was flinging my thaumaturgic might about with reckless abandon. You can hold practically any enemy in place with a web spell and then pound your helpless foe into dust, singe them repeatedly with dinky fireballs from afar, or just conjure up a temporary invincibility and leap over the dumb bastards. So long as you dont mind either casting a mage spell every three seconds or cure serious wounds in the middle of every random encounter, emerging from this adventure victorious is pretty much guaranteed unless you fail to 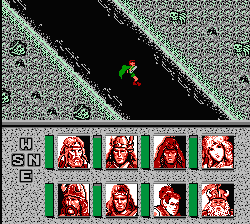 WATCH OUT FOR PITS
Jumping is incredibly awkward, especially considering that falling down a hole (AAAAAHHHHH) spells instant and irrevocable DOOM for the jumpee. Thus it should come as no surprise that there are a score of bottomless pits to be traversed on your way to the final challenge. On that note, if you should ever lose Goldmoons staff you are instantly and irrevocably screwed. Good thing you can save at any time, which is such a good idea that Im actually kind of surprised.

What wasnt such a good idea was the inventory system, to say nothing of the inventory itself. Snagging items is unnecessarily cumbersome considering that you have to go into the main menu, choose the take command, and then pick which item you wanted in the first place, even if theres only that one hunk of junk on the screen. Also consider that whenever a character should perish he gets punted to the very back of the line and drops everything he was carting around, which you then have to pick up one by one using this system . . . and thats not even getting into the tediousness of completely reorganizing your partys order to put his resurrected butt back where it belongs. Theres precious little point in hoarding all the coins and gems that dot the maze anyway  its not as if theyre actually used for anything. Sure you might get experience points for killing monsters and finding treasure, but thats just semantics; no one ever levels up, so you can just as easily avoid everything in the game. For that matter, you could just continually make yourself invincible and attempt to plough past all the random monsters with your flailing sprint and graceless hops, sparing yourself the suffering of this unending parade of foppish treachery.

Make no mistake, this is bad game  this is a terrible game  but its also playable, and thats enough to make it a step up from a lot of other crap on the NES. Its certainly a considerable improvement over the one on the Master System, which looks a lot nicer but manages to be the digital equivalent of laying your hand flat on a table and then repeatedly striking it with a hammer. The final boss in particular is the most pathetic thing Ive ever seen unless you somehow lost the blue crystal staff, in which case youll find yourself forced to start over from the beginning. Ah yes, its the perfectly villainous conclusion to a villainous tale of torture and deceit! But dont feel too bad; after all, the maze is so pathetic that if you actually bother to map it out youll find that you can finish this game in less than twenty minutes  thirty minutes tops. There, you see? Thats another thing in its favor. If something cant be any good, I figure it should at least know when to quit.

If you enjoyed this Advanced Dungeons & Dragons: Heroes of the Lance review, you're encouraged to discuss it with the author and with other members of the site's community. If you don't already have an HonestGamers account, you can sign up for one in a snap. Thank you for reading!

© 1998 - 2023 HonestGamers
None of the material contained within this site may be reproduced in any conceivable fashion without permission from the author(s) of said material. This site is not sponsored or endorsed by Nintendo, Sega, Sony, Microsoft, or any other such party. Advanced Dungeons & Dragons: Heroes of the Lance is a registered trademark of its copyright holder. This site makes no claim to Advanced Dungeons & Dragons: Heroes of the Lance, its characters, screenshots, artwork, music, or any intellectual property contained within. Opinions expressed on this site do not necessarily represent the opinion of site staff or sponsors. Staff and freelance reviews are typically written based on time spent with a retail review copy or review key for the game that is provided by its publisher.