What? You didn't want to buy a digital pinball game? That's ok, it's understandable. You bought a Sega Saturn to play games like Virtua Fighter 2, Sega Rally, Guardian Heroes, NiGHTS, Panzer Dragoon Zwei, and so on. You didn't want to waste your time and money on a pinball simulation, especially one with a corny name. No, really, I understand. I didn't like Hyper 3-D Pinball myself, at first. At the time, I wanted to play something "better", instead, so I just ignored it. But when I actually sat down and gave it a fair chance (years later, unfortunately), what I discovered was a well-crafted and enjoyable pinball game. It has all kinds of variety and interesting challenges that'll keep you coming back for more.

And variation is what you'll definitely get. You have the option to choose from six tables, each having a different theme: Roadking U.S.A., Fun Fair, The Monster, The Gangster, Star Quest 2049, and Myst & Majik. The themes don't end with just the names, either. The developers really went out of their way to make each table match their individual names. Fun Fair actually looks like a fun fair, with a roller coaster ramp, a miniature merry-go-round, a circus melody playing in the background, and "boing!" sound effects as you hit the bumpers. In Roadking U.S.A., the table is designed like a road map, and a rockin soundtrack, with a guitar solo that progressively gets more aggressive and louder as it reaches its climax, will play as you drive in and out of subways, speed up road ramps, and make quick pit-stops. And then there's The Monster table, which bases its look off of horror movies from the early movie years. It's also accompanied with a chilling soundtrack and spooky noise effects, such as a woman screaming, a cat screeching, and that infamous "Psycho" sound effect. With such a wide selection of tables and differing themes, it's one of the reasons why this game is so replayable. If H3DP just had one dull pinball table, you would've been finished with it within a day, due to boredom. 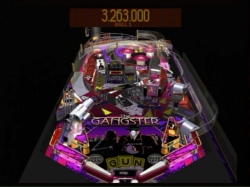 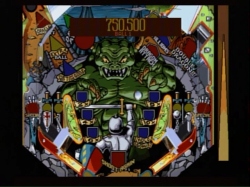 So, what's the catch? What makes this game so fun to play? Is there a gimmick? Well, there's no gimmick, unless you count those stupid FMV clips that play when you enter a certain section of the table. But, you have the option to turn those off, thankfully. What we have here is traditional pinball: stay on the board as long as possible, get as much points as you can, struggle to keep two or three balls on the table in an intense game of multi-ball, and take on many other challenges. These challenges range from trying to collect all the pieces of Frankenstein, so you can score more with the jet bumpers to shooting your ball into a garage, so you can make your way across the United States road map. Each table has a huge variety of challenges and secrets, that, it'll take quite awhile to discover and complete all of them.

It can be overwhelming at times to find all these places on each table, so the developers decided to include two different view points. The first view is an overhead perspective, where the camera follows the ball wherever it goes. The other one is a view of the entire table, like how you would see it when you normally play a game of pinball. The overhead view is good at first, mainly for locating certain areas, but I wouldn't recommend using it once you get to know each table's layout. The fact that the camera has its eye locked on your ball at all times, you'll have a hard time knowing where the ball is going to end up next. This can be frustrating, especially when you try to aim for something or when you think the ball is gonna land on a flipper, but goes down the middle, instead. 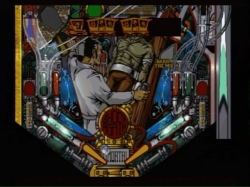 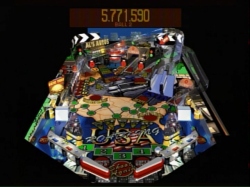 Another problem I had was with the Star Quest 2049 table. It was so insanely easy, yet impossibly hard at the same time. It's sooo simple to get extra balls here, that, by the time you're up to your second try, you'll have at least two or three extra balls. This does sound like a good thing for beginners, but with all of those extra balls, you can end up playing for over an hour and be bored out of your mind. And the table can be frustratingly hard, because of the way some challenges are set up. Whenever you begin a timed challenge, the table will send you through the jet bumpers, first. These three jet bumpers are undoubtedly the worst bumpers in the entire game, you can be stuck between these things for up to a minute. That's terrible, because the timed challenges only last for about a minute or less. That just hardly gives you any chance left to go up a certain ramp three or four times to complete the challenge.

But despite these minor annoyances, Hyper 3-D Pinball is a solid title. With a nice selection of tables to choose from and a load of things to do on each of them, you'll be replaying this game constantly, determined to take on task after task. Pinball lovers will definitely love this, but I'm pretty positive everyone else that's willing to play the game, will also enjoy it. Give the game a chance, don't be turned off by the fact that it's just a normal pinball game, and you'll end up with one satisfying title on your hands.

If you enjoyed this Hyper 3-D Pinball review, you're encouraged to discuss it with the author and with other members of the site's community. If you don't already have an HonestGamers account, you can sign up for one in a snap. Thank you for reading!

© 1998 - 2022 HonestGamers
None of the material contained within this site may be reproduced in any conceivable fashion without permission from the author(s) of said material. This site is not sponsored or endorsed by Nintendo, Sega, Sony, Microsoft, or any other such party. Hyper 3-D Pinball is a registered trademark of its copyright holder. This site makes no claim to Hyper 3-D Pinball, its characters, screenshots, artwork, music, or any intellectual property contained within. Opinions expressed on this site do not necessarily represent the opinion of site staff or sponsors. Staff and freelance reviews are typically written based on time spent with a retail review copy or review key for the game that is provided by its publisher.