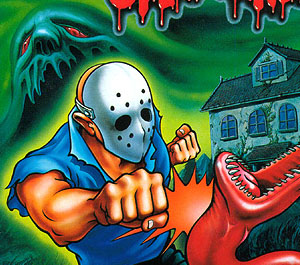 Anyone with even a passing interest in the TurboGrafx 16 has heard of Namcos SplatterHouse  originally a grisly action coin-op that managed to get itself banned from various arcades across the country, the Turbo port similarly spawned quite a bit of controversy for the prominent aroma of B-horror cheese and buckets of gore that youd be hard-pressed to find on any other console at that time. Our tale begins with a gloomy manor nestled deep within the woods on a rainy night. Seeking cover from an approaching storm, Rick Taylor and his girlfriend Jennifer scamper for shelter inside the old, seemingly abandoned house  the former home of vanished scientist Dr. Herbert West, a madman rumored to have performed the most bizarre and grotesque of experiments in his attempts to reanimate dead tissue. Jennifers blood-curdling screams suddenly emanate from inside just as a flash of lightning lights up the sky; a moment later the young lady is nowhere to be found, leaving us all alone with Rick . . . or at least his lifeless body.

Yet a sinister presence recalls him to the world of the living  revived with a chilling mask bonded to his face, our undead hero must rend his decaying hosts from limb to diseased limb as he attempts to rescue Jennifer from a fate worse than death within the depths of the SplatterHouse. His features concealed behind the suspiciously familiar visage of the gaunt Hell Mask, our friend Rick appears to have wandered straight out of the reprehensible Friday the 13th films: a hulking ghoul practically bursting with sinewy muscle from beneath his ragged clothes. He is easily capable of reducing his enemies to bloody pus with his bare knuckles  or instead place his meaty hands on a number of weapons with which to bludgeon, mutilate, and otherwise inflict grievous anatomical harm upon the many freakish horrors inhabiting the West mansion. 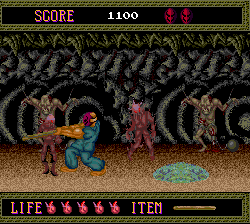 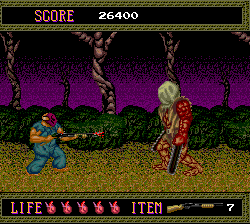 Horrors such as the foul chained zombies retching pools of toxic goo in Ricks path or thrashing (well, twitching) upon wooden stakes while toothy parasitic leeches bore out of piles of rancid meat looking to firmly affix their maws to his brawny flesh. Delicious. A scenic walk along a forest trail in the cold rain sees Rick punching groups of approaching ghouls into ooze, which naturally invites skinless canines to creep forward for a quick snack on their gooey remains. Bulbous deformed carcasses meanwhile twist in the wind as they hang from ropes in the trees; toss a nearby rock at once of these uglies and it splits open upon impact to discharge a large puddle of oozing glop. Lurking at the end of the path is a leathery-skinned creature with chainsaws grafted to the stubs of his arms, his misshapen head tightly wrapped within the confines of a cloth sack. This disfigured killer offers no place to run after you empty your shotgun into his massive chest.

But while theres certainly plenty of carnage to be found, unfortunately the arcade faithful will discover this SplatterHouse to be a shadow of its parent. To its credit the Turbo is capable of delivering large characters that are almost as detailed they were in the arcade, but the animation has been noticeably savaged and the backgrounds heavily scaled back or sanitized; gone are such delights as piles of ravaged corpses still clawing in agony, giving the levels an overall drab and nondescript appearance. Alas, the violence has also been toned down; instead of severing heads left and right with a cleaver, Rick now bashes ghouls into the unforgiving wall with a hefty 2x4. On the aural front, the music is strained by the systems sound chip but nonetheless faithful to the original score (despite the removal of the inappropriately cheery necromancer theme, the heathens) and succeeds at establishing an appropriately dark and creepy mood. The once impressive sound effects do not fare nearly as well, however; the pained moans, terrified screams, and enormous crashes that once filled the arcade are nowhere to be found, leaving those effects that remain scratchy and weak. 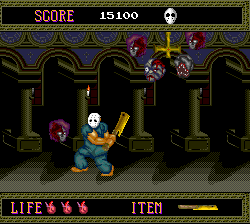 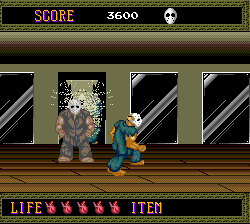 Its arguable whether these omissions were the work of censorship (probably true to a degree) or merely the enforced limitations of the hardware, but the further changes made only to the US version leave no such doubts. The most obvious is Rick himself  fearing reprisal from Paramount, our hero now dons a blood red mask instead of the goalie-inspired headgear that weve all grown to love in a pathetic attempt to evade the threat of litigation. (The manual also claims that our hero was knocked unconscious rather than killed at the beginning of the game, but we know better.) In addition, the possessed inverted cross normally encountered in a gloomy chapel has been replaced by a rotting head, as decomposing flesh is for one reason or another considered less offensive than the perversion of religious iconography.

Admittedly, all of this should come as little surprise; historically console ports have always lagged behind the arcade games they were based on. But ignore SplatterHouses gruesome theme and youd be left with an overly familiar and otherwise inconsequential sidescroller with sluggish controls; Rick is incredibly slow and his jumps are far too stiff, often resulting in unfair damage as he awkwardly bounces into a hazard or plummets into the occasional pit. His lone special maneuver, a sliding kick, is produced by hitting the attack button as soon as he descends from a jump  seemingly by luck rather than timing, rendering it unreliable in a pinch. This is nevertheless fair entertainment  if enjoying a game crawling with disembodied hands that may or may not be making obscene gestures is wrong, I dont want to be right  but its obvious that gameplay at the West residence takes a firm backseat to splattery gimmicks. 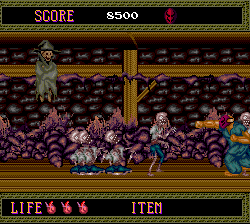 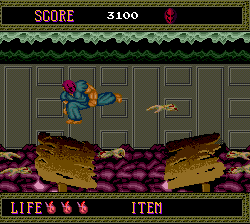 Fortunately Namco thought to alter more than merely the sordid visuals as the difficulty has also been considerably reduced. Rick can always absorb five hits before collapsing in a heap (as opposed to the arcades default two), which shouldnt happen as often since the enemies are far easier to deal with, and the damaging tendrils of ectoplasm formerly known to edge their way towards Rick from behind are nowhere to be found. Thats not to say that its easy, as it maintains numerous tricky spots that require practice to overcome, but those who have played the original (to their frustration) will find it far less exasperating. Veterans and masochists, however, will be pleased to note that a secret Hard Mode has indeed been included for all their controller-tossing needs. And just like the arcade, certain levels toss out the occasional alternate route in the form of a pit or ladder leading to a different set of screens and perhaps allowing you to circumvent a difficult area  but generally making things a lot worse.

Ultimately retaining that macabre sense of style that distinguishes SplatterHouse from the chaff and makes it worth playing, our story at last climaxes with an extremely twisted boss encounter in the fifth stage before quickly winding down for the final two chapters. Initially placing our hero in a tunnel of what appears to be organic tissue to battle embryonic horrors that latch onto him only to burst into an ichorous mess, one must elude invulnerable fiery phantasms that crash down from the sky in the midst of an inferno before coming face to face with the misshapen source of the houses evil. Those who demand the uncut experience will find themselves tracking down either the coin-op itself or the scarce but arcade-perfect conversion for the FM Towns  but for all its little failings this incarnation of SplatterHouse, while a far cry from a Legendary Axe or Ninja Spirit, is regardless a HuCard worth slithering up to in the dead of night.

If you enjoyed this Splatterhouse review, you're encouraged to discuss it with the author and with other members of the site's community. If you don't already have an HonestGamers account, you can sign up for one in a snap. Thank you for reading!

© 1998 - 2022 HonestGamers
None of the material contained within this site may be reproduced in any conceivable fashion without permission from the author(s) of said material. This site is not sponsored or endorsed by Nintendo, Sega, Sony, Microsoft, or any other such party. Splatterhouse is a registered trademark of its copyright holder. This site makes no claim to Splatterhouse, its characters, screenshots, artwork, music, or any intellectual property contained within. Opinions expressed on this site do not necessarily represent the opinion of site staff or sponsors. Staff and freelance reviews are typically written based on time spent with a retail review copy or review key for the game that is provided by its publisher.