Hey there all you sweet little boys and girls, I hope youre ready for something really . . . special. How would you like to go on a totally magical journey of action and discovery with your super big brother, the vaguely glistening King of Pop  MICHAEL JACKSON???

Yeah, neither would I.

But thats okay; you can still enjoy the demented workings of his pasty-faced head without all the hugging and offers of sticky lollipops thanks to SEGAs vintage action coin-op! Maybe youre even familiar with their occasionally similar Genesis cart, or the bloodcurdling ego-trip of a film on which its (loosely) based, but the arcade experience is a parade of the hopelessly bizarre all its own. What might have simply been another straightforward isometric action game instead results in an unforgettable adventure the likes of which our eyes  and indeed, our world  may well never see again. Bold words? Then come along with our skeletal savior, no doubt having just emerged from a steamy tête-à-tête with one of his many nubile female admirers, as he boldly struts forth to rescue the children (the precious children!) from evils clammy grasp! Yes, our hero must contend with the diabolical forces of criminal mastermind MR. BIG, a callous villain whos not only mean, but a racist  and very, very devilish. 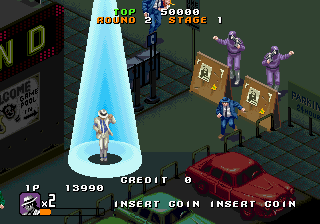  because its time to swagger on back to a fabled age in which our protagonist was still teetering over the edge of respectability rather than his irrevocable descent from beloved pop star into the grim specter of death that we all know and revile today! Decked out in his slick white suit and hat from the Jackson familys happier (fully clothed) days, this smooth criminal is most certainly the focus of SEGAs effort and his (ahem) unique personality shines through each and every pixel. Why, just leave him alone and hell bust out a funky dance routine unique to which direction hes facing  and since Michael detests icky things like guns or the light of day, his weapon of choice is a fantastical bluish-white light that emanates from his hands !

Too bad it has such a short range, but charge up the attack button and our hero will glibly moonwalk across the screen before spinning around to whip out his loooong . . . ego. Such creamy might will certainly come in handy as you blast away at the forces of MR. BIG and release his youthful captives from the rings of meanie racist energy that encircle them. Michael!, these succulent ragamuffins exclaim before darting away in terror from their rescuer  or either of his equally manly clones! Yes, in a dire prediction for the future MJ has been successfully replicated to allow for three players simultaneously partaking in this mischief! But dont run out of health or our hero(es) will collapse to the floor  hands nowhere to be seen  with an orgasmic Ooooooh.

Now its possible (however unlikely) that you might be muttering to yourself, Yes yes, thats all very well and good, but is the game any good? An excellent question to be sure, and one which I will now turn over to Michaels beloved chimp, Bubbles (the monkey in the tiny overalls):

What Bubbles means to say is that, were you to examine it in strictly technical terms, youd find an above average if brief overhead beat em up that has some decent MIDI renditions of its stars synthesized tunes but otherwise boasts nothing you havent seen so many times before. You know: a few power-ups here and there, a variety of hostages that just sit there in plain view, and a special attack that can wipe all the enemies off the screen. Even so, a glance at the previous few paragraphs should be more than enough evidence to convince you that Moonwalkers strengths or failings at distinguishing its gameplay from the countless other coin-ops out there are easily overshadowed by the phantasmagoric content that moves well into the realm of the truly surreal . . . 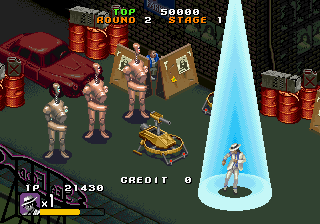 The first round may begin innocently enough (relatively speaking) with pistol-wielding thugs from the 30s and what appear to be stormtroopers clad in purple spandex, but it wasnt long before I encountered a trio of humanoid robots who suddenly began repeatedly pawing at their mechanized groinal areas right in front of the innocent children! And as if that wasnt enough, an even worse technological terror lurked just ahead. Picture an Imperial Walker from The Empire Strikes Back  only this big fellas looking to bludgeon you with the unbelievably phallic SIXTEEN INCHES of fully erect hydraulic battering ram that protrudes from between its metallic legs! While Im hard-pressed to name anything that can even remotely outdo the abject terror of death by RoboCock, naturally it doesnt end there. Oh no, after tearing up a seedy nightclub and proceeding to beat it on the street, I found myself in the friendly neighborhood graveyard mixing it up with rotting lavender ghouls and their shrieking zombie sweethearts, although the blatantly obvious musical choice of Thriller was, sadly, nowhere to be found.

What I did find was plenty of explicit bumping and grinding, as unleashing MJs screen-devastating special attack causes him to break into a blistering dance number, forcefully grabbing and tugging his crotch before his many foes explode into sensuous showers of flame. Those enemies dont just explode, either; first they all join in the fun and start GETTIN DOWN with their bad selves, their meanie old guns and decayed limbs alike jerking wildly in time with the beat! In fact, rather than conserving this assault for when its actually necessary, it seems that most players simply try to get as many different types of baddies on the screen so they can mock their ridiculous poses. Just imagine your well-endowed bipedal robot friend as his steel shaft begins ramming the air, violently plunging back and forth with wild abandon 

Assuming you can pull yourself away from all this fleet-footed, air-humping action long enough to triumph over one of the bosses . . . say, an unwieldy contraption full of tubes and hoses that unleash globs of ghostly goo even as MR. BIG croons, I LOOOVE you Michael  TO DEATH!!!! . . . all the grateful children scurry towards our hero and he opens his jacket oh so invitingly. Not that Im trying to imply anything; thats for the COURTS to decide! Truly my favorite part, however, is that all of this was designed by none other than Jacko himself; youre actually meant to take this without even a hint of satire, and doesnt that, perhaps above all else, really just make it so much better? Remember, kids: this is a game in which an ostensibly grown man scoops up a simian from the floor and subsequently becomes a steel-plated robot brandishing lasers and heat-seeking missiles  and it has nothing to do with the Japanese. 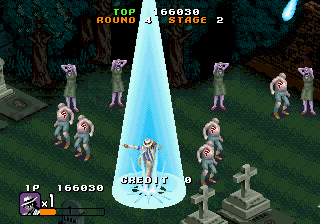 But as I watched Mr. Jackson transform into a galactic starfighter and victoriously soar into the lonely blackness of space, presumably headed for his home planet (or possibly to bleach the cosmos an ivory white), it suddenly became clear: the most loving thing you can do is share this game in your bed with someone. Analytically speaking its nowhere near SEGAs best and the bare mechanics merely settle for a cut above the norm, but for a charming, magical time, Michael Jacksons Moonwalker is a game that youll never forget  no matter how hard you try.

If you enjoyed this Michael Jackson's Moonwalker review, you're encouraged to discuss it with the author and with other members of the site's community. If you don't already have an HonestGamers account, you can sign up for one in a snap. Thank you for reading!

© 1998 - 2022 HonestGamers
None of the material contained within this site may be reproduced in any conceivable fashion without permission from the author(s) of said material. This site is not sponsored or endorsed by Nintendo, Sega, Sony, Microsoft, or any other such party. Michael Jackson's Moonwalker is a registered trademark of its copyright holder. This site makes no claim to Michael Jackson's Moonwalker, its characters, screenshots, artwork, music, or any intellectual property contained within. Opinions expressed on this site do not necessarily represent the opinion of site staff or sponsors. Staff and freelance reviews are typically written based on time spent with a retail review copy or review key for the game that is provided by its publisher.