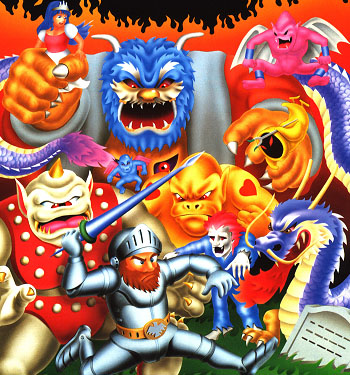 The night was going so well. Having stolen away for a bit of sweet, sweet sugar, the good knight Sir Arthur and his princess fair were enjoying a quiet evening amid the scenic charms of the local cemetery . . . that is, until she was forcefully abducted by the demonic forces of that wily old devil named Satan. Thus our noble hero did sally forth with lance in hand to slay this great evil in an infamous arcade challenge fueled by a hitherto unseen degree of ferocity thats enough to make your hands tremble as you reach for that towering stack of quarters . . . and it had better be towering, because youre likely to need every last one of them. The visuals that make up this adventure are altogether excellent, particularly as one pauses to consider their advanced age while battling spear-tossing ghosts within the depths of a ghoulish forest or climbing up and down a maze of ladders that lead past the deserted village's dilapidated houses before coming face to face with a slew of sizable terrors ranging from one-eyed ogres to serpentine dragons that brutally guard the levels' ancient steel gates  too bad youll never get to see most of them.

But you already recognized that fact as easily as the first levels music, didnt you? As has been amazingly well documented over the years, Capcoms Ghosts n Goblins takes the concept of respectable difficulty well past the point of merely "hard" and leaves it somewhere in the realm of "utterly ridiculous." Unrelenting swarms of enemies that often appear as if out of thin air are coupled together with harried jumps over frequent bottomless pits to make for a not so entertaining experience, as  unlike his later incarnations  Arthur is so shamefully powerless to overcome these challenges that it's really not worth the hours of certain frustration needed to master his sluggish movements and agonizingly unwieldy jumping abilities. Ironically, the deathly seriousness nature of the impending doom confronting you is offset by the humor in which its presented; disturb the rest of a sinister magician, for instance, and his foul sorcery will briefly transform Sir Arthur into a googly-eyed and bulbous frog who must rapidly hop away from danger if he is to survive long enough to regain his human form. Should our (non-amphibian) hero be hit even once, his armor will shatter apart leaving him to fend for himself clad only in his tidy white boxer shorts  another hit and this undeniably brave yet chronically undressed warrior will crumple into a mere pile of bones, a morbid fate that is admittedly rather amusing for the first twenty or so times it occurs.

Decidedly not amusing is the sudden appearance of the bane of many a players existence, the dreaded Red Armerrer. These crimson gargoyle horrors passively lie in wait until Arthur approaches them too closely, at which time they will suddenly swoop into the air to jerk and weave about while unleashing a hail of fireballs at our hero unless he can time enough his shots just right to ground such menaces. Unsurprisingly these demons are all too common and can be found in ever-increasing numbers as you (hopefully) progress, always in hot pursuit should one attempt to flee and are thus constantly dogging you throughout the stage. Before you know it youll have exhausted your meager supply of lives and find the game demanding another quarter in record time.

When he's not otherwise occupied with scooping up clay statues and skull-enstamped coins for bonus points  or dying horribly  Arthur can at least exchange his trusty lance for such fearsome armaments as the swift-sailing dagger . . . and the painfully awkward fireball attack that slowly travels in a lobbing arc, a weapon which, should you be misfortunate enough to pick it up, you'll want to get rid of as quickly as possible. Unfortunately, you wont really have the time to properly equip yourself; for good measure the developers made sure to include a severe time limit for each of the stages as well, forcing you to always press forward rather than take the time to assess a situation and possibly avoid a deadly mistake. Each of these levels are separated by only a single halfway checkpoint; lose a life on the gate's guardian after navigating through a particularly difficult area and you'll be sent screeching back towards the beginning  one could waste a small fortune on this cabinet and still fail to get anywhere.

Even if you could triumph over the wicked forces of Satan, prince of overtly unfair design, someone at Capcom apparently thought that it would be a jolly good prank to only then reveal to the wearied player that he must in fact beat the game a second time before it's properly finished, with this subsequent playthrough being filled with a vile cadre of savagely quick and aggressive nasties that are enough to induce a seizure in all but the hardiest of challengers. Haha Capcom, very funny. Playing Ghosts n Goblins will invariably provide anyone brave enough to pick up the controls with an undeniably intense trial by fire thats unlike any other; some may find the sense of accomplishment at successfully defying such odds to be worth all the aggravation, but everyone else will be left with little more than a pair of lessons in exasperating repetition and just how easy it is for a single game to devour all ones change in five minutes or less. How much patience do you have?

If you enjoyed this Ghosts 'n Goblins review, you're encouraged to discuss it with the author and with other members of the site's community. If you don't already have an HonestGamers account, you can sign up for one in a snap. Thank you for reading!

© 1998 - 2022 HonestGamers
None of the material contained within this site may be reproduced in any conceivable fashion without permission from the author(s) of said material. This site is not sponsored or endorsed by Nintendo, Sega, Sony, Microsoft, or any other such party. Ghosts 'n Goblins is a registered trademark of its copyright holder. This site makes no claim to Ghosts 'n Goblins, its characters, screenshots, artwork, music, or any intellectual property contained within. Opinions expressed on this site do not necessarily represent the opinion of site staff or sponsors. Staff and freelance reviews are typically written based on time spent with a retail review copy or review key for the game that is provided by its publisher.