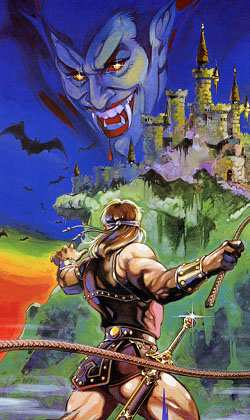 Wow, that really takes me back. I remember spending hours playing it. I didnt even take time off to sleep! I remember I was so pissed because I couldnt jump off the stairs!

Everyone felt that way, Gillian. It was very frustrating! According to statistical records, the teenage suicide rate increased dramatically in that year.

As black clouds slither across the moon overhead, our hero straps on his tight leather outfit and swaggers towards the rusty gates before him. Just ahead lies an ancient castle, its ruined spires consumed by the darkness; before this night is through, hes going to subject its occupant to the crack of his whip and a violent end upon his hard wooden stake.

But dont be afraid, this nocturnal miscreant is merely Simon Belmondo, lash-toting vampire hunter for hire, and hes setting off to fulfill his ancestral charge. You know the one: ridding the land of the dread Count Dracula and his legions of undying horrors dredged up from beyond the peace of the grave.

Of course, over in Japan this game (and series) was known as AKUMAJOU DRACULA. There it was released exclusively for the ultimately ill-fated Famicom Disk System, while the rest of us instead gushed over this mostly identical cartridge incarnation for the NES. It wasnt until as ridiculously late as 1993 that Konami finally brought our version back to its native shores as a (very) limited edition cartridge for the Famicom  with one rather important addition. The fact that youre reading this means that youre probably a Castlevania fan, so Ill bet youd like to know what that addition was, eh? Eh? All in good time, my impatient reader.

Whichever format you might choose, Simons journey will take us through six challenging levels cloaked in a feeling of pervading gloom. True, today its visuals are threadbare even by 8-bit standards, but theyre nonetheless suitably creepy with settings like the stone crypts that soon give way to a laboratory filled with ominous machinery, chained skeletons and piles of skulls. Particularly notable were the simple yet haunting melodies that struck a chord with us all for years to come as we slowly ascended desolate towers of reddish brick and deadly spike traps, or traipsed across the moonlit ramparts alongside ravens who perched atop the broken statues before giving flight and attempting to peck our hero's eyes out. Who can forget listening to the seminal tune Vampire Killer as one tread beneath the tattered red curtains and moldering walls of the first stage, whipping down groups of ghouls clad in ragged shrouds, and avoiding the panthers who would suddenly spring to their feet and lunge after us? Simon may not have a face, but he certainly has an atmospheric environment to blindly stumble about in. 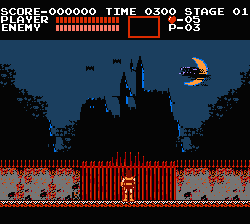 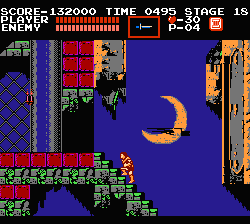 Theres no shortage of eldritch creatures for him to slay while hes there, like the horrifying guardian of that first level  youll fearfully stare into the baleful eyes of a hellish denizen spawned from deep within the foulest pits of the Abyss! Well . . . actually, its a giant bat. But they get better! Besides the Count, youll fend off many of the classic staples of monsterography: the lanky Frankenstein, a pair of tightly-wrapped mummies, and of course our good friend, the scythe-wielding Grim Reaper. It even established a good number of staples of its own, be they the carnivorous mermen that shoot up from the murky waters deep below the castle or the deadly gears of the clock tower high above. And while you wont run into any peasant mobs brandishing torches, you will encounter plenty of flickering candles.

Ah yes, the candles. In a fine example of Nintendo logic at work, these tallow sources of illumination that litter the walls in each and every hallway, occasionally suspended in midair, actually dispense the little red hearts that flutter down to feed your lethal arsenal. As youre no doubt aware, Simon can grab one of a small complement of sub-weapons that are frequently useful in various situations, armaments ranging from the axe that swings upward in a wide arc, to the fragile vials of holy water he lobs downwards to scorch the ground. Knowing when to take a new weapon you come across and when to keep what you already have often holds a noticeable influence over your success, as many bosses suffer from a profound weakness against a specific combination. Theres also much to be found secreted away if youre thorough  not merely treasure bags, crowns, and moai heads worth major points (and thus, extra lives), but also Double Shots and life-replenishing meat hidden in the walls or the nondescript blocks underneath your boots, just waiting to be savaged open by your probing whip.

Youll definitely need such things, as this game quite deservedly founded the series early reputation for offering a potent challenge. Unfortunately, most of Castlevanias difficulty actually stems from its draconian controls. Simon can only whip something thats directly in front of him, and the attack first requires a few seconds for him to wind up before the enemy will finally taste its punishing sting. Moreover, this enemy will merely shrug off your repeated assaults until it finally bursts into flame; if you get hit, however, our hero will tumble three feet back with a muffled oof, often careening backwards into a nearby bottomless pit that some sinister programmer thoughtfully placed there for your convenience. Speaking of which, any attempt to descend stairs adjacent to a ledge thats made without holding down on the crosspad will result in Simon plummeting to his doom; try a mighty leap up onto a staircase and hell sail right through it. The most famous pratfall, however, is the fact that you cant control the direction of a jump once youve dared to hit the button, making it rather unwieldy to avoid moving objects and often sending you straight into the rotting arms of a hitherto unseen danger as the screen scrolls forward. 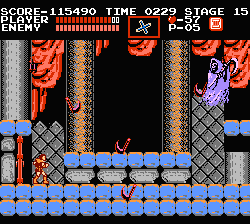 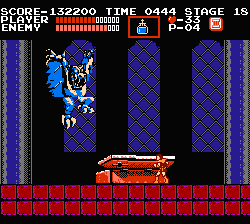 Couple that with the enemies Dracula throws your way and youve got the makings of a throbbing headache. Medusa heads that wildly swoop across your path to knock you off a ledge or interfere with your struggles against the projectiles of axe-hurling knights, bone dragons that violently snake up and down while spitting fireballs, and bleached skeletons flinging their femurs all over the screen with reckless abandon . . . all of these follow definite patterns and probably wouldnt be all that tough under normal circumstances, but theyre unusually treacherous thanks to Simons cumbersome ineptitude. Thats not solely the fault of the controls, either; in the later areas, he can only withstand a few hits before expiring. With only six levels, Castlevania is a pretty short game  but it doesnt much feel that way considering the patience it takes to master them.

This is pretty significant, as one of the complaints I frequently hear levied against Castlevania (as well as spiritual sibling Ninja Gaiden) targets its lack of a password system. I certainly would have appreciated one myself way back then; instead most of us simply became very, very good at repeating the levels over and over again until we could trounce them in our sleep. The rest simply went insane, never realizing that the Famicom Disk System allowed you to SAVE YOUR GAME. Now, remember how I claimed that the cartridge-based Akumajou Dracula boasts an extra addition? Well its not a battery-backed memory  you still have to start from the beginning every time you turn it on, just like the domestic cart  its the newfound inclusion of an . . .

Select this option and youll immediately notice that Simon has ten lives instead of the usual four and that he always begins with thirty hearts no matter how many times he might collapse into a lifeless heap. He wont be expiring all that often, come to that; the enemies inflict half as much damage as they normally do, and Simon doesnt even react when he gets hit  thats right, he doesnt hurtle backwards into a pit! Castlevania, The Adventures of Bayou Billy, and Draculas Curse: yet more evidence that Konami secretly has it out for us.

But despite its faults, this is still a strong game, if a typically overrated one. Today the first Castlevania may find itself hopelessly overshadowed by nearly all of its descendants; later installments added stunning gothic visuals, increasingly focused on multiple characters and divergent exploration to complement the traditional action, and steadily chipped away at the originals difficulty until they actually became too easy. Their great granddaddy nevertheless stands out as one of the creepiest games to be found anywhere on the NES and retains both the evocative music and the classic gameplay elements that are still the series trademarks. Its not the masterpiece that some might claim it to be, but neither is it a mere footnote for greater things to come. Its simply a game that, warts and all, is still pretty damn fun to play, plain and simple.

If you enjoyed this Castlevania review, you're encouraged to discuss it with the author and with other members of the site's community. If you don't already have an HonestGamers account, you can sign up for one in a snap. Thank you for reading!

© 1998-2021 HonestGamers
None of the material contained within this site may be reproduced in any conceivable fashion without permission from the author(s) of said material. This site is not sponsored or endorsed by Nintendo, Sega, Sony, Microsoft, or any other such party. Castlevania is a registered trademark of its copyright holder. This site makes no claim to Castlevania, its characters, screenshots, artwork, music, or any intellectual property contained within. Opinions expressed on this site do not necessarily represent the opinion of site staff or sponsors. Staff and freelance reviews are typically written based on time spent with a retail review copy or review key for the game that is provided by its publisher.