Once upon a time in a magical kingdom whose name shall mercifully remain nameless, there was a knight brave and true. Feeling a bit . . . randy . . . one day, our knight took it upon himself to strip off his clothes and embark upon a mighty quest. A mighty quest indeed it was, for the knights goal was nothing less than sexual fulfillment, his freakish endowment triumphantly pointing skyward towards the heavens.

As it happens, in this kingdom there was also a damsel  a very randy one, of course. Trapped high atop a sturdy tower that had surely been erected by evil, this damsel was very forlorn  her insatiable ruttishness had caused her to be separated from the naughty world by an expansive moat. Only by constructing a long and sturdy bridge with his hard bricks and gooey mortar might our hero, the randy knight, surmount this wet crevice and ravish said damsel into oblivion.

But alas! A wicked faerie, her foul heart no doubt twisted with jealousy and spite, had invoked the curse of the Atari VCS upon this sultry land, rendering the lovers nearly incomprehensible. Despite having repeatedly knocked the boots of adventure and thus observed many strange sights, the knight was nevertheless shocked to discover that the graphics were almost as confusing as that time he accidentally touched another mans package in the midst of a heated encounter. (Surely, he reminded himself, it could have happened to anyone.) Thus our hero was reduced to a messy blob of purple, his erect manhood of six pixels jutting from his loins at a rigid angle while bouncing merrily in rhythm with his pace amidst the many strolls back and forth along an ever lengthening bridge of love. 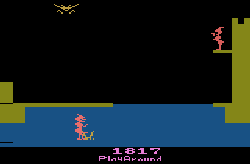 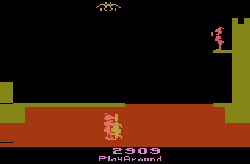 And so the knight, his nether regions tingling with anticipation, set about his work  grabbing his bricks and setting them down. With each trip he sauntered over to the ever distant edge of the bridge in progress and added a new block before returning to his plentiful stack for another; thus his path was extended trip by trip, brick by brick. Meanwhile a small dragon/owl/whatever hovered lazily in the sky above, but fear not, for it was impotent to harm him in any way. However, he soon learned to beware the hungry alligator which constantly emerged from the depths of the moat  time and time again he failed to avoid this toothy menace, our hero plunging into the waters with a frown evident on his normally lacking features as his kingly rod was cruelly bitten off by the scaly beast!

Fortunately no mere alligator could ever be a match for our heros proud battlemace, which would promptly regenerate and allow him to resume his bridge building otherwise unscathed for the experience. Yes, while other tales might rely on such concepts as lives and challenge, this one does away with them in favor of minor inconvenience. But as he proceeded further a small gremlin also made its presence felt, scampering down the bridge from behind our hero in pursuit of his backside! The knight was quick to leap over the fell creature lest he find its teeth firmly affixed to his rear, holding him in place that Mr. Alligator might again enjoy a hearty meal. This kingdom was born of a curious divinity indeed.

Take heart, O randy knight! For as you near the damsel she will cease her incessant waving and present her ample rump invitingly. Complete the last vestiges of your bridge and you might at last scale her stony cliffs for some knightly loving!

And then the alligator will eat you. Ah well, thats medieval courtship for you.

But egads, Sir Knight! You will now begin your quest anew for reasons unknown to man or alligator! Legends speak of a way to increase the magnitude of this quest, causing the dragon/owl/whatever to breathe fire (or possibly excrete waste, its rather difficult to tell) down upon the knight and his rapidly disintegrating bridge from above . . . but that is another tale. By my faith, this Knight on the Town is both excessively short and excessively pointless, its graphics laughable and its eroticism humiliatingly poor.

In other words, a quintessential example of Atari pornography.

If you enjoyed this Jungle Fever/Knight on the Town review, you're encouraged to discuss it with the author and with other members of the site's community. If you don't already have an HonestGamers account, you can sign up for one in a snap. Thank you for reading!

© 1998 - 2022 HonestGamers
None of the material contained within this site may be reproduced in any conceivable fashion without permission from the author(s) of said material. This site is not sponsored or endorsed by Nintendo, Sega, Sony, Microsoft, or any other such party. Jungle Fever/Knight on the Town is a registered trademark of its copyright holder. This site makes no claim to Jungle Fever/Knight on the Town, its characters, screenshots, artwork, music, or any intellectual property contained within. Opinions expressed on this site do not necessarily represent the opinion of site staff or sponsors. Staff and freelance reviews are typically written based on time spent with a retail review copy or review key for the game that is provided by its publisher.