Step right up! Plunk that shiny quarter of yours and hold the slightly moldering gun tight, for tonight we go monster hunting in a haunted castle! The best known entry in developer Exidy's prolific line of blast-a-thons, Chiller is in actuality a fairly average light gun game that does precious little to advance the genre. What does it do? Quite simple, really: the violence is incredible.

Yes, Chiller has carved a raw slice of infamy for itself thanks to a gruesomely graphic horror theme; the gore splatters freely as the evil dead and innocent humans alike fall into the line of our crosshairs and prepare to meet their respective makers. The squeamish or easily offended need not apply, as if such advice needed to be given. Four different screens comprise the journey from beginning to end, each with its own assemblage of creeps and crawls to blast back to the afterworld. The objective is simple enough  destroy the required number of nasties on each screen in order to proceed to the next; this amount varies from round to round and can be found at the top of the screen in the form of your friendly neighborhood Monster Meter. (What, your neighborhood doesn't have one? Foolishness!) The ragged hordes of hungry undead apparently suffer from exceedingly poor vision, for they will never actually bother to attack us in return. As that would make the game's difficulty rather pathetic, an ever-dwindling timer counts down the precious seconds remaining before doomsday, when the malevolent spirits of the underworld shall feast upon the unsuspecting alloy of your poor, innocent quarter. Every missed shot will result in a time penalty, so keep in mind that spraying the screen with machine gun fire is a definite no-no; accurate aim is the order of the day. 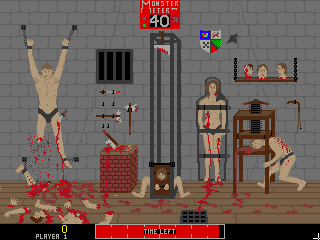 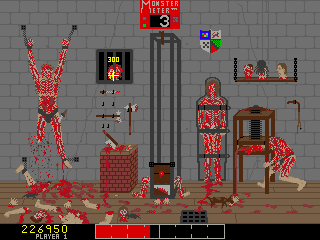 And what better place to start our adventure than in a nice, wholesome torture chamber, complete with practically nude men and women writhing in torment? Sometimes you just have to stop and smell the putrescence; bits of bodies lie carelessly scattered about the floor along with congealing puddles of stale blood, while flies and knife-wielding specters float across the screen in search of meat. A threadbare funeral dirge sets the tone for this screen as we take aim at the captive humans, their cries morbidly comical as their anatomy is reduced to flayed flesh and exposed bone, even as small bats flutter about and nibble on their soft throats. While we're at it, those interesting devices were bought and paid for, so we might as well put them to good use; the guillotine will shear its victim's head clean from the neck, or perhaps that skull-fracturing vise over there . . .

Delving deeper into the castle, another scene of pain and death greets us with the gurgling sounds of a river of fresh blood as it speedily oozes across the chamber. Four more humans lie bound on racks; shoot the gears to watch them slowly wrenched apart with an elongated popping sound. Another unfortunate meanwhile hangs suspended over the depths of this ruddy sea, and for every time you shoot the crank he is ponderously lowered a tiny bit further into its depths, gradually consumed piece by piece in the ravenous jaws of a slimy alligator. It's all part of the wonderful mystery that is the food chain. 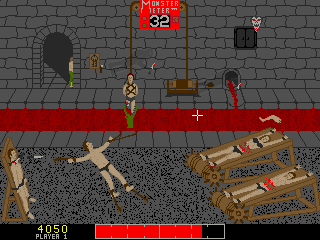 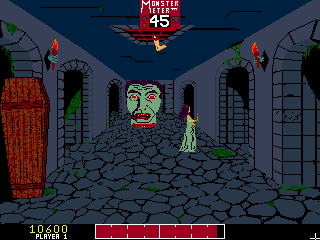 But medieval torture is merely one portion of a well-balanced diet, so our next stop is a long corridor haunted by vintage suspenseful music and dozens of frisky phantoms as they dart from doorway to doorway. The screen immediately begins in chase, as a sable-haired woman hastily flees a gigantic deformed head unless she should meet her ultimate fate in the depths a well-placed trapdoor; shoot the ground beneath her and the young lady tumbles into the darkness with a shriek. How unfortunate  she could have provided ample company for the hall's other corporal denizens: a curious giggling creature of green and a wolf with a taste for human appendages.

All of this indoor shooting is very well and good, but sometimes it's nice to get a little fresh air under the night sky, eh? Naturally we find ourselves in a scenic cemetery overlooking a shadowy chapel. Impaled heads greet us from the iron gates, their stares as blank as that of the motionless female buried up to her waist in cold dirt. Dont tell anyone, but your shots will cause her clothes to drop away . . . as well as her face and limbs. Reanimated hands claw their way free of the hard soil, exploding into a sanguine stump with a well-placed shot. One particularly agitated corpse severs his own head with a wailing moan accompanied by the crunchy sounds of snapping bone and tearing muscle, this restless zombie hurling his offending cranium into a blazing fire nearby. And just when you thought it was safe to play Mario Bros. again, the game starts anew with increasingly agile creatures, a higher number on the Monster Meter, and a stricter time limit. 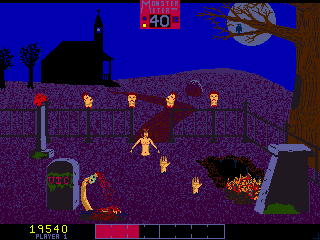 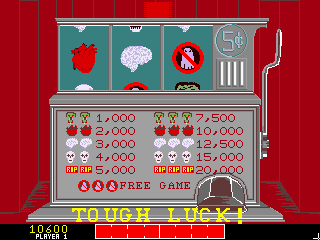 Every screen also conceals the added bonus of eight secrets to uncover in the midst of our voyage of discovery and wholesale slaughter; simply fire upon the appropriate location and a star will quickly flash to indicate success. The portrait of the castle that can be viewed between stages is covered with tiles depicting what these spots look like after being revealed, the helpfulness of which can range from blatantly obvious to confoundingly vague. To find these secrets we'll have to be either very thorough or very fiendish, as they often require hitting a nondescript wall or causing harm to some unfortunate individual; see, there was a reason for all of that wanton cruelty! Finding all the secrets on a screen is rewarded with one try on a slot machine for extra points or even a free game; discover the total of 32 and we're whisked off to a bonus round to shoot flying skulls, hearts, and severed heads of increasing speeds before one of them slips by and off the screen. WOW! Yes, it's something of a letdown for all of that effort, and the location of the secrets will never stray from their original position. Its enough to make even the most dedicated of sadists groan in disappointment.

Chiller is perhaps best considered a decidedly jagged contrast between artistic style and technical execution. As a pure shooter it's very short and quickly becomes repetitive; the secrets are a nice touch, but ultimately fleeting once they've been found. In terms of its content, however, Exidy has produced a memorably graphic thriller that would likely inspire concerned parents to take pause even today. The visuals are exceptionally smooth and detailed considering that this game hails from 1986, six years before Mortal Kombat became the poster child for video game controversy, and are sure to induce a sinister chuckle in any fan of cheap, tasteless horror. Remember, childhood trauma is an important part of growing up, so be sure to show this one to your younger siblings right before bedtime, okay? They'll thank you for it.

If you enjoyed this Chiller review, you're encouraged to discuss it with the author and with other members of the site's community. If you don't already have an HonestGamers account, you can sign up for one in a snap. Thank you for reading!

© 1998 - 2023 HonestGamers
None of the material contained within this site may be reproduced in any conceivable fashion without permission from the author(s) of said material. This site is not sponsored or endorsed by Nintendo, Sega, Sony, Microsoft, or any other such party. Chiller is a registered trademark of its copyright holder. This site makes no claim to Chiller, its characters, screenshots, artwork, music, or any intellectual property contained within. Opinions expressed on this site do not necessarily represent the opinion of site staff or sponsors. Staff and freelance reviews are typically written based on time spent with a retail review copy or review key for the game that is provided by its publisher.