A pack of bikini-clad female types leer at you suggestively from the title screen, silently teasing you to unload that sticky quarter of yours into the coin boxs narrow slit.

Lets play, they coo upon accepting George Washingtons metallic head; only too happy to oblige, you eagerly select the region of the globe where you will, as the game promises, MEET MANY HOT BEAUTIFUL GIRL.

Barely able to control your burgeoning excitement, you settle on one of the available lovelies and prepare yourself for the forthcoming titillation!

But whats this? There arent any girls (let alone hot beautiful ones) to be found here, merely a glowing silhouette set against a plain background! Thats right, Miss World 96 Nude is in fact a blatant rip-off of the deathless coin-op classic Qix  for those of you furrowing your brow in puzzlement, this means that you're supposed to reveal bits and pieces of the photo. How? By cutting out sections of the screen using a cursor that resembles an unusually randy Pac-Man. Simply depart from the edge of the screen with a glowing lifeline trailing behind you and head for another edge, the enclosed space filling in to reveal the hopefully naughty bits laying beneath. Chomping down at least 80% of the silhouette will complete the level and let you see everything  but make sure you avoid putting your mouth on something big and hairy . . . 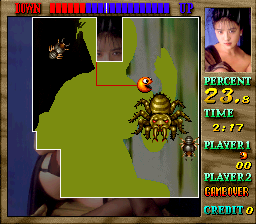 . . . a giant tarantula!
Yes indeed, a bulbous and malevolent-looking spider hungrily scuttles about the screen looking to sink its venomous fangs into your lusty little man. Allow this ravenous arachnid to touch you  or your lifeline  and you can kiss one of your three lives goodbye. Of course depending on the woman you might also find yourself attempting to elude the clutches of a slimy green alien whose supple tentacles shoot across the screen, or what appears to be a sinister satellite that fires a volley of ricocheting stars. You'll have to beat a pretty short time limit as well. That's right, when this game isnt sucking away your hard-earned money its making you jump through hoops like a fool just to see a bit of thigh  just like a real woman!

Maybe you were hoping for a quick score? That's a shame, because this is a game that punishes haste in the cruelest of ways; observe the seemingly innocuous meter at the top of the screen with its red squares on the left and several in blue on the right. Greedily devouring a large portion of the silhouette to reveal an expansive display of tawny ladyflesh will also cause that meter to inch its way towards the left. This is . . . not a good thing. The non-sexy background portions, however, work in your favor, much like the plain looking girl that one cozies up with in order to snag her hot (and intellectually vacuous) friend. These areas will swing it back towards the blue or even serve as a buffer to cancel out any penalties should you consume both at once. Eating the question blocks dotting the screen can either raise or lower the meter -- a risky proposition! Thus you should instead reveal tiny snippets of the picture at a time and remain well within the safety of the blue, your randy antics accompanied by ridiculous moans of pleasure and bawdy pleas to keep it up . . . And should the pointer ever move completely to the right it will mean an instant victory, the picture uncovering itself in all its shameless glory to a triumphant fanfare!

But allow that nondescript little meter to enter the red . . . 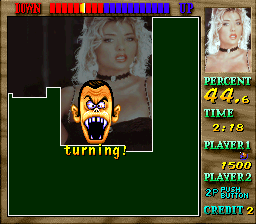 T U R N I N G !
Suddenly this sultry scene erupts into one of abject horror, the picture instantly morphing into a pair of sallow-faced corpses whose puckered, brutally grafted skin is cruelly pierced by bloody needles even as their mouths hang open to reveal broken teeth and voiceless screams! Or perhaps youll be one of the lucky ones and merely find yourself staring at Freddy Kruegers burn-ravaged features complete with tiny parasitic heads oozing forth from his putrid flesh! Meanwhile your speakers erupt into maniacal high-pitched laughter . . . as well as pulsating Eurodance beats! 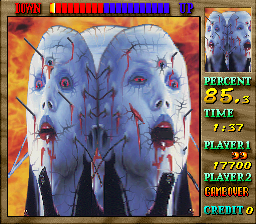 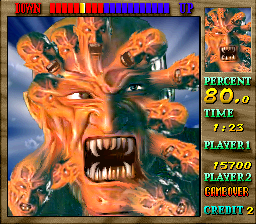 As the game revels in its sudden mood swing and throatily demands that EVERYBODY MOVE THE BODY!, its important to remember that beauty is merely a social construct, that these gore-drenched demonic damsels could quite possibly have wonderful personalities, and that you SHOULD UNCOVER THE BACKGROUND AND SEND IT BACK TO HELL! AAAAAAAAAGGGGGG!

At this point completing the picture or allowing the meter to hit rock bottom will result in the game taking a moment to cackle wildly before forcing you to start over again, but coerce it back up with some considerable border munching and the scene will return to that of a normal woman as if nothing had happened  other than that newfound sensation of a warm liquid running down the leg of your trousers, I mean.

Thus what might have seemed like a generic clone of a puzzle game is revealed to be an unforgettable night of explicit content  the wrong kind of explicit content. But even so: thank you, nameless designers of Miss World 96 Nude  thank you for your suspiciously obtained gameplay, for your bipolar balancing act between pornography and necromancy. Thank you for your HOT BEAUTIFUL GIRL tastefully presented with all the subtlety of a knee to the groin; after all, what isnt an improvement after witnessing a troupe of shrieking corpses? But most of all, thank you, good sirs, for imparting to us a pair of very important life lessons:

Lesson Number One: Attempting to weasel into a young lady's pants too quickly will often cause her to become a ghastly beast straight from the depths of Gehenna.

If you enjoyed this Miss World '96 Nude review, you're encouraged to discuss it with the author and with other members of the site's community. If you don't already have an HonestGamers account, you can sign up for one in a snap. Thank you for reading!

© 1998 - 2022 HonestGamers
None of the material contained within this site may be reproduced in any conceivable fashion without permission from the author(s) of said material. This site is not sponsored or endorsed by Nintendo, Sega, Sony, Microsoft, or any other such party. Miss World '96 Nude is a registered trademark of its copyright holder. This site makes no claim to Miss World '96 Nude, its characters, screenshots, artwork, music, or any intellectual property contained within. Opinions expressed on this site do not necessarily represent the opinion of site staff or sponsors. Staff and freelance reviews are typically written based on time spent with a retail review copy or review key for the game that is provided by its publisher.