Its time to put down that homemade broadsword, cleanse your palms of those bothersome Cheetos stains and choose your lot from the stalwart fighter, the pious cleric, the cunning thief  even the mysterious mage! Youll select a noble race, your well-endowed gender, and endlessly reroll those stats until you get them just right before setting forth to brave the dangers of the treacherous Moonsea! Therefore its a pity that all of the above (except for the hand-washing, hygiene is always a virtue) is completely meaningless, because all you ever do in this game is run through exasperating mazes picking up trinkets that you cant do anything with in order to advance a nonexistent plotline and reach the exciting conclusion  in which, predictably enough, nothing much happens.

Thus we enter the clutches of Hillsfar  an official Advanced Dungeon & Dragons product. Its generally a bad sign when an officially licensed release cant even spell its own name right, but theres no sense in nitpicking  not when the actual gameplay is a billboard unto itself. After riding into the city of Hillsfar youll find it to be rather lacking in terms of dragons, but it certainly doesnt skimp on the seemingly endless parade of fetch quests (retrieve this rare spell component for me, rescue the princess, find my pantaloons, etc) that lead you to seek out a dreary maze somewhere and open every treasure chest in sight until you discover some halfhearted clue . . . that sends you off looking for another dreary maze and so forth. Each class has its own objectives, which would theoretically add to the replay value, but that doesnt change the fact that the main activity to this game is inane and repetitive in the extreme. The only thing thats Advanced here is its state of decay. 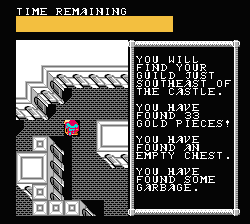 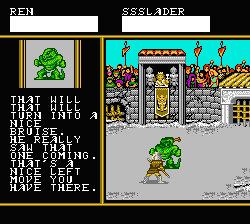 Observe: youre thrust into an ugly overhead labyrinth consisting of little more than walls, the floor, a nasty time limit, and your poorly rendered character sprite. These dungeons are also huge while the playing area doesnt take up even half of the screen, resulting in a ludicrous amount of scrolling as you senselessly blunder into walls, traps, and the unusually crimson arms of the law. Yes, the city guards begin to swarm onto the scene as your remaining time dwindles, often attempting to trap you into a corner (which is actually pretty easy due to the sluggish controls). Just to drag things out, their touch wont do anything to you until the clock finally runs out, at which point youll be variously booted out (minus your newfound booty), robbed blind, or tossed into the neighborhood coliseum for mortal combat with a slavering minotaur.

As for the traps, every one of these infernal creations is packed with teleporters on the floor as well, merrily transporting you to a completely different location within its walls. Oh, and theyre invisible. Lest you be fortunate enough to find your necessary clue early on, the programmers made certain that you cant leave the way you came in, either; youll have to wait for the exit staircase to appear around the timers halfway point, naturally in a random location (so lets hope you found that clue already). In the meantime youll dash about aimlessly to run afoul of the odd trapped chest while amassing the requisite (and mostly useless) gold, healing potions, and quite possibly a headache.

For there arent a merely few of these treacherous lairs, mind you, but dozens upon dozens upon dozens, all of which appear all too hauntingly similar. You can enter nearly every building in the city even if it ends up having nothing to with your quest. because theres nothing more heroic that breaking into the locals houses and making off with everything from glittering hoards of gold to smelly old clothes, right? Good luck attempting to pin down the location of your next bungling burglary; every location on the map manages to look and feel exactly the same  which is to say, excruciating. This cart was released in 1992, well after the introduction of the Super Nintendo, and yet raises the question as to who switched your NES with an Atari 5200 thanks to visuals that stand out as a stunning example of blah. The citys palette alone evokes a breathtaking sense of brown unseen since the early days of Faxanadu, and nearly everything takes place in abject silence, although when you hear the music it does have, youll likely agree that this isnt such a terrible thing.

Loiter about in these bleak environs long enough and you may be accosted by a random personage of questionable value, like the disheveled thief-type who offers his services in exchange for a percentage of your take. 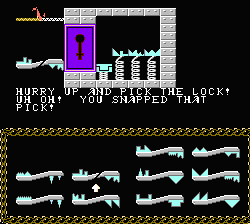 PROTIP: Do not hire thief.
Normally most of the abundant chests arent even locked, leaving those remaining few to be easily savaged open by way of your brawny arms, but elect to play as the rogue (or even just conscript one) and suddenly everythings zipped up tighter than a buxom wenchs corset! Picture a sizable number of abnormally shaped tumblers whose patterns must be painstakingly matched up with your twenty lockpicks and youve got the right idea  only theres also an(other) unforgiving time limit to deal with and choosing the wrong pick has a tendency to snap it in half to quickly render your tools of the trade useless! Mom was right; crime doesnt pay  unless youre the Japanese team that converted this game to the NES, but theyve probably committed seppuku by now anyway.

Oh, but our misadventures arent confined to the city alone! No, one must also trek across the surrounding wilderness to explore fantastically mysterious sites such as the wrecked ship and the old hut, which are in reality little more than the homes and shops of Hillsfar etched in slightly different shades of puke. More importantly, the reaching of these areas requires you to climb atop your trusty steed and avoid all manner of pathetic obstacles in a terminally annoying side-scrolling sequence that would probably be merely lame if the controls werent so poor. Your horse advances automatically, leaving you to pound down on the button whenever some dangerous object like the mighty rock or the dreaded stream appears in your path  and then, three or four seconds later, it actually responds, by which time your character is already soaring out of the saddle to kiss hastily drawn ground with a not-so-resounding thud. 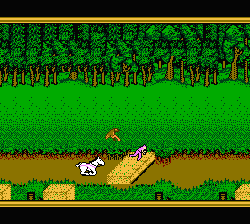 And just as you get up, an arrow darts out of nowhere aimed straight for your head! Too bad the shoddy responsiveness means you cant time your ducking properly before its too late.

Besides reducing your health, enjoying one too many falls will inspire your horse to bolt for sweet, sweet freedom to become a power-up in Gun.Smoke and leave you trudging back to buy another mount and start this mess all over again. As such, youre quite naturally forced to ride all the way back to a tiny campsite north of the city every time you want to save the game. Even better, a few of the areas on the map cant even be reached through normal means, thus you have to set the cursor to the ? icon and hope that you just randomly end up there. Eventually. Fortunately for aging controllers and dangerously cracked walls the world over, should you find the Rod of Unholy Blasting in your travels, you can temporarily turn its wrath upon the treacherous hay bales and mud puddles that foolishly bar your noble quest! Its a good thing, since theres certainly nothing else you can do with it; you know, like fight random encounters for experience and reach the next level or something.

In those brief instances when youre not occupied with the meaningless brigandry that makes up its villainous heart, Hillsfar also boasts a handful of equally pointless diversions. Diversions such as the aforementioned HEROIC arena combat in which you must do pitched battle with a series of uninspired opponents (like Morin, the knight you should fear) by constantly tapping the A button whilst jerking your stick back and forth, perhaps pausing in between rounds to quaff a healing potion  or perhaps strutting on down to the local archery range to shoot your load (of sling bullets) at myopic moving targets while the owner disparages the size of your . . . score. A real man, however, will head for one of the many (identical) taverns that litter the city, where one can regale himself with useless gossip, climb on the ceiling, and make the barmaid cry. Of course this is a Nintendo game, so youll suck down glasses of juice and mugs of root beer, or, if you feel you can handle them, the frothing tankards of pink lemonade.

In fact, the most fun I had in the realms of Hillsfar was the time my budding magic-user, having quaffed one cider too many, accidentally burned down the local watering hole before he was slain by chronic disinterest. Sadly, it was for the best; an extended encounter with this game is almost as deadly as a slender, pointy-eared elf and his long, polished bow.

And every bit as fey.

If you enjoyed this Advanced Dungeons & Dragons: Hillsfar review, you're encouraged to discuss it with the author and with other members of the site's community. If you don't already have an HonestGamers account, you can sign up for one in a snap. Thank you for reading!

© 1998-2021 HonestGamers
None of the material contained within this site may be reproduced in any conceivable fashion without permission from the author(s) of said material. This site is not sponsored or endorsed by Nintendo, Sega, Sony, Microsoft, or any other such party. Advanced Dungeons & Dragons: Hillsfar is a registered trademark of its copyright holder. This site makes no claim to Advanced Dungeons & Dragons: Hillsfar, its characters, screenshots, artwork, music, or any intellectual property contained within. Opinions expressed on this site do not necessarily represent the opinion of site staff or sponsors. Staff and freelance reviews are typically written based on time spent with a retail review copy or review key for the game that is provided by its publisher.