Viewpoint is really, really hard. The reason it's called Viewpoint, is because it utilizes a very unique VIEWPOINT. It's not completely revolutionary or anything -- you may have seen it used in Zaxxon already. Well, this game is also a shooter, also using an isometric point of view, where your ship is facing the top right of the screen, you know, diagonally. So it's somewhere between a vertical and horizontal shooter, all at the same time. Brilliant, right?

Well, even by Neo Geo standards it doesn't actually look brilliant if you observe carefully. But the VIEWPOINT makes things look decidedly 3D, and the polygons are shaded so brightly and nicely, in a generally non-threatening fashion, so the overall look is brilliant. I was very impressed when I first beheld this game in action.

And you'll be happy to know that the music follows suit! It seems that the theme behind Viewpoint is being different, because the music sounds nothing like any other score I've heard in a shooter. It's funky CLUB music, which leans a tiny bit to the elevator music level of tame inoffensiveness. Soft, jazzy organ stylings play over thumping bass, the kind that you'd hear on Friday night in your local nightclub. The combination is infectious! 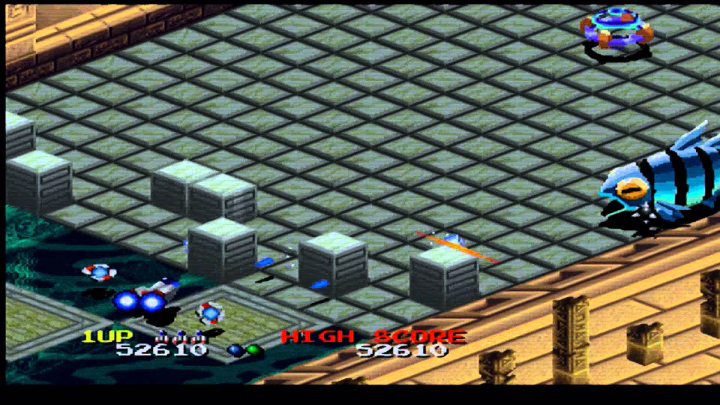 But how does Viewpoint play? Unfortunately, not quite as well as it looks and sounds. I've said that the game is hard, and that's okay -- preferable even, to fans of this genre, and I'm guessing you're one of those because you're reading this review. It's the reasons for the difficulty that are troublesome. I'm fine with the checkpoint nature of the proceedings; the game really needs this, because the checkpoints are where the power ups are anyway. But the view in Viewpoint takes A LOT of getting used to, to begin with. And enemy bullets do come at you with surprising velocity. That much said, all this would be alright if we just had more POWER on our side!

The hero's ship looks like the R9 from R-Type, and it moves about as slowly! You've got a basic cannon, and if you hold the fire button down, you can charge it into a more powerful, concentrated beam. Much of the gameplay surrounds your decision to fire rapid shots, or save up for big shots. And that's about it! You'll get twin helpers that are useful in giving you a bit more firepower and blocking enemy shots that come from the sides. You'll get bombs to help you out in a pinch, and there's some variety with them, which is nice. One is literally a firewall, one shoots homing missiles, and the other is just, well a big bomb with a funky circle glowing effect.

When you think about it, that's hardly enough. Those additions are supposed to be nice-to-have shooter perks, not Viewpoint banks heavily on them since it fails to give you any proper exciting weaponry. I imagine how great the game would be if you had a reflective laser! A lightning gun! A ring laser! Not only would things be more INTENSE but more FAIR because of how much better you would be equipped to mix it up with the enemy forces! 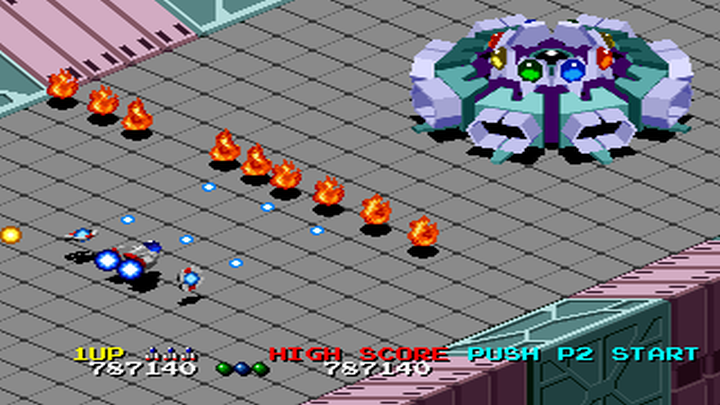 And the enemy forces are worth mixing it up with! When you get through level one's fences (you turn windmills with your shots to cause the fences to retract, how cool is that!), you get to tackle a great looking alien boss that lunges at you. Level two's watery beauty is home to seahorses and giant fish and jellyfish and a bubble spitting crab! Level three has centipede things, and so on!

Viewpoint has a great, crisp, clean, BRIGHT look, with a splendid cast of foes to blast. They're insanely tough on you though, and it only brings to light how insanely ill-outfitted you are. Things never reach the FEVER PITCH that they could have, if only developers Sammy had actually thought to furnish you with some amazing stuff to shoot back. All Viewpoint is missing is an awe-inspiring arsenal! It's such a shame.

In the end, the game is an almost-work-of-art with off-the-wall jamming songs and a castrated weapon system leaving an impossibly irritating hill to climb.
2.5/5

If you enjoyed this Viewpoint review, you're encouraged to discuss it with the author and with other members of the site's community. If you don't already have an HonestGamers account, you can sign up for one in a snap. Thank you for reading!

© 1998-2021 HonestGamers
None of the material contained within this site may be reproduced in any conceivable fashion without permission from the author(s) of said material. This site is not sponsored or endorsed by Nintendo, Sega, Sony, Microsoft, or any other such party. Viewpoint is a registered trademark of its copyright holder. This site makes no claim to Viewpoint, its characters, screenshots, artwork, music, or any intellectual property contained within. Opinions expressed on this site do not necessarily represent the opinion of site staff or sponsors. Staff and freelance reviews are typically written based on time spent with a retail review copy or review key for the game that is provided by its publisher.