This is The Raiden Project. It's also a cool way of describing a compilation of two Raiden games; remarkably enough, they are Raiden I and II. More interesting though, is the fact that the name, ''The Raiden Project'' might well describe what the game makers must have been up to: 'our mission is simple fellows! The Raiden Project will be to exercise any means necessary to ensure that there is a copy of Raiden in every home...'

You see, Raiden is one of those games that was only spectacular when it first game out, and yet, in all its present mediocrity it has managed to visit an impressive list of gaming platforms. The Super NES, Genesis, Turbografx-16heck, even the Atari Lynx had a version of Raiden grace its small screen.

What then, is the appeal? As 2-D overhead shooters go, Raiden is somewhat of a pioneer, but it can't stand up to most of its successors in terms of intensity. At the same time, you can't really go wrong with Raiden. True, nothing about it is particularly outstanding; but it has no real flaws either. It's challenging, and looks and sounds decent and as always, you get to save the world.

Now to dispense with history and move on to the real treat in this package: Raiden II, a game that commits the cardinal sequel sin of being simply more of the same. Yet the result in this case is rewarding, welcome, and satisfying. 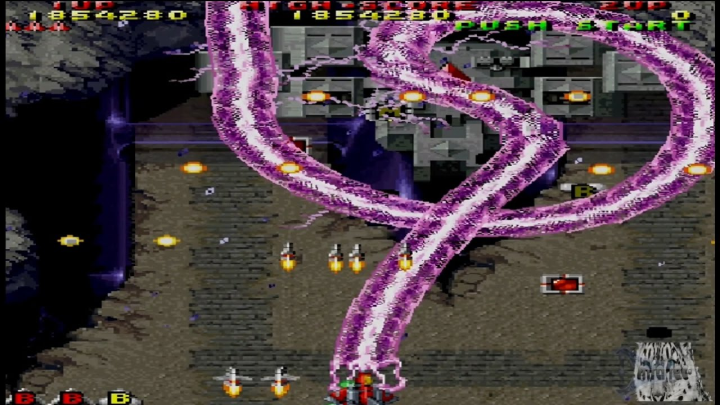 Raiden II is what Double Dragon II tried to be. A follow up game that is just like the originalwith almost nothing new added to make it feel like a different gameonly better. Arguably, Ninja Gaiden II managed the feat, and most definitely, Raiden II has done the same.

You'll notice immediately how much more detailed the graphics are (they're still the now cliched hills, rocky plateaus and deep space scenarios), how the sound is less tinny and the score less 8-bit sounding (though it still sounds like action game music). Most importantly, you will embrace the new weapon, which gives the game the depth it always needed. The player was always able to choose from the Red spread shot, and the Blue concentrated laser. It was one or the other. But in Raiden II, the totally unique Purple lock-on laser is introduced, allowing for a much different approach to the game. Thus, a different type of shooter fan is mollified and invited to play.

Briefly; the Red weapon is good for those 'safe' players who like to strafe from side to side at the bottom of the screen. The Blue weapon lends itself to those who want to play the game 'hard', as if it were a twitch shooter. The lack of the spread makes you move faster, and the power of the weapon makes the enemies die faster. 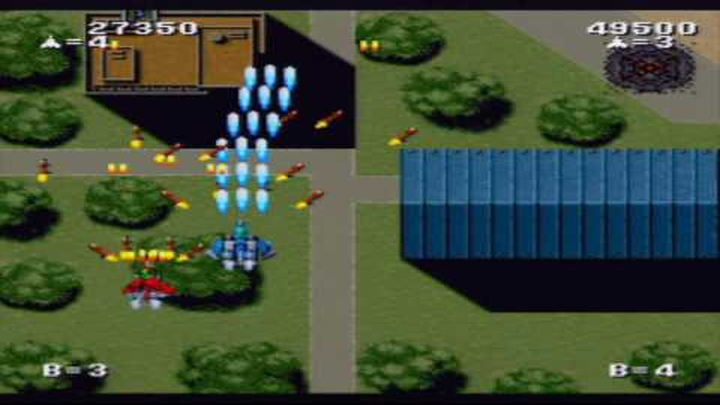 The Purple weapon allows for a more strategic approach, as you can decide at times to ignore weaker enemies completely, in favour of locking onto one of those powerful, multi-turreted tank bosses until he's dust in his very own crater. Also, once the laser beam is locked on, your lateral movement will twist and stretch the beam, encouraging not only more creative maneuvers, but giving the player something to 'ooh' and 'ahh' about as well (something lacking in the mostly bland original). These two factors surprisingly add much to the intensity department, in almost equal portions.

It's worth noting that the collection is slightly better than the similar R-Types assemblage by IREM, because here both featured games are at least decent. In the case of that infamous side-scrolling pair, the follow up is less than a shadow of its brilliant precursor.

To sum it all up neatly, if you enjoy shooters, The Raiden Project is worth a rent. If you enjoy vertical blasters in particular, then it's worth purchasing, as the game is a real Playstation oldie that is usually available for coffee and a donut money.

And finally, if you are a fan of the Raiden series, who poured your emptied G.I.C. funds into the two coin-op machines, and then experienced a brain cramp when trying to decide over all three 16-bit console offeringswhy are you still here, reading?

If you enjoyed this Raiden Project review, you're encouraged to discuss it with the author and with other members of the site's community. If you don't already have an HonestGamers account, you can sign up for one in a snap. Thank you for reading!

© 1998 - 2022 HonestGamers
None of the material contained within this site may be reproduced in any conceivable fashion without permission from the author(s) of said material. This site is not sponsored or endorsed by Nintendo, Sega, Sony, Microsoft, or any other such party. Raiden Project is a registered trademark of its copyright holder. This site makes no claim to Raiden Project, its characters, screenshots, artwork, music, or any intellectual property contained within. Opinions expressed on this site do not necessarily represent the opinion of site staff or sponsors. Staff and freelance reviews are typically written based on time spent with a retail review copy or review key for the game that is provided by its publisher.