Scramble spirits! Up, up and away!

I like the name of this game; it inspires images of graceful dogfights being carried out onscreen. That's not the reality unfortunately, but take heart. It's not all bad.

Scramble Spirits will remind you right away of 1941 and 1943. Like those better known, and better playing arcade titles, SS is an overhead blastathon depicting your quaint war plane taking on armies of colourful fighting machines, both in the air and on the ground.

This game was a much-needed addition to the Sega Master System's meager library of 2-D shooters. It's generally thought of as a bottom feeder, even on this system, and I won't try to convince you otherwise. Even with only a handful of titles in the genre, SS falls firmly behind exciting excursions like Compile's Power Strike 1 and 2, and the venerable R-Type. It's not even as entertaining as the decidedly mediocre Cloud Master.

But it's a shooter, dammit! And if you're reading this, you probably have some interest in this type of game. So let's forge on. 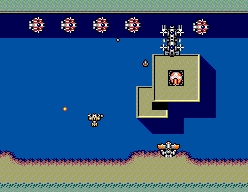 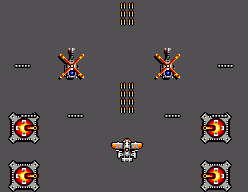 There are helicopters galore, and other simply drawn aircraft, all bearing down on you. You fire away gamely (or lamely?) with your basic peashooter. You manage to shoot down a power-up carrying fixed-wing fighter. Success! You eagerly swoop in to collect the precious icon. The result is a small pod that lines up adjacent to your craft and augments your peashooter with one of its own. Excellent! A second power-up earned, means a second pod added, up to a total of two. So once this happens, you are fully powered up. As you might imagine this is hardly awe-inspiring.

If one of your miniscule allies takes a bullet for you, it's gone for good. And all kidding aside, the firepower their guns provide do make quite the difference. Playing against certain bosses, your pods won't survive more than 10 seconds because of the amount of projectile material the end of level guardians spew forth. But the bosses almost require you to bring your pods to play, as your cannons won't deliver half the pounding necessary to dispatch your attackers in a timely or enjoyable fashion.

This fact kills much of the game's appeal. You need your power-ups to make the undertaking smooth, but they won't last. 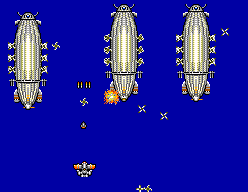 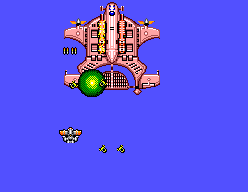 Remember Shinobi? Many of Scramble Spirits' audio tracks sound similar to that Sega favorite, and that's not a good thing. There's some good nostalgic power to be tapped by listening, but inevitably, you will realize that all that's being tapped are discordant tunes and bland beeping sound effects.

The game looks like an 8-bit version of 1941, only worse. The backgrounds are drab, and lack detail, and the choice of hue to fill them in only makes matters worse. There isn't much noticeable slowdown, but there is a heaping helping of flicker, something seemingly unavoidable in an 8-bit shooter. However, in better games with comparable flicker problems such as R-Type for this same hardware, enemy bullets were hardly as obscured by this failing as they are here.

What this adds up to is a substandard copy of 1941, a game that many already consider to be mediocre. Scramble Spirits has less power ups, less inspired sights and sounds, with some bad flicker and unbalanced boss encounters. The fact that it's a somewhat capable shooter on a system starved for them, earns it a near-passing grade, but don't expect a spirited experience.

If you enjoyed this Scramble Spirits review, you're encouraged to discuss it with the author and with other members of the site's community. If you don't already have an HonestGamers account, you can sign up for one in a snap. Thank you for reading!

© 1998 - 2022 HonestGamers
None of the material contained within this site may be reproduced in any conceivable fashion without permission from the author(s) of said material. This site is not sponsored or endorsed by Nintendo, Sega, Sony, Microsoft, or any other such party. Scramble Spirits is a registered trademark of its copyright holder. This site makes no claim to Scramble Spirits, its characters, screenshots, artwork, music, or any intellectual property contained within. Opinions expressed on this site do not necessarily represent the opinion of site staff or sponsors. Staff and freelance reviews are typically written based on time spent with a retail review copy or review key for the game that is provided by its publisher.