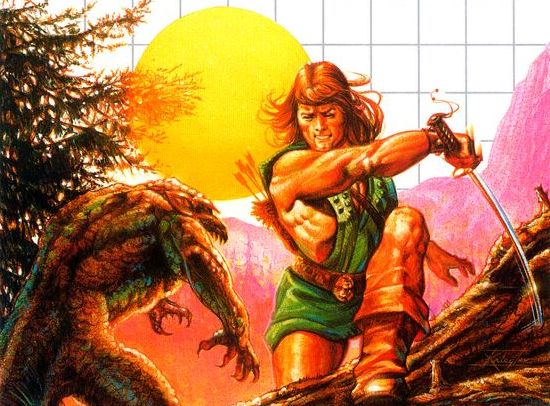 I'm in love with video games. I've been in love for years now. If you were to criticize me as a reviewer, as many do, I think you would point out how easy I am on games. Even the crappy ones find a special place in my heart, and when I write about them, no matter how incredible their baseness, it shows.

At the beginning, the early Master System side-scrolling adventure, Lord of the Sword, looked like it was no exception. The game is absolute crap, and yet... Isn't there something endearing about it? I mean, it's possible that the endearing thing is simply the fact that the game exists, and that I cared enough about it (as I do with all my electronic children) to play it to the end. In many ways, I treated Lord of the Sword (LotS from here on in) like a homeless vagrant on the streets of Toronto. He's got nothing going for him really, but there's still a spark behind his eyes--there is still some evidence of life, and of a spirit that tried to do right, but lost his way.

LotS has lost its way, and in a big way. It plays a lot like Castlevania II: Simon's Quest (released the same year), and that's not good to begin with. Simon's Quest was loved because it was a Castlevania game with great music and stupid puzzles that forced gamers to consult their ragged, ratty copies of ''Nintendo Power!'' for hints on how to succeed. It brought gamers together. Figuring out the conundrums in that game was like trying to pick a lock with a baseball bat. Bringing your mental prowess to bear was akin to bringing some ponderous object such as a battering ram into play against the backside of a watch face.

Fortunately, LotS does not mirror Simon's Quest inane puzzle solving. The story is bad, but simplistic. Baljinya has been taken over by the Demon Lord Ra Goan and his minions, and you, the mighty Landau, must reclaim the land and perform several pointless tasks along the way to pave the way for your success, and eventual ascension to Baljinya's throne. Unfortunately, while LotS doesn't confound with obscure ideas like Konami's game, it makes a wealth of different mistakes instead.

To begin, don't think of Lord of the Rings. Don't think of anything remotely cool, or anything bordering on epic, although LotS is epic in one very real sense of the word. It's long. And ridiculously so. In fact, it's unreasonably long for a game with no passwords or saves. You'll be at it for hours on end, endeavouring to protect your vitality bar (you've only got one life) with no opportunity to leave the pedestrian proceedings to do something else. You could pause the game, and go to the washroom, or down to the kitchen to get something to eat, but if you have diarrhea, or if you're a big person or a big eater, you'll be risking damaging your unit and TV screen by leaving them on for too long. 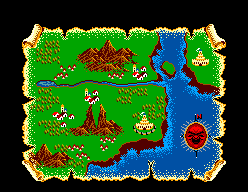 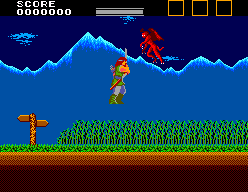 The second strike against LotS is its control scheme. LotS gives us two weapons for use in dispatching the various bats, giant eyeballs, red winged demons, skeleton swordsmen, white wolves, and evil spore-spewing plant life that populate the various environs. The mainstay of Landau's arsenal is your basic sword. The auxiliary weapon and weapon of choice in dealing death from a distance, is the bow. It's really cool the way you can hold down the button assigned to the bow to prepare it, before releasing that button to facilitate the actual firing. What's not cool is that the Master System controllers only have two buttons. I can hear you thinking out loud, your mind clunking. If the two different attacks use the two available buttons, how do you jump in this jump and hack 'n slash adventure?

Dear lord! Oh dear lord of the sword, may I be so bold as to tell you that this does not work? This is not Street Fighter II we're playing, or any other head-to-head fighting game, this is an adventure! Picking Landau up and off his feet by slamming on the already dodgy Master System directional pad does not bring about good effect. The lack of responsiveness would be even more troubling if not for one thing.

I'm not sure if it's by coincidence, but the game does not require that you jump over any bottomless pits, which is quite strange for a quest of this type. Even the bridge area, where water churns below, allows you to fall into the drink, and simply jump back onto the bridge without so much as a tiny hit to your vitality gauge. So because of the bad jumping mechanisms, the game forces upon itself gameplay limitations so as to prevent further frustrations. I can only imagine how bad it would be if there were Castlevania-type jumps over spikes with the present ''Up'' for jump set up.

Find a way to keep the system on while you clean your room to rest from the game, or play it three hours straight in order to clear it. You've managed to overcome the lack of saves and passwords problem! Huzzah for you. And, endure the poor control scheme by being a good sport, grinning and swearing. Congratulate yourself if your controller is intact after the end credits fade away. But the Sword that broke the Lord's back is the repetition. 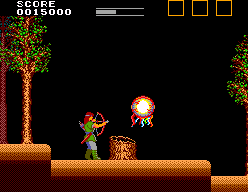 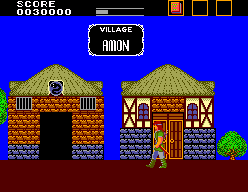 There are only a handful of locales in the game. You'll traverse the forest, the swamp, the bridge, the plains, the caves and the obligatory same-looking towns. All of these scenes will repeat themselves incessantly. What's incredible is that, more often than not, the programmers didn't even change the enemy patterns in a given scene! What this means to us, the stalwart adventurer, is that you will be hacking your way through a forest, move into a swamp area and get to a crossroads where you have to choose between a lateral route, or one that angles upward by way of some jagged staircase. You choose the higher ground. Inexplicably, you may end up traveling from right-to-left suddenly (despite entering the screen going left-to-right), in the very same forest that you scoured a few screens before. The enemies will be hanging in the very same position you found them in during your earlier meeting, only they will have considerately made 'about faces' so that they can greet you from the other side.

Even the townspeople will elicit actions of sheer redundancy from poor Landau. When he seeks the council of the single inhabitant of each town, his energy will raise a tiny bit. Therefore, by going in and out of the person's house about a half dozen times, Landau is able to heal himself. This pathetic tactic is especially useful because the single inhabitant will always have two messages. Sometimes he'll say the same message five times in a row, and so going in and out of buildings at least six times becomes normality, not only for your health, but to ensure you get the right messages. In one case, I only 'visited' with a home owner seven times and missed a vital communication: I would come to realize later that visiting an eighth time would have prompted the guy to open a new passage for me where before I had been faced with a dead end. This stupidity at work here speaks for itself.

LotS has struck out already, and yet there are more concerns, albeit of a lesser variety. We're aware that the story is bad, negligible. But it's also confusing. Why not allow the villagers to have more than two lines to say? And why not give us a working map? The manual has a hand drawn one that is hard to follow, and the in-game map (which can only be referenced from a town) is a useless mess of colour. The reality is that despite the trite plot, no map and cryptic clues equals confusion. And so, you're doomed to a sad experience driven by excruciatingly dull and witless tracking and backtracking through limited scenarios, all in an effort to guide Landau through the most insultingly basic of plots.

About the only positives going for LotS are the mostly colourful graphics, the large characters (Landau seems to be about twice the size as Simon of Simon's Quest), and the fact that it's an action-adventure game, and I like action-adventures. That's it.

The music consists of one tune for the action, one for the towns, one for the bosses, and one for the dungeons. Very soon after starting your quest, you'll have your headphones rigged to your stereo so that you can listen to your Insane Clown Posse or Backstreet Boys or whatever the hell it is you listen to. Anything is better than having a single bad tune droning along, dulling your senses with its sheer insistence. Yes, just one tune, because the 'action tune' is the only one that will get any serious play. Bosses like the disproportionate pirate and nearly inanimate tree demon are few and far between. There are only two bland dungeon scenarios (they are oddly reminiscent of those from Faxanadu, but worse). Towns aren't easy to find and offer little. So the 'action tune' is the one that will drill itself into your consciousness and remain imbedded there--despite your attempts to forget it--like a bad habit. 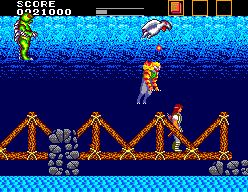 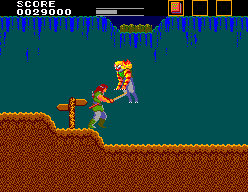 And as for me: this love of games despite their crappy stature is also like a bad habit. But I think I'm on the road to recovery. I think Lord of the Sword is my salvation. While it still paints a fleetingly bright action-adventure picture in my mind, besotted by benevolence, if I concentrate like I can, I start to really dislike it, just as I should.
1.5/5

If you enjoyed this Lord of the Sword review, you're encouraged to discuss it with the author and with other members of the site's community. If you don't already have an HonestGamers account, you can sign up for one in a snap. Thank you for reading!

© 1998-2021 HonestGamers
None of the material contained within this site may be reproduced in any conceivable fashion without permission from the author(s) of said material. This site is not sponsored or endorsed by Nintendo, Sega, Sony, Microsoft, or any other such party. Lord of the Sword is a registered trademark of its copyright holder. This site makes no claim to Lord of the Sword, its characters, screenshots, artwork, music, or any intellectual property contained within. Opinions expressed on this site do not necessarily represent the opinion of site staff or sponsors. Staff and freelance reviews are typically written based on time spent with a retail review copy or review key for the game that is provided by its publisher.