This erroneous statement is as common a falsehood as Ive come across in my years in the video game world. So Ill begin by clarifying: Blazing Lazers is a Compile shooter, a sort of bastard child of their Aleste series that culminated with Space Megaforce, (or Super Aleste) - the true follow up to Lazers if ever there was one. Super Star Soldier however, is part of a different vertical shooter family altogether. Star Soldier found humble beginnings on the NES, before Hudson did some major reworking, with much evident influence from Lazers, and released SSS on the Turbografx-16.

With that out of the way, onto more critical shooter nitty gritty. SSS's story is unbelievably weak; it is evident that no effort was made here. Apparently, the ''Brains,'' led by the evil ''Mother Brain'' (who else?) are threatening the world, and Starbuck (hey, that's us!) must pilot the Neo-Caesar into combat to stop them. God awful yes, but I expect you wont care much once you start shooting. Hudson, we forgive you.

The effort Hudson made in making a strong product follow up the similar masterpiece that was Lazers is admirable. Far too often, game companies simply ride on the coattails of previous offerings by their competitors, hoping (and not often in vain, I might add) that consumers will see similarities and bite. But SSS is actually a very solid 2D shooter, and is in some ways superior to the game it tries so hard to emulate.

Firstly, the graphics are sharper than in Lazers, and more detailed, inevitably coming off more serious. The enemies are standard shooter fare: large boss battleships face off with you, only after you manage to wade through fleets of lesser foes flying in fast moving formations. Whats notable though, is the fact that your craft is smaller than you might imagine for a game of this type. Somehow, this also adds to the more serious look of SSS, but more importantly it brings us to the next good point in the game. 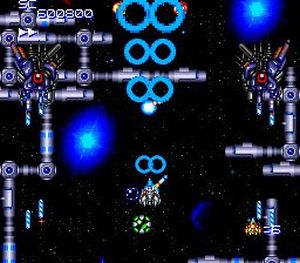 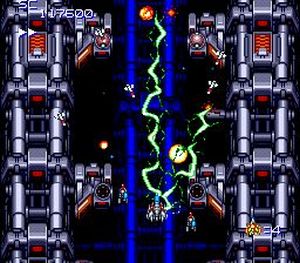 The challenge in SSS is very high, and very fair. The boss patterns are clever and taxing, and as I intimated earlier, the smaller scale of everything in motion on the screen simply allows for more of everything on the screen. More bullets, more enemies, trickier dodging patterns. And just as important: more bullet slipping on your part: your smaller ship allows you to pull off all manner of godlike projectile-evading mastery. There is some memorization to be done, but you must also have a clear head, steady hands and unblinking eyes to make it through some parts, regardless of any prior knowledge. The learning of difficult sections on its own will not save you - nor will your reflexes alone save you without some experience.

Its fitting then, that the game has typically competent Turbografx-16 style shooter control and options. You can change your speed with the select button on the fly, in four increments of velocity. SSS also offers four weapons to choose from. They are: red, a multi-direction shot that you start off with; blue, a ring shot that is quite useful; yellow, a powerful (though limited in range) flame shot; and green, an odd looking laser shot, which starts off weak, with little range, but becomes a relentless killer when powered up. As always, you can power your weapon of choice up, by picking up same coloured weapon items.

When your weapon is fully powered up, the next same colour item you grab will act as a smart bomb (more about smart bombs later). Being powered up has another benefit: small spheres that orbit your craft for your protection. The mini ships that you can acquire will provide even greater protection in much the same way in addition to those power up spheres (should you choose the ships over the homing missiles that serve as the alternate option available to you).

There is nothing really bad about SSS, as much as there are things that arent up to par with the brilliance of the game it pays homage to. For instance, the more serious look and feel of the game is appreciated in its contrast to Lazers, but it somehow makes the game feel like less fun than the anime-styled Compile hit. 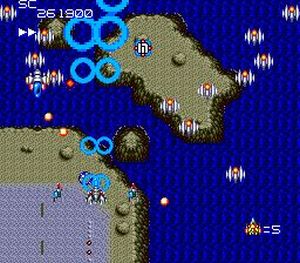 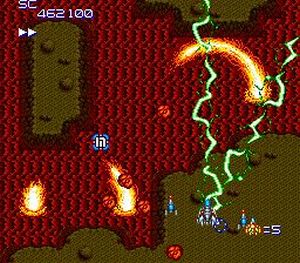 Also, the games score, while quite good, (it may be the best score of the series) cannot hope to match the score of its most direct competitor for the same system. However, this says more about the quality of the Lazers sound team, than it does for any lack of same in the SSS team. Expect a decent - and at times quite catchy - rock and techno soundtrack. What's really unfortunate is that the good tunes are paired with wholly unsatisfying explosions and dinky weapon sounds.

Perhaps a more notable drawback of sorts is the smart bomb omission. I cannot say for sure in all honesty whether this is a negative or not. I remember when I first played, I reached for the button that is normally reserved for bombs in most Turbo shooters, and when nothing happened I cursed the game. But now I see how it makes SSS even more challenging, and with the advent of the aforementioned power up spheres that revolve around your ship, providing some small semblance of safety (as you get hit the spheres disappear while the weapon powers down) you may eventually forget all about that perennial screen-clearing weapon. But novices may not.

Super Star Soldier may be the most solid title overall that the Star Soldier series has to offer. Hudson released a let down in the badly imagined Final Soldier, more than made up for it with the superlative Soldier Blade, before marring things with the nearly decent, but extremely disappointing Star Soldier: Vanishing Earth, on the N64, which may have helped the series on its way towards vanishing for good.

If you like vertical shooters, and you found Blazing Lazers too easy, Super Star Soldier is a perfect fit. While it has less personality, and lame sound effects - it is faster and harder, with detailed graphics and more than adequate, rocking music to see you through to the end - if you're up to it. Mother Brain is a tough... mother. Practice up.

If you enjoyed this Super Star Soldier review, you're encouraged to discuss it with the author and with other members of the site's community. If you don't already have an HonestGamers account, you can sign up for one in a snap. Thank you for reading!

© 1998-2022 HonestGamers
None of the material contained within this site may be reproduced in any conceivable fashion without permission from the author(s) of said material. This site is not sponsored or endorsed by Nintendo, Sega, Sony, Microsoft, or any other such party. Super Star Soldier is a registered trademark of its copyright holder. This site makes no claim to Super Star Soldier, its characters, screenshots, artwork, music, or any intellectual property contained within. Opinions expressed on this site do not necessarily represent the opinion of site staff or sponsors. Staff and freelance reviews are typically written based on time spent with a retail review copy or review key for the game that is provided by its publisher.