Dungeons of Naheulbeuk was silly, occasionally to the point of frustration, which is not the same as saying that it was stupid. On the face of things, it was a dungeon crawl undertaken by a bunch of caricatures, openly making fun of fantasy stereotypes. The stubborn, frugal dwarf feuding endlessly with the ditzy, hippy elf. The war-hungry barbarian broadcasting complete disinterest in anything that didnt include elongated stabbings. The gormless ogre meat-shield wearing a spaghetti strainer for a helmet and employing handfuls of vomit for ranged attacks. Their quest was a fourth-wall threatening meta-mocking of Dungeon & Dragons tropes, trying to locate a statue of a deity they couldnt pronounce while working against increasingly outlandish threats that shouldnt exist.

Naheulbeuk might have cast idiots to fill out its adventurers roles, but there was nothing funny about how seriously it took the mechanical workings of its off-brand D&D world. Its heavily invested in stat balancing, critical strike chances and accuracy percentages. The thief might be a flighty coward, but drop him into stealth then have him perform a backstab attack against an unaware target, and watch all the conditions stack towards a ridiculous damage modifier. The dwarf has a paunch attack that has the chance of knocking an enemy off their feet, which leaves them prone until they score a successful save roll. However, against enemies with decent physical resistance, this amounts to little more than a low damage belly bump. The turn-based battles waged might have been against inane opponents, like sleepy druids who worship the God of nap times, but those dopey bastards can mess you the hell up! 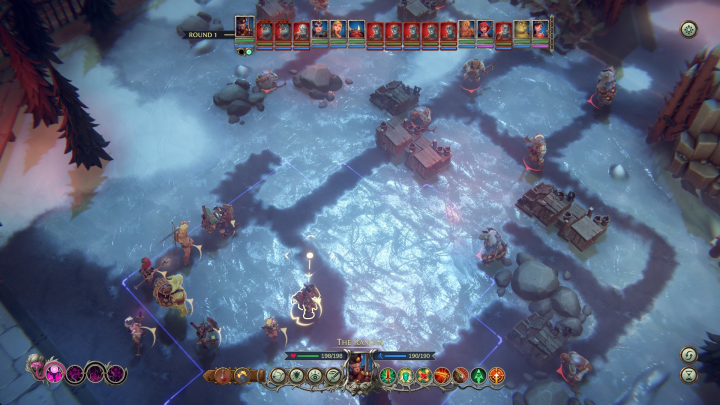 DLC #2, Splat Jaypaks Arena, doesnt want to forget all the prat-falling and name-calling; its just more interested in kicking your skull in. To that extent, your adventurer party is scaled all the way back to level 1, forced to make do with their awful beginner equipment and marched out to stumble through a number of battles. Fifteen of them, to be precise, all plucked from various chapters of the main game. Quite commonly, rather than just make you retread previous battles against known foes, it arms various NPCs you may have wronged and gives them the chance to elicit a little revenge. The first match is against two quarrelling chicken farmers. They dont offer a lot of offense, but can swell their ranks of rampaging chickens by destroying livestock cages that are littered around the arena.

Another laudable early battle pits you against an angry shopkeeper you accidently incapacitated before ransacking her store, backed up by her eventual replacement and a gaggle of guards obtained after being forced (by you!) to increase security. It could have been easy to just uproot battles from the game proper and paste them into the arena format, so the chance to murder something both new and familiar is appreciated. It also means you have to adopt new strategies to bypass these new foes rather than fall back on the same tried and tested tactics that got you through the main campaign. With this in mind, the most joy I found in Splat Jaypaks Arena was tearing up my pre-established playbook and using the level reset to make completely different builds for my team of bumbling mercenaries. You can even field party combinations previously impossible. Theres a point in the main crawl where you can recruit one final companion, and are given a field of three adventurers to choose from. Theres an inpatient paladin, a lisping bard and a stuck-up healer. Splat doesnt only let you amend your previous choice at will, but will let you sacrifice members of the original party to employ as many of the surplus characters as you please. 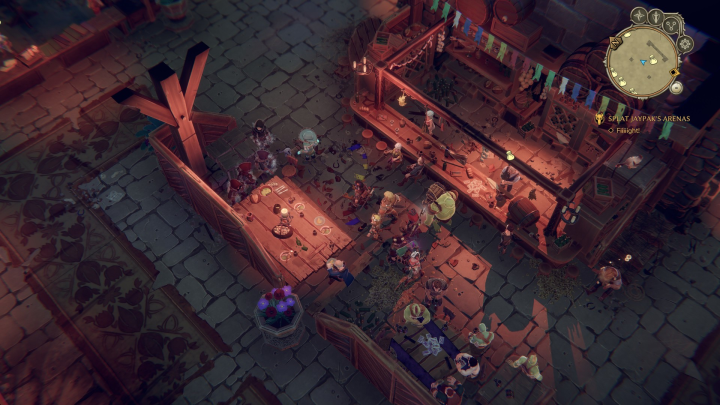 Theres a lot to be said for rebuilding your miniature army from the ground up. Without a dungeon to plunder, youre not going to claim new weapons and armour from random encounters, and instead have to purchase new stock with the finite amounts of gold you get from battling. Do you struggle as best you can with awful gear in an attempt to raise enough funds to jump as high into the equipment ranks as you can, or do you pick a gang of favourites and try to always keep them well armed and well protected? Do you try to keep everyone in mediocre gear so no one gets the really good stuff? Do you forsake bombs for your thief so you can stockpile more vital healing pots?

Splat Jaypaks Arena goes a little deeper than just giving you a bunch of recycled fights in a slightly different setting and calling It a day. Theres options there for a returning player to experiment, or to right choices they might have found didnt work out for them in the main campaign. While it doesnt make any attempt to advance anything, or add something new to the existing story, its an excuse for people who enjoyed their time with Naheulbeuk to wander back in and lob a few hen bombs at goblin mechriders or dark elf sadomasochists. Or pushy chicken farmers; its about time you could enact sticky revenge against the givers of fetch quests.

If you enjoyed this The Dungeon Of Naheulbeuk - Splat Jaypak's Arenas review, you're encouraged to discuss it with the author and with other members of the site's community. If you don't already have an HonestGamers account, you can sign up for one in a snap. Thank you for reading!

© 1998 - 2022 HonestGamers
None of the material contained within this site may be reproduced in any conceivable fashion without permission from the author(s) of said material. This site is not sponsored or endorsed by Nintendo, Sega, Sony, Microsoft, or any other such party. The Dungeon Of Naheulbeuk - Splat Jaypak's Arenas is a registered trademark of its copyright holder. This site makes no claim to The Dungeon Of Naheulbeuk - Splat Jaypak's Arenas, its characters, screenshots, artwork, music, or any intellectual property contained within. Opinions expressed on this site do not necessarily represent the opinion of site staff or sponsors. Staff and freelance reviews are typically written based on time spent with a retail review copy or review key for the game that is provided by its publisher.