When I was a freshman attending college and living in dorms, I had to get used to a lot of change after living rural for so long. Abstract concepts such as teen drinking and illicit drug use came crashing into my life like a klutz on roller skates. One night, as I lay awake at what felt like the very unreasonable hour of 2AM, I heard fragments of a boisterous party through the wall dividing my room from the next one. A lot of drinking and marijuana fueled that shindig, as usual. From what I could tell, so did a BB gun. Someone dared his chum to shoot himself in the leg, which he did. This act was naturally followed by bellows of manliness, because how could it not be?

Super Meat Boy, a tough-as-nails 2D platformer, reminds me of that moment from years past. Going through some of its generally short but challenging stages occasionally feels like putting a loaded BB gun against my leg and pulling the trigger. My bellows of triumph--mental only, for my neighbors' sake--are of course very manly and only slightly nerdy.

Though it has since become something of an indie legend, Super Meat Boy began as a fairly simple Newgrounds experience. It built an audience on that platform, which justified developing a Wii game that never happened and finally led to the polished package that arrived on Xbox Live Arcade and PC in 2010. I used to chat with creator Edmund McMillen on AIM back when a lot of that was still in the works, and he was a genuinely nice guy. When his game finally shipped, I didn't claim the review assignment for myself because I wanted to avoid any potential conflict of interest. Then other things came up, and I've only just now played it, some ten years later. Time flies when you're not shooting yourself in the leg with a BB gun. 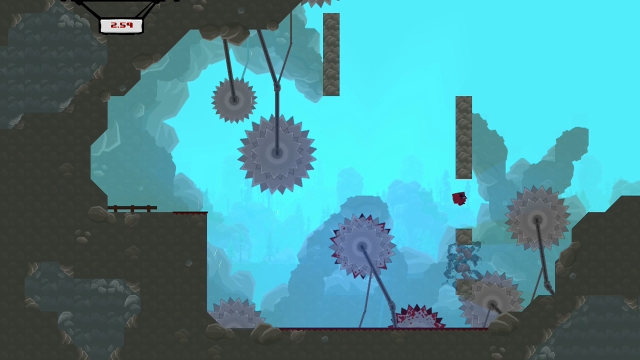 A quick rundown of the game's plot is that you are a sentient chunk of meat with arms, legs, and jumping prowess to spare. Your main squeeze, the beautiful Bandage Girl, has been kidnapped by your devious nemesis, Dr. Fetus. He leads you on a chase through increasingly grim and deadly environments, always managing to just barely foil your attempts to reunite with the girl you love as the world burns around you.

The story unfolds across dozens of stages, some small enough they fit on a single screen but most of them just slightly lengthier than that. Your goal is always to connect with Bandage Girl, who always is snatched away just before you can actually reunite. Cutscenes bookmark individual "chapters," which typically consist of 20 stages you can select from a map and clear in any order. To face the ultimate challenge in a given chapter, you must clear most of the stages within, but you can skip a few tough ones if you like. The potential issue, of course, is that nearly all of them are very tough indeed.

Meat Boy can't take damage without dying. He can fall almost any distance you might care to mention and survive the drop, provided he doesn't go outside of the level's boundaries in the process, but the slightest touch of razor blade or a homing missile or even a pile of salt is enough to end him. There are no checkpoints, which is only rarely an issue, and the timer automatically restarts whenever you die. You begin another attempt immediately, which is smart design. Any other approach would have broken the game, because of how often you die. Genius that I am, I've managed on multiple occasions to die within a second or so. 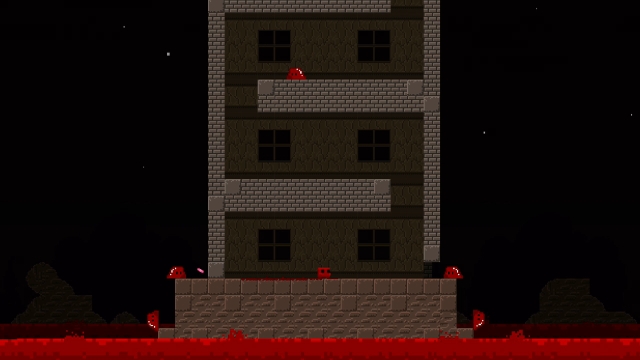 Most of the action involves a lot of running and tricky jumping. Meat Boy can jump to a wall and slowly start sliding down it, or he can spring away at an angle to cross a vertical shaft or reach a new platform or just avoid a hazard. This is where devious level design enters the equation. Often, you'll find that while Meat Boy is a joy to control and responds well in most circumstances, the world he occupies is just one big series of "gotcha!" moments. For instance, he might have to spring away from a wall to avoid a descending saw blade, but when he is most likely to meet that blade, springing away from the wall will send him directly into... another saw blade on the other side of the shaft. Or he'll just barely have missed ascending enough to reach a new platform and will plummet to his doom. Or he'll touch against that other wall, only to find that very specific single part of it is an illusion and he passes through it to a bed of... saw blades. There are a lot of saw blades here.

Later obstacles grow increasingly inventive. I don't want you to suppose for a second that Meat Boy faces nothing but saw blades. As an example, he sometimes must ride air gusts issuing forth from an over-sized fan. Or he'll run afoul of magnetic force fields that repel his approach. My least favorite distraction might be the floating heads that unerringly drift toward him while he tries to do something else, like navigate vanishing platforms you wouldn't find out of place in a classic Mega Man game. Some of the gauntlets the player must endure feel like a bit too much all at once, even if they don't last all that long.

If the standard stages are not sufficiently challenging for your own satisfaction, never fear; they are joined by "dark world" versions you access by finishing the "light world" equivalent with a really good time that may require several attempts even when you are otherwise successful. Those alternate runs include a lot more saw blades and other threats, and some of them seem almost to require actual perfection from the player. There also are hidden "warp zone" portals that take you to a series of three-stage challenges you must complete within as many attempts. As you should by now expect, they require absurd precision and very probably a lot of practice. 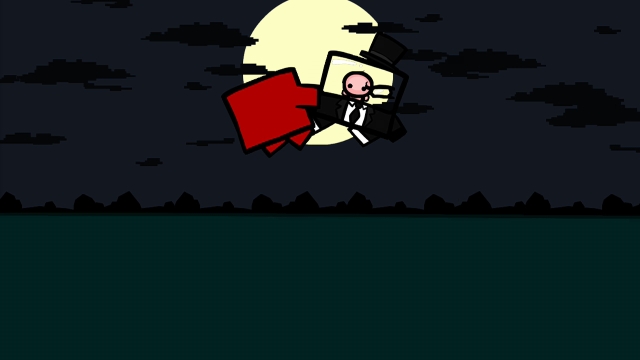 Boss encounters, which don't occur frequently, are not extremely inventive but certainly they are memorable. Generally, they ask you to survive a gauntlet while avoiding a rampaging opponent. In one such encounter, I had to race through a course with a bunch of tight passages and obstacles, to beat my rival to the end within a strict time limit. It must have taken me close to 50 tries, but I persevered. In another, a giant fellow slams granite fists on either side of a central platform, or sometimes just head butts it or causes chunks of lava to rain from above. Pattern memorization is essential to survive, and he mixes things up throughout each phase so that you're not really memorizing a pattern so much as the choreography of the entire extended battle.

Playing now, years after most of my peers have done so, I had an interesting advantage when it came to Super Meat Boy: I could see just when others gave up and decided to play something else. The game maintains leaderboards, and mine were populated by best times my friends--many of them former critics now known for their editorial chops--had secured. It was definitely interesting to start with a pile of rivals, then progress deep into the campaign and find myself going up against only a few meaty veterans with something to prove.

Super Meat Boy has a cute, quirky veneer that somehow compels me to play stages I don't even like that much just one more time. "Come on," it might as well say, "shoot your leg with the BB gun. It won't hurt very much!" During my main session, I spent a few hours without even realizing what I was doing, until suddenly I realized I was the masochist still awake at 2AM. Not a lot of platformers can still absorb my attention like that these days, so Team Meat deserves some belated congratulations and a glowing-ish recommendation. If death by saw blade is the sort of thing appeals to you (and you definitely must know by now if it does), give this game a shot and develop a new addiction. Just don't say I didn't warn you.
4/5

If you enjoyed this Super Meat Boy review, you're encouraged to discuss it with the author and with other members of the site's community. If you don't already have an HonestGamers account, you can sign up for one in a snap. Thank you for reading!

© 1998-2021 HonestGamers
None of the material contained within this site may be reproduced in any conceivable fashion without permission from the author(s) of said material. This site is not sponsored or endorsed by Nintendo, Sega, Sony, Microsoft, or any other such party. Super Meat Boy is a registered trademark of its copyright holder. This site makes no claim to Super Meat Boy, its characters, screenshots, artwork, music, or any intellectual property contained within. Opinions expressed on this site do not necessarily represent the opinion of site staff or sponsors. Staff and freelance reviews are typically written based on time spent with a retail review copy or review key for the game that is provided by its publisher.