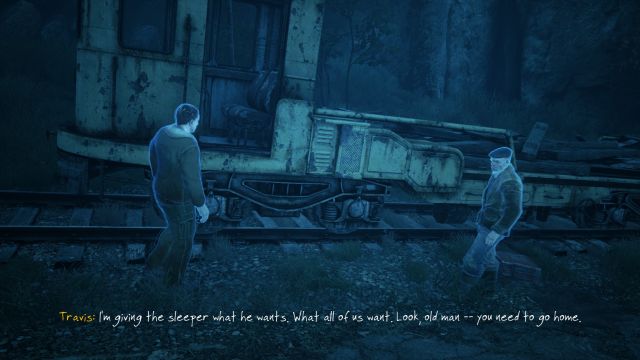 I am no fan of Dear Esther, but I have come to appreciate its legacy. Its sub-genre has evolved generously over the years, moving beyond Esther's slow, tedious trudge and barrage of vague symbolism. Though that game initially put me off on "walking simulators" and first-person adventure titles, I've found a few over the years I quite enjoy. To wit, The Vanishing of Ethan Carter, a first-person narrative piece with a splash of mystery and horror elements. I know, someone is going to comment that it's not technically a walking simulator, since it has some interactive elements. Let's face it, though: it's cut from the same cloth as The Chinese Room's divisive hit.

Hell, it even starts out pretty similarly to Esther, with a man walking through a gorgeous landscape while muttering strange things to no one in particular. This time, though, you don't assume the role of an old man prattling on and on about an accident, but a psychic investigator called to a forested valley to locate the titular missing child, Ethan. You accomplish this by scouring the vicinity for various items, people or triggered events that prompt your supernatural powers into action. Early on, you enter a wooded area full of sadistic traps, including clamping jaws and spiked boards that spring up out of the ground. Using your talents on these items, you eventually uncover a side story that gives you extra insight into what befell young Mr. Carter.

You bump into a few of these weird, fantastical subplots throughout the campaign, where you tail a fleeing astronaut or make your way through a ruined house full of portals, eventually arriving at an occultist's grisly den. I won't spoil anything, but there's a reason these little diversions from the main plot exist. Though they aren't part of the official storyline, they're no less important to the tale itself and are definitely not mere filler. Or at least not useless, pointless filler... 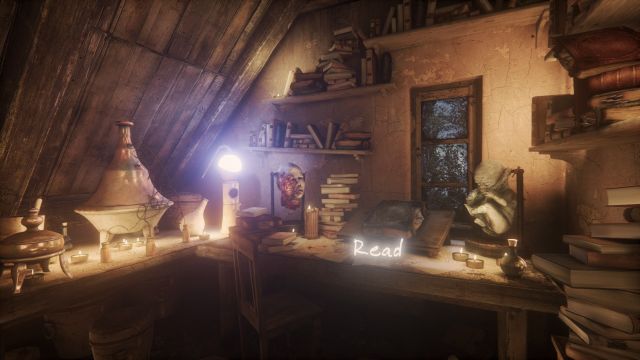 The main story takes center stage when you cross a bridge early on and spot a massive bloodstain and two severed legs on some train tracks. Crimson streaks eventually lead you to a legless corpse, and a prompt for your powers. However, you can't see anything related to the incident because the investigator needs to reassemble the murder scene exactly as it was before it occurred. From here, you search the area for any event items or clues that might tell you what happened to the fallen John Doe, and here's where you run into your first patch of trouble. Most items and relevant places to check possess obvious markers that catch your attention. Some of them, though, only give you a tiny box with writing that blends in with the environment. As a result, some objectives are too easy to overlook, and locating them becomes a matter of finding a needle in a haystack even with the added assistance.

The first of these goods that gave me trouble was a crankshaft needed to solve the first murder (yes, first as in "here there be multiple murders"), which turned out to be next to a riverbank. However, amid the large rocks and calm water, that item and its marker were not clearly discernible from their surroundings, causing me to walk past it several times before accidentally spying it from the edge of a cliff.

With everything in place, you can then use your vision on the dead man and glimpses of what occurred sprout up in the area. At this point, you need to decide the order of events to unlock the man's gory, unnerving death scene. Thankfully, segments like this are none too stringent, and you can easily solve them via process of elimination. It also helps that proper guesses become "locked in," provided you get them in sequential order. For instance, if you guess the first part correctly, it'll be permanently confirmed and you'll never have to fuss with it again. After that, you need to guess the second portion properly to lock it in, and so on. 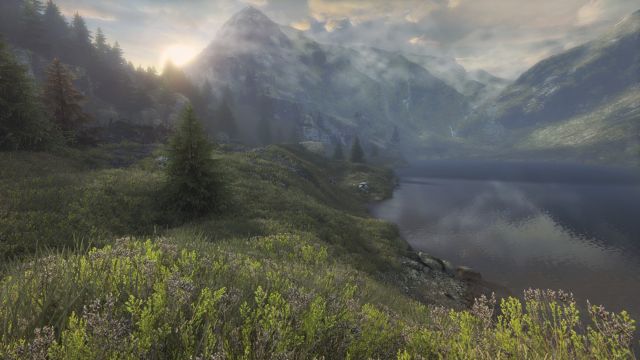 And that's how the story plays out. Each plot beat is a trip from one murder scene to the next, unraveling how different characters perished. Each death brings you closer to Ethan and to discovering what demonic powers are at work here. They also represent a terrific diversion from the constant moseying and glancing at obvious metaphors seen in other first-person adventures. Granted, the game's cutscenes and deaths play out like mid-'90s straight-to-video horror fare, complete with instances of awkward dialogue. However, that doesn't diminish the central story's level of intrigue.

During my own playthrough, I found myself scouring odd places, hoping to find some side event or hidden clue. Even if I didn't, I enjoyed exploring and simply taking in the sights. Even with the downbeat atmosphere brought on by the overcast, the dense forests and calming lake and streams created the impression that I was venturing through a landscape painting. I didn't only want to advance the story, but actually experience the world. This is a good sign, because lesser entries in this genre usually leave me wanting to get through their campaigns as quickly as possible so I can move onto less yawn-inducing products.

About half or more people will probably call part of the ending from a mile away, but not all of it. There's one significant development you probably won't account for, and it'll leave you depressed for some time after the final credits roll. The game does a great job of letting its veil slip just enough for you to properly call its twist, but it still hits you hard with a conclusion you probably didn't see coming, and in some ways wish wouldn't have come. 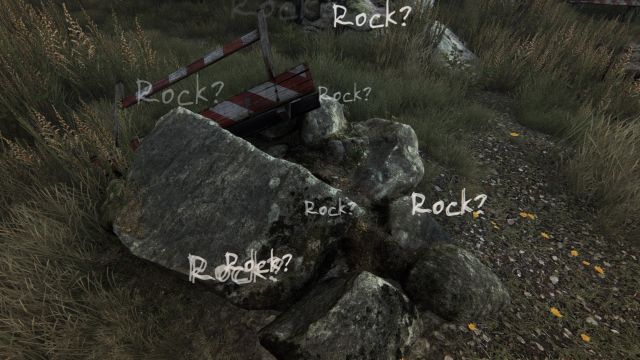 A good "walking simulator" should distract you from the fact that you're merely stepping from one cutscene or symbol to another. You should never think, "Ugh, this is all just a bunch of tedious wandering" or something to that effect. Ethan Carter tells you it's a supernatural mystery-thriller, and gives you plenty of detective-y mechanics. On top of that, its side segments add variety to the proceedings, and make sense in-game. Effective games like this don't merely make walking from Point A to B more entertaining. They make you forget that you're walking at all.

If you enjoyed this The Vanishing of Ethan Carter review, you're encouraged to discuss it with the author and with other members of the site's community. If you don't already have an HonestGamers account, you can sign up for one in a snap. Thank you for reading!

© 1998-2021 HonestGamers
None of the material contained within this site may be reproduced in any conceivable fashion without permission from the author(s) of said material. This site is not sponsored or endorsed by Nintendo, Sega, Sony, Microsoft, or any other such party. The Vanishing of Ethan Carter is a registered trademark of its copyright holder. This site makes no claim to The Vanishing of Ethan Carter, its characters, screenshots, artwork, music, or any intellectual property contained within. Opinions expressed on this site do not necessarily represent the opinion of site staff or sponsors. Staff and freelance reviews are typically written based on time spent with a retail review copy or review key for the game that is provided by its publisher.