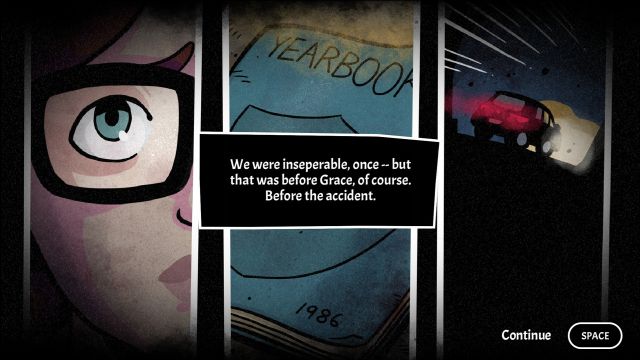 I remember staring at the thumbnail for Worse Than Death in my Switch library, thinking, "There's no way in hell this'll be a capable horror game." The tiny square showed a panicked girl looking over her shoulder, apparently running from something. Honestly, it's not a half-bad picture in and of itself, but it's so cartoony that it's difficult to imagine the game being anything but a web comic-style adventure game with light horror elements.

And yet it managed to surprise me, even if just a little...

The game wastes no time introducing its main characters, Holly and Flynn. Both of them travel back to their hometown for a class reunion, and neither of them want to be a part of it. They were best friends in high school, but drifted apart when tragedy struck them. The opening segment does a fine job making these two relatable, showing us their anxieties and hangups. Before long, you forget about the odd thumbnail and begin to invest in the duo, hoping they get through that worrisome reunion and maybe find some measure of peace.

But remember, this is a horror title. Nothing ever goes right with tales like these, and this one goes awfully wrong in a hurry. Eventually, Holly and Flynn separate and break away from the festivities. Holly investigates a classroom at her old high school while looking for her buddy, only to find one of her classmates mutilated by some unknown assailant. After leaving that grisly scene, she soon comes face-to-face with the culprit: a semi-invisible specter whose very presence chills the air around it. 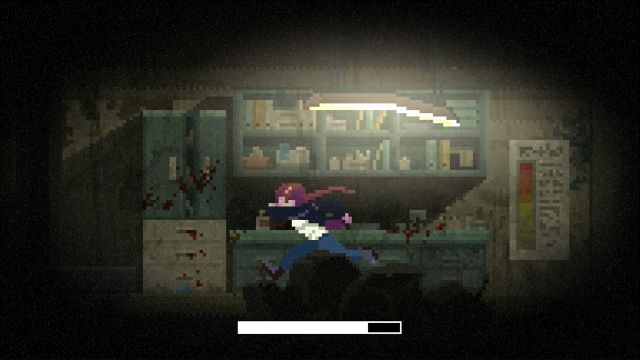 The being wanders back and forth, groaning in an awful, raspy voice: WHERE ARE YOU? It's unnerving to listen to for any length of time, and hearing it from a distance when you enter any hallway sends shivers down your spine. However, you can easily avoid the thing by slinking into lockers, ducking under tables or slipping into alcoves, but such avoidance doesn't erase the fear it strikes into you. Any time the thing approaches, the screen turns red, the controller vibrates and distortion turns way the hell up. Sometimes it'll linger there next to you, almost as if it knows you're nearby and is just waiting for you to get impatient so it can splatter you all over the place as well.

Eventually, you'll have to leave the safety of your hiding place and venture forth. Early on, all you need to do is wait for the entity to walk by and you're golden. However, almost every situation after the about the second level requires you to leave while the creature is still pretty close to you. Your knee-jerk reaction might tell you to run, but such a decision is foolhardy. The phantom will hear you footfalls and chase you all over the damn place until you're able to hop behind a barrier of some kind, hoping the thing didn't see you duck for cover.

Honestly, segments involving the whatever-the-hell-it-is aren't all that difficult. In some ways that robs it of its scare factor, but not enough to render the foe completely ineffective. Regardless, it remains a pretty frightening antagonist, partly because of the gruesome manner in which it mangles its victims, and party because it's such a mysterious adversary and you have no idea how you're going to deal with it. 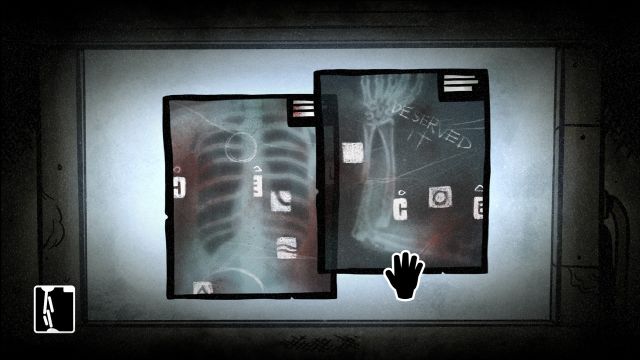 Unsurprisingly, the bulk of the campaign consists of narrative and puzzles. Almost every level offers some simple challenge to overcome, such as learning a password or locating keys. You'll have to scour every room for clues or event items that lead you to other clues or event items, eventually discovering more information and finding an exit. You see, something terrible happened to Flynn a few years back, and it's related to what's going on. You'll find out about another girl named Grace, and how she ties in to all of this, not to mention her father and some of the secrets the two of them share.

Hell, you'll find that the whole town has some skeletons in its backwater closet, from a teacher having an affair with one of his students to a clandestine drug ring.

Worse drip feeds you this information, tossing you the occasional scrawled note when you locate a dead character's purse or snatching an X-ray from the hand of a deceased doctor. Sometimes, you only find these little snippets after you've uncovered a password and successfully opened a safe, or solved a logic puzzle that kept a couple of doors locked. I know that these little tidbits and revelations don't sound like much, but the storyline keeps you guessing just enough that you'll want to press on and uncover the truth.

I know, none of this sounds organic. Who leaves vague clues to an overarching story locked away in seemingly random places? Who rigs their daughter's bedroom door up to an alarm clock such that it only unlocks when the device reads a certain time? Oh, and conveniently her nightstand holds an event item and a tiny chunk of the plot. I could rag on this game's narrative style for ages, but it would be awfully hypocritical of me to praise a title like Silent Hill while dragging this one for its storytelling. 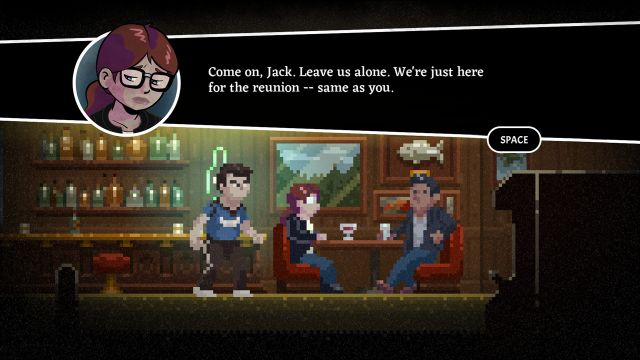 Remember, this is a video game; part of a medium that's a completely different beast from more traditional forms of fiction. It's not irregular for games to feature contrived, illogical challenges and riddles that lead to meager helpings of a plot, handing us pieces that eventually come together as a complete puzzle. While this structure might seem silly in comparison to other mediums, it works out wonderfully for this title. The puzzles on offer aren't so hard that you'll want to quit, but they're tricky enough that you actually feel engaged while completing them. On top of that, the story may not be "god tier" material, but it's entertaining and intriguing enough to pass the time.

And really, what more could you ask for out of a horror adventure? Worse Than Death scratches that genre itch effectively, providing plenty of creepy moments, likable characters and decent puzzles. It's no classic, but it's certainly better than the cartoony horror wanna-be I initially imagined it to be...

If you enjoyed this Worse Than Death review, you're encouraged to discuss it with the author and with other members of the site's community. If you don't already have an HonestGamers account, you can sign up for one in a snap. Thank you for reading!

© 1998-2021 HonestGamers
None of the material contained within this site may be reproduced in any conceivable fashion without permission from the author(s) of said material. This site is not sponsored or endorsed by Nintendo, Sega, Sony, Microsoft, or any other such party. Worse Than Death is a registered trademark of its copyright holder. This site makes no claim to Worse Than Death, its characters, screenshots, artwork, music, or any intellectual property contained within. Opinions expressed on this site do not necessarily represent the opinion of site staff or sponsors. Staff and freelance reviews are typically written based on time spent with a retail review copy or review key for the game that is provided by its publisher.