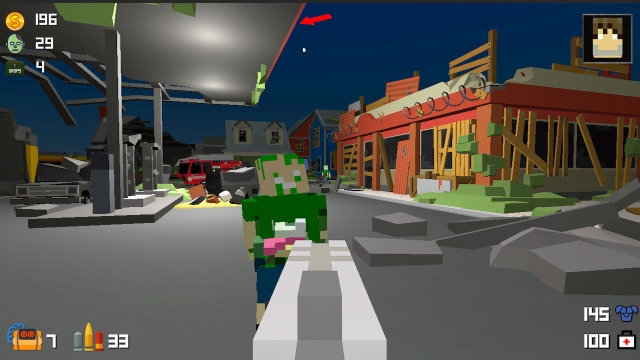 I can't stress this warning enough: if you're planning to pick up the Switch shooter ZOMB, especially at its base price of $9.99, DON'T.

You might look at that price tag and think you're paying for a full length title with a decent campaign and at least stable mechanics. You might also imagine several levels or scenarios, a small bestiary of maybe five or six different foes and the usual suspects in regards to weaponry on offer. Such is not the case, though, regardless of what the game's summary tells you. Nintendo's store page implies this product is a frenetic shooter not unlike Doom. Not only does the blurb on Nintendo.com claim it's inspired by '90s action games, but the freakin' promotional art is an homage to id Software's classic. Make no mistake, though; this clunky mess provides nowhere near the level of speedy action or clever stage design seen in that classic.

If you're like me, you'll ignore the nagging sensation that something's amiss and watch your hard earned cash disappear into the digital void. After a brief download, you fire up the app and the game cuts right to the chase without any sort of introductory cutscene or in-game message detailing your objective. You parachute into a wrecked city, complete with smashed buildings, a crumbled overpass and abandoned vehicles. A red arrow at the top of the screen points you in the direction of an apparent mission marker, but doesn't tell you much more than "go that way." So you follow it, gun drawn, ready to re-kill the undead with finesse. 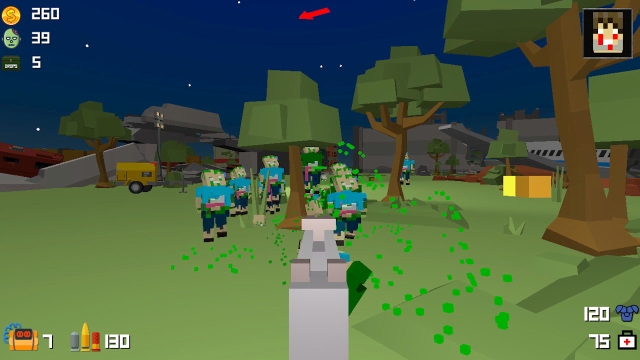 Yeah, you read that correctly: "turn." As in "to rotate your body either clockwise or counter-clockwise." As in "you perform a basic action not even one second into the proceedings, and already the wheels are coming off the bus." You notice as you try to round a corner that your character turns slowly, as if he's running on his knees. Meanwhile, blocky zombies amble forward more quickly than you can face them. This is obviously problematic because the game isn't contained within a single, straight hallway. You're in the middle of a town, where there are corners and non-straight architecture everywhere. So much for fast-paced action...

But you can't give up now because you invested money in this excursion. So you try to plug as many bullets into the surrounding ghouls as you can, noticing that you can only move the reticle horizontally. In order to land a headshot on a zombie, which is just about necessary for eliminating it without wasting your much needed ammo, you must mosey toward it and constantly reposition yourself until your crosshairs line up with its noggin. To echo what I said a minute ago: So much for fast-paced action... 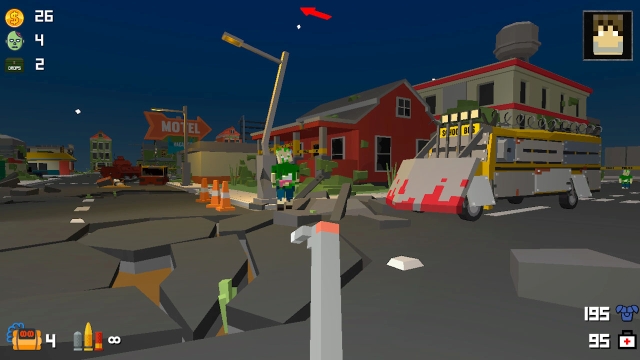 So you follow the arrow on your HUD, hoping it takes you to something that breaks the mounting tedium. However, you can already feel your eyelids growing heavier, and you're not sure you're going to make it to the beacon. Somehow, despite your surroundings, the experience feels empty. Part of the blame rests with the lack of music, which absolutely sucks the last ounces of joy out of the affair. On top of that, you battle foes that look and act exactly alike, offering no variety to the madness. More than anything, this game comes off as a proof-of-concept or a demo that was abandoned before it could be fleshed out, but got released as a full product anyway.

Finally, after a few minutes of slow, basic shooting and stilted, groan-worthy mechanics, you reach your destination. It turns out the arrow was leading you to a supply drop, packed with ammo, a medkit and a new weapon (e.g. revolver, shotgun, rifle, etc.). Eventually, the arrow resets and you follow it again. It takes you to another supply drop. Then another. Then another. After a few of these, you realize the arrow isn't trying to help you complete the stage at all, and you're going to have to guess your way through this one.

You decide to explore the destroyed city after that, but your search turns up nothing. It occurs to you just then: there are no objectives. You dropped here to blast vanilla walkers until you die, not complete a mission or play out a storyline. ZOMB, as it turns out, is nothing but a score-attack title with crummy mechanics, where all you do is wander around and shoot rudimentary targets. 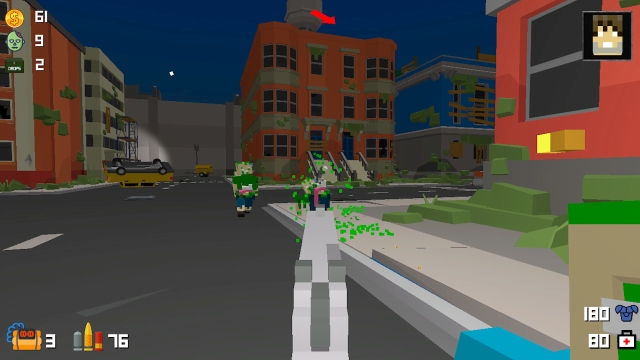 FOR $10!!! There are freeware games available that feature more depth or actual campaigns with endings.

There's no reason whatsoever to consider playing ZOMB. Even if all you're looking for is a simple zombie-killing experience, you're going to be horribly disappointed with this one. Besides, games like Dead Nation and Zombie Shooter already scratch that itch, plus they offer multiple levels and much smoother mechanics.

I get that this game tried to be minimalist, but there's more to minimalism in gaming than selling an app where you do one thing repeatedly. Not only does pacing matter , but a minimalist game should have at least one thing that brings players back again and again. ZOMB flat out doesn't have anything like that. Hell, it barely has anything at all: no campaign, no levels, no music, no vertical aiming, no originality, no creativity and most certainly no entertainment value whatsoever.

If you enjoyed this ZOMB review, you're encouraged to discuss it with the author and with other members of the site's community. If you don't already have an HonestGamers account, you can sign up for one in a snap. Thank you for reading!

© 1998-2021 HonestGamers
None of the material contained within this site may be reproduced in any conceivable fashion without permission from the author(s) of said material. This site is not sponsored or endorsed by Nintendo, Sega, Sony, Microsoft, or any other such party. ZOMB is a registered trademark of its copyright holder. This site makes no claim to ZOMB, its characters, screenshots, artwork, music, or any intellectual property contained within. Opinions expressed on this site do not necessarily represent the opinion of site staff or sponsors. Staff and freelance reviews are typically written based on time spent with a retail review copy or review key for the game that is provided by its publisher.