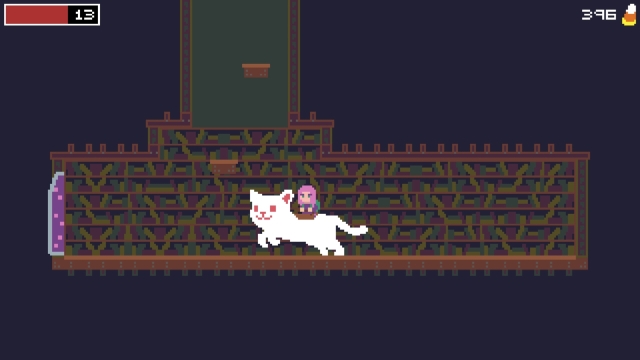 Spooky Ghosts Dot Com is yet another faux-retro game that copies Metroid, but this one includes more of a Ghostbusters vibe. Instead of zapping aliens on a far off world, you play a pink-haired heroine named Violet who blasts her way through a haunted house and takes out a decent array of specters. Oh, and she meets and pets several cats during her quest. That's important. Think of it as a Samus Aran Halloween Special, sponsored to you by Meow Mix.

Unfortunately, this title brings nothing new to the table, with the exception of feline petting mechanics. It offers no innovations, doesn't expand upon the genre's core concepts and runs a familiar route. You enter a room that has multiple passageways, you explore each branch and eventually come to an impasse or two. Your only way around it lies with either a new ability or an item (usually a key), which you find somewhere else in the depths of the manor. Some pathways also hold other goodies, such as hidden shops, permanent life extenders or the aforementioned cats for cuddling, which allow you to fast travel throughout the premises when you've befriended enough of them.

While none of these features count as flaws, they all comprise the bare minimum of content expected in a "Metroidvania" game. Yet, despite its merely average features in a crowded genre, Spooky manages to provide a simple, delightful experience. 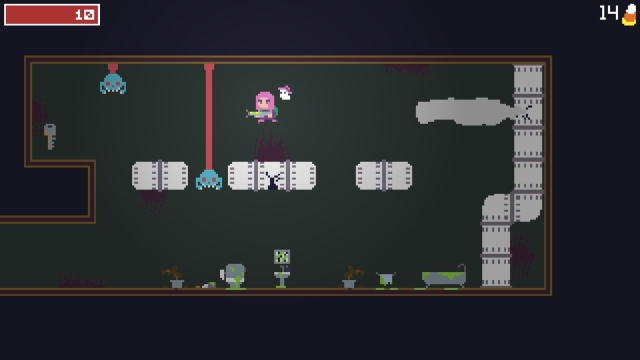 The game partly accomplishes this through its art style and atmosphere. Its visuals wax nostalgic, for sure, but they're equal parts cute, charming and old school. They don't come off as retro visuals merely for throwback's sake. Rather than tossing you into a grimdark world, you battle through a haunted mansion that sports just the right touch of colors, as if to offset its dankness and darkness. For instance, you explore a creepy basement at one point, but the occasional pastel colors and bright reds and shades of blue help soften the atmosphere. The same goes for the enemies you face, including dainty rotting corpses and bungeeing skulls attached to bright-colored cords of flesh. You can't help but think of the old cartoon specials that network TV channels used to run during Halloween, like "Witch's Night Out" or "Which Witch is Which?"

You can tell developer Grizzly Wizard put some thought into this adventure, too. You glimpse a lot of little touches that add flare to the environment and characters. Ghosts haunting the dining room, for instance, show off silly details that complete the dinner party theme. Some of them waddle at you with robust guts, silverware in hand and little red bibs somehow attached to their non-corporeal bodies. Bosses especially show off creativity, including an undead groundskeeper who literally throws you a bone, a punk rock phantasm who barfs a red mist and an enormous, gluttonous spirit who swallows you whole. You spend part of that encounter in his gut, trying not to get digested. The latter half of it sees you knocking out his teeth from inside his mouth. Meanwhile, ghostly dentists threaten to repair his damaged enamel and negate your progress.

As expected, traps inhabit most of the real estate you explore. After all, this is a platformer, and what's a modern indie platformer without the occasional obstacle course? Thankfully, this one doesn't try to go full Meat Boy, and also offers not only a little breathing room, but a variety of perils between breaths. Spikes and rotating saw blades make their obligatory appearances, but don't hog the spotlight. That leaves more room for thematic traps, like indestructible tomes that float back and forth in the library. You not only need to time your jumps when dealing with those, but also mind where you land. Other areas provide their own unique dangers as well, including crow wizards that summon flames in the garden, shield-bearing skeletons and steam-gushing pipes in the house's center. 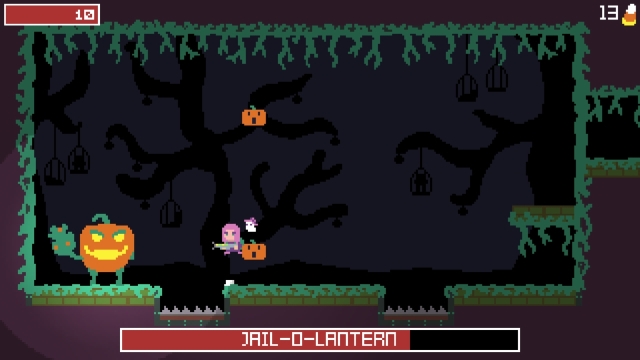 By now you're probably imagining a standard four to six hour campaign full of recycled (albeit charming and fairly entertaining) content. However, the secret to this game's success lies in its brevity. The campaign only lasts about two hours, and subsequent replays should take even less time. Bear in mind that while the mansion does provide a decent network of twisting halls and rooms waiting to be explored, it isn't such a convoluted mess that you'll be stranded there for ages. Spooky knows when its about to overstay its welcome, and uses that opportunity to wrap up its proceedings with a tough final boss.

Even when you've bested the antagonist, the game wastes little time. You watch a short ending and a credit roll, and you're right back to the title screen. If you're like me, you'll probably start the whole affair over again, because why the hell not? Unlike some other short games, this one hits all the right notes in short order and still leaves you satisfied. You don't have to worry about donating a whole week of your free time to this beast; just a couple of sessions at most is all it's asking of you. After that, you can move on to the more in-depth stuff in your backlog.

At this point, I wish more indie throwback games would adhere to this concept. I get that developers want to pay homage to the games they loved, but most retro concepts have already been explored. These games tend to lose steam after a few hours nowadays, mostly because we've seen it all before--in at least two different gaming eras, no less. A new release doesn't need to offer fresh or seldom-seen material, though, provided that it does its genre justice efficiently. And Spooky Ghosts accomplishes that mission.

If you enjoyed this Spooky Ghosts Dot Com review, you're encouraged to discuss it with the author and with other members of the site's community. If you don't already have an HonestGamers account, you can sign up for one in a snap. Thank you for reading!

© 1998-2021 HonestGamers
None of the material contained within this site may be reproduced in any conceivable fashion without permission from the author(s) of said material. This site is not sponsored or endorsed by Nintendo, Sega, Sony, Microsoft, or any other such party. Spooky Ghosts Dot Com is a registered trademark of its copyright holder. This site makes no claim to Spooky Ghosts Dot Com, its characters, screenshots, artwork, music, or any intellectual property contained within. Opinions expressed on this site do not necessarily represent the opinion of site staff or sponsors. Staff and freelance reviews are typically written based on time spent with a retail review copy or review key for the game that is provided by its publisher.