Few things work as well for horror as crushing isolation and, with the distinguished exception of outer space, perhaps nothing embodies that more than the icy wastelands of the Arctic. Housing such horror heavyweights as John Carpenters The Thing and H.P. Lovecrafts At the Mountains of Madness the snow-covered wastelands are hundreds of miles away from even the bleakest signs of established civilisation. If something goes wrong, help is days away from arriving, rescuers forced to battle massive distances and hostile weather conditions. If something goes wrong, youre on your own, surrounded by sub-zero conditions with nowhere to run.

Alpha Polaris chooses to house its tale there, centred on a Greenland-based oil prospecting station. In what can only be recognised as a cheap PR stunt designed to curry favour with environmentalist groups, its also the temporary home of Rune Knudson, a Norwegian biologist studying the migration habits of polar bears. Life for Rune isnt particularly thrilling; every now and then, hell tranquilise a bear and fit it with a tracking collar, but those instances are few and far between. For the most part, hes stuck rewatching the same DVDs, abusing the dwindling supply of alcohol or hanging out with the same three people. 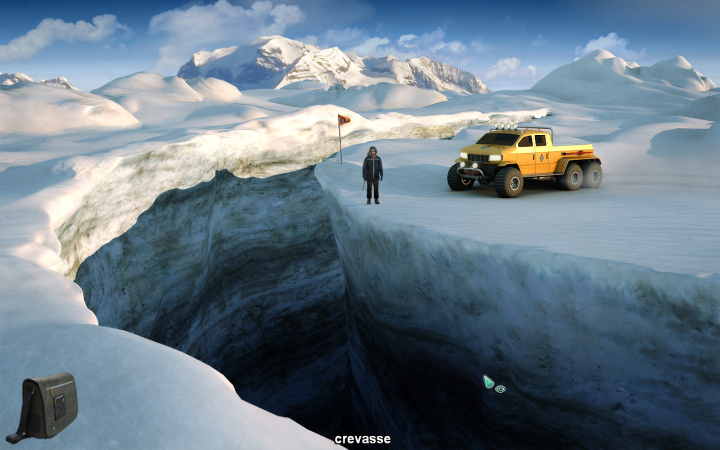 And so the days drag on. Site mechanic, Tully, is a bit of an impulsive arsehole, but the stations lead, Al, is easy to be around  so long as you dont steal his sandwiches. Runes nurturing a little crush on science officer Nova, and might even be making some headway either through his winning personality, his stockpile of absinthe or crushing cabin fever. For want of something to do, hell take what he can get. What he gets early one morning (too early for someone nursing a hangover, perhaps) is rudely awakened with the news that a polar bear is snooping around the bases border. Alpha flexes it point & click chops at this point; you cant just wander outside directly from the comfort of your bed; the thermometer in your room shows momentary reprieves from boredom and pyjamas alone are not suitable for the arctic conditions. Theres busywork to be done, equipment to track down, tools to obtain.

Alpha Polaris does really well in establishing the repetitive drone of working the station without putting the player through it directly. Its established in context, in Runes comments about the collection of well-thumbed books, or the state of the camps rations or Tullys excitement in something actually happening. Once you figure out how to get outside, you have to figure out how to neutralize the bear which leads to unforeseen complications of a reasonably mundane nature. Suddenly, you have to find a way to move a massive slab of unconscious carnivorous bear that no amount of inventory fandangling is going to help you solve. Instead, the game brings up a text box and asks you to type in a solution. In this case, its pretty lenient; a quick wander about the camp will give you an obvious resolution and you should pass this particular adventuring oddity without difficulty. The next three times the game makes use of this interface are considerably less forgiving. Theres a reason this is a rarely used method; it doesnt really work.

As the tale progresses, its Lovecraftian influences become more clear. The tundra setting ensures that At the Mountains of Madness is the obvious comparison, but it shares more with one of H,P.s earlier tales, Polaris. Sure, theres a big clue in the games title, but both use unusually vibrant auroras to foreshadow disaster, and both successfully attack their cast through the use of disturbingly vivid dreams. Though youre only privy to the visions seen by Rune, the rest of the cast become more and more unhinged every night they suffer through. Tully rants about the arrival of something monstrous and hungry while Nova complains of voices demanding atrocities in their name. Al sits up until the early hours, staring at the aurora from the stations observation point. 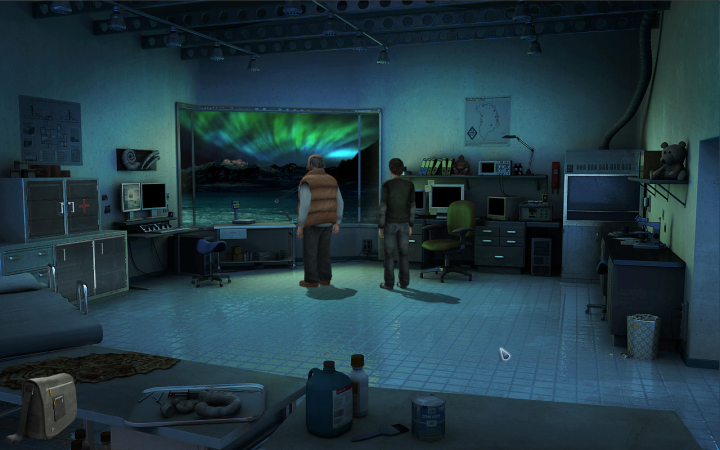 Building to calamity is Alpha Polaris greatest strength. Each night further erodes at the stations crew as Rune digs away at the mystery behind it all, first out of academic curiosity and, eventually out of desperate survivalism. Dodgy textual interface issues aside, the games biggest failings are when the investigations are concluded. No longer wrapped in macabre mystery, draped in ethereal suggestion and hidden in half remembered dreams, Alphas eventual reveal of its homicidal antagonist is lacking.

Theres this pretty common occurrence in horror films; the good ones understand that the build up to a reveal is often the most important part of the tale. So it will tease you with little flashes of the big evil, a horrifying murder performed just off screen, or a glimpse of something inhuman briefly teased but not focused on. Then the big reveal happens to signify the start of the films finale, and it turns out its just some guy in a bad monkey suit with a few extra arms gaffer taped on. Alpha Polaris can relate; prepare to be underwhelmed.

Its a real shame that such a carefully conducted build is dampened by an underwhelming and frantically rushed conclusion that desperately ticks off the casts myriad conclusions with such a sense of reckless abandon, their grisly fates rarely have time to register. No time is offered for grief or shock or fear to cultivate as the game stampedes towards the finale. This doesnt stop Alpha Polaris from being a good game built atop a good horror story, but with more time to breathe, it could have had a final third worthy of its stellar introduction. I couldnt tell you why the game doesnt fully commit to finishing off its arctic horror tale in suitable fashion  perhaps it got cold feet.

If you enjoyed this Alpha Polaris review, you're encouraged to discuss it with the author and with other members of the site's community. If you don't already have an HonestGamers account, you can sign up for one in a snap. Thank you for reading!

© 1998-2021 HonestGamers
None of the material contained within this site may be reproduced in any conceivable fashion without permission from the author(s) of said material. This site is not sponsored or endorsed by Nintendo, Sega, Sony, Microsoft, or any other such party. Alpha Polaris is a registered trademark of its copyright holder. This site makes no claim to Alpha Polaris, its characters, screenshots, artwork, music, or any intellectual property contained within. Opinions expressed on this site do not necessarily represent the opinion of site staff or sponsors. Staff and freelance reviews are typically written based on time spent with a retail review copy or review key for the game that is provided by its publisher.