This is going to be one of those reviews, Im afraid. One of those ones where I hint at grandeur but pull back from the definitive while using fear of spoilers like a get out of jail free card. Thats just the nature of SOMA, I fear; if I start trying to explain more or less anything, then Im going to have to reveal a little bit more to shed some context. And, at that point, I might as well spill it all and tell you that the butler did it.

Of course, in this instance, the butler is entirely innocent. It was probably one of those homicidal robots in this case. If not them, then certainly one of those lumbering monsters that lurk around the place. One thing I cant  and wont  hide is that SOMA is plainly the work of Frictional, the warped minds behind Amnesia: The Dark Descent. Not Amnesia: A Machine for Pigs, I hasten to add: that was slapped together by Dear Esther developers, The Chinese Room. No, no, no  were talking about the good one, the Amnesia that made hiding in cupboards from evils you couldnt even see the new face of fear. SOMA shares a lot in common, but also boasts a lot of differences.

We should talk about the sea. SOMA takes place in an underwater environment, effortlessly promoting a sense of isolation and disconnect. Strolling past windows displaying endless stretches of sea hammer home the fact that youre on your own with whats left within the stations, which rarely has your back. Theres nowhere to run, no incoming help to look towards. On the other hand, at times, the aquatic surroundings are purposefully lovely and almost soothing. Theres stretches where youre not assaulted by the horrific and the insane where a stroll around SOMA is nearly inviting. Its a trap; of course it is. 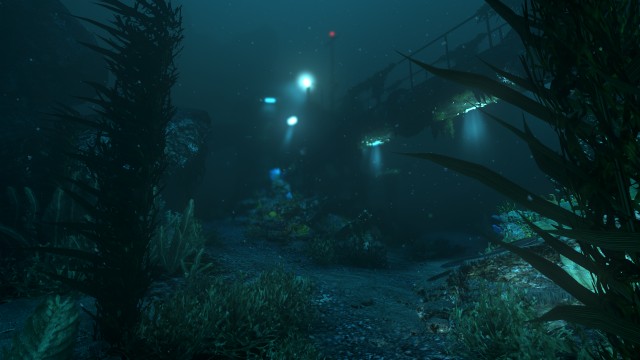 Protagonist Simon doesnt have a lot going for him. Clueless, but without travelling the tired amnesiac road and broken in ways hell begrudgingly come to understand. Defenceless for the most part; much like in Amnesia and Penumbra, his vulnerability acts as a strong catalyst for you to invest in fear and panic. There are not a lot of places to hide and miles of seabed arent often conducive with escape, so instead, hes forced to tiptoe through the horror knowing the near inevitability of a messy death is just a blind corner away. His companion of sorts, Catherine, provides some of the most believable dialogue ever delivered between two characters trapped in a nightmarish dervish, but is still hardly a comfort. There are moments between the two that can lighten the mood; shades of morality and philosophy and the welcome mundane grind of everyday life. These are also traps. Of course they are, and of course you already know this. But youll wilfully fall for them regardless just to try and suck at the pinpricks of light among the dark.

SOMA succeeds at being scary. Not jump-scare scary (though it holds no quarrel about throwing those at you when you least expect it) but manages to be one of those rare horror titles that seeps into your brain and genuinely disturbs you. While you could argue (and I will; its what I do) that it doesnt creep you out to the same chilling highs that Amnesia does, it nails a lot of the aspects that game fell short of. Production values have been ramped up to ensure your underwater home is suitably damp and unwelcoming, while the awkward puzzles are certainly less awkward. Some of them even make sense beyond the usual Find X to open door, but SOMA retains the feel of a horrific adventure game that demands you understand your surroundings to advance. And not get eaten. Thats important, too. 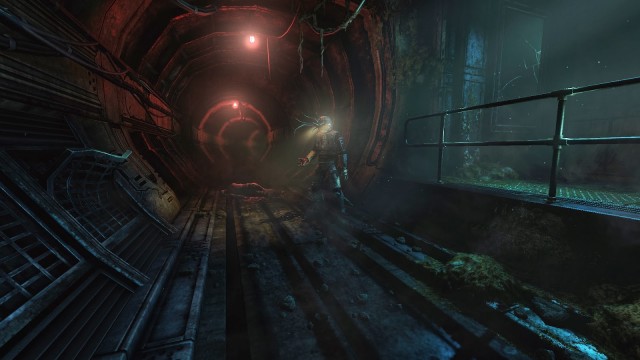 Its amazing, then, that SOMA is still able to pull so effectively at your heartstrings. Some quests require you to find parts that are readily available from nearby machines, but while you harvest these items, you have to listen to the robot youre deconstructing. They might drip innocence, highlighting the heavy moral greys in which you walk as you effectively murder them, or they might just plead for their lives. It creates a new feeling of discomfort that sits awkwardly with the more macabre offerings you would more expect from Frictional. Sometimes you dont have a choice, but what happens when you do? In a lot of laudable ways, SOMA trades in trying to convince you theres something in the shadows that wants to kill you and instead forces you to ask questions you might not be comfortable asking. It forces you evaluate how much stock you put into humanity, or, ultimately, how you truly define what it is. Its such a broad and integral question that no two peoples answers are ever likely to be exactly the same, meaning theres no real way for two different people to experience SOMAs unfolding in the same way.

It will turn things around on you; twist your stomach up in ways you didnt expect. Theres a real sense of inquisitive morality running roughshod through the entire undertaking, asking not only how you might fare in the face of unspeakable horror, but also shyly wondering what type of person it might force you to become.

© 1998-2021 HonestGamers
None of the material contained within this site may be reproduced in any conceivable fashion without permission from the author(s) of said material. This site is not sponsored or endorsed by Nintendo, Sega, Sony, Microsoft, or any other such party. SOMA is a registered trademark of its copyright holder. This site makes no claim to SOMA, its characters, screenshots, artwork, music, or any intellectual property contained within. Opinions expressed on this site do not necessarily represent the opinion of site staff or sponsors. Staff and freelance reviews are typically written based on time spent with a retail review copy or review key for the game that is provided by its publisher.