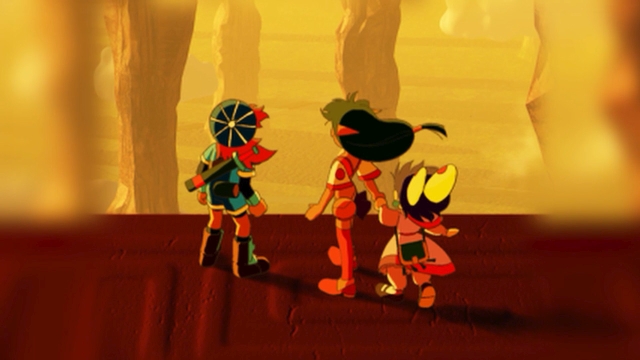 Grandia HD Collection: is it worth it? The answer isn't a simple yes or no, but that horrible, vague duo of words: it depends. Are you new to the franchise? Are you looking to revisit the games with updated visuals and mechanics? Do you already own perfectly functional versions of the original titles? Were you hoping for more than just the first two entries? There's a lot to consider when deciding whether or not to snag this one, and I think it might be best to break down each point like this:

Basic overview for the uninitiated
Grandia is a Japanese RPG series currently consisting of four main games (three numbered installments and Grandia Xtreme), plus a few side titles (Parallel Trippers, Digital Museum and the defunct Grandia Online). The original entry is a straightforward JRPG filled with familiar content, wisely using tropes to its credit rather than detriment. Its sequel acts as its antithesis in some ways, as it offers more or less the same mechanics and a similar story, while utilizing a darker tone and opposing plot devices.

The series showcases two standout features. One is its combat system, which provides the usual suspects in regards to menu-based battle. You select actions like "fight," "item" or "magic" when dealing with monsters, but this time you have a choice to two different standard strikes. One of them is a combo attack that deals a full amount of damage, the other is a critical blow that dishes out less punishment in exchange for either slowing down your opponent or completely canceling their next move. For instance, if a creature is about to hit you with a spell and you nail it with a critical before it has the chance to do so, the spell is completely interrupted and the foe loses its turn. 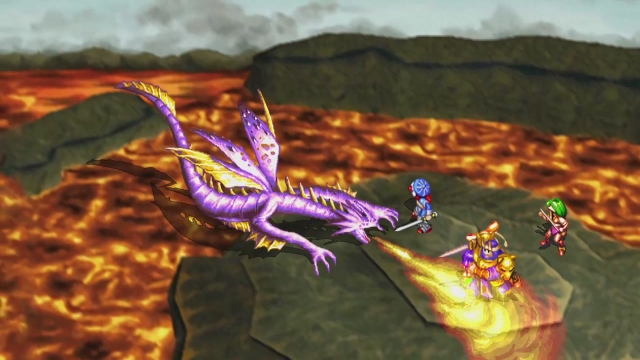 Both games also have different systems in place for managing magic. The first title provides you with "mana eggs," which you spend at shops to teach your party members elemental categories of spells. For instance, you can teach the protagonist Justin fire magic in exchange for a single egg. From there, you level up that character's magic types, weapon proficiencies and skills (which are special attacks) by repeatedly using them. The sequel, however, takes more of a Final Fantasy VII approach, where you equip mana eggs to temporarily teach their users a certain group of spells. Also, they don't power up with use, but must be upgraded using "magic coins" that you earn by defeating foes.

Magic is a huge part of both adventures, especially since you can quickly acquire multi-target nukes capable of annihilating whole enemy contingents in a single blast. As you might've guessed, both of these games are fairly easy because you can wipe out numerous groups of foes without much trouble, and you only bump into legitimately challenging scenes a few times.

Now that you've read the basics, here are some other things to consider regarding this compilation:

This "collection" only consists of two games
The word "collection" isn't incorrect here, but it seems to imply that you're getting more than just a duology. Sadly, Grandia III, Xtreme and the non-online spin-offs are MIA. What do we have to do to finally get an official non-Japanese language copy of Parallel Trippers? Sure, it's probably not that great of a game, but some of us just want to experience it without an emulator and a translation patch, or without having to spend years learning Japanese. 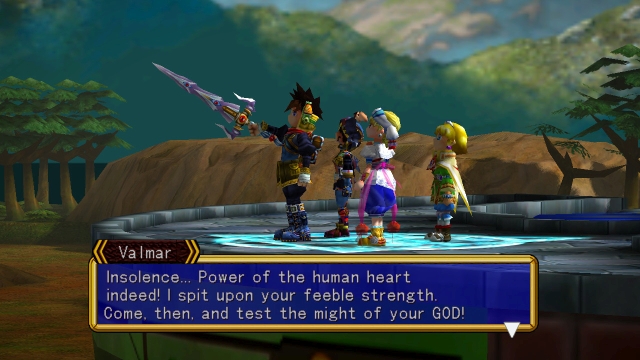 The two games offered are fantastic nonetheless
The original product is a classic that still surprisingly holds up, especially if you're into JRPGs. Yeah, it's basically a cavalcade of familiar concepts, but it presents its well-worn content in a way that's invigorating. The game knows it's a piece of escapism, and leans into that notion. Its tale revolves around a teenager aspiring to be a great adventurer, and sends him on one hell of a journey that spans continents. Though the game doesn't offer an open world by any stretch, its variety of locations, dungeon designs, plot and pacing emphasize that sense of grand adventure.

The second entry tries to be a bit darker, and mostly succeeds. It's shortcomings arrive in the form of infrequent filler segments, cringe-inducing dialogue and wonky comedic timing. For instance, when peril rears its ugly head, one character cracks cheesy jokes. This may have been an attempt to balance the darker story elements, but it sometimes leaves you feeling jarred.

Grandia shows off some decent visual improvements
The second game has been available on Steam for ages now, so it's possible you're interested in finally nabbing the first title on a current-gen platform. As someone who owns and has played through the PlayStation version (but hasn't touched the initial SEGA Saturn release), I will say this version is slightly improved. For one thing, textures are a lot smoother, and most scenery isn't just a mess of pixels anymore. On top of that, this version cuts down on lag, though it doesn't eliminate it entirely. I remember the PlayStation iteration slowing to a creep a few times, especially when rotating the camera. That doesn't happen nearly as often this time, though it does occasionally crop up. 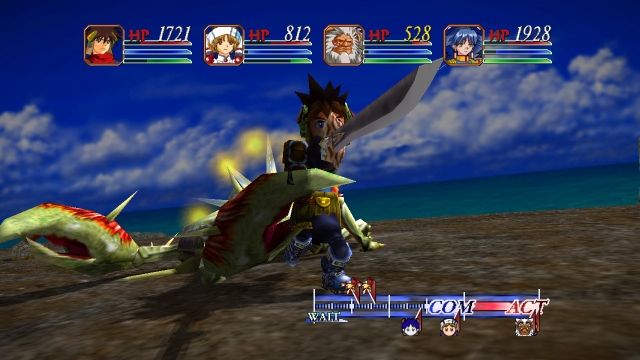 ...But the CG cutscenes are awful
Sadly, the CG segments didn't receive a much-needed facelift. They look just as grainy and dated as ever, if not more so. Back in the '90s, cutscenes like these were a bigger deal because they felt like glimpses into the future, where we were promised fluid animation, smoother character models and a more cinematic experience. Nowadays, these CG sequences look like something from MTV's Liquid Television, except with slightly higher production values.

Grandia also has Japanese voices on offer, and superior camera control
If you don't dig the English voices (and no one will blame you if you don't), you can easily toggle between them and the Japanese voice work. Also, you no longer need to rely on the shoulder triggers to rotate the camera, as the right thumb stick allows you to do so.

Grandia II didn't get much of an overhaul
Though the sequel is still playable, it isn't as good as the Dreamcast version. It lags more frequently, for one thing, especially during dungeons with really busy environments. Also, like the PlayStation 2 version, this one crashes occasionally. It may not happen very often, but I ended up at the Switch menu three or four times while playing, once during a drawn-out boss encounter.

On top of that, the game doesn't show off much graphical improvement. It may appear a little sharper, but that's about it. 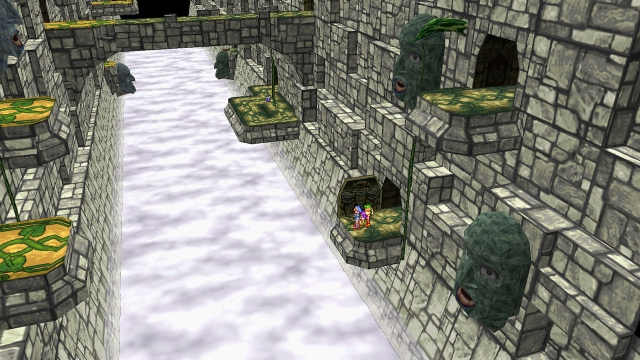 Let's face it: we're at the point where publishers need to stop foisting the buggy PS2 rendition of this game on us and just remake it already. Plenty of RPG fans love it, and are tired of receiving sub-par ports. Give us an adventure that doesn't lag or crash, plus one that offers Japanese voices.

Bottom Line
Whether or not you purchase this duo hinges more on how much you want the first game than anything. Let's face it: Grandia II has been buggy for ages, and this release doesn't change that when it absolutely should. If you're going to play that game, the Dreamcast version is your best bet, even though it's not the easiest rendition to secure these days. Yeah, it's cool being able to play these games on Switch, but it would've been much better if Grandia II actually felt like a significant improvement. Ultimately, Grandia HD Collection is a neat, albeit imperfect, pair of enhanced editions that's worth nabbing during a hot sale, so long as you don't expect a tremendously revamped version of the second entry.
3.5/5

If you enjoyed this Grandia HD Collection review, you're encouraged to discuss it with the author and with other members of the site's community. If you don't already have an HonestGamers account, you can sign up for one in a snap. Thank you for reading!

© 1998-2020 HonestGamers
None of the material contained within this site may be reproduced in any conceivable fashion without permission from the author(s) of said material. This site is not sponsored or endorsed by Nintendo, Sega, Sony, Microsoft, or any other such party. Grandia HD Collection is a registered trademark of its copyright holder. This site makes no claim to Grandia HD Collection, its characters, screenshots, artwork, music, or any intellectual property contained within. Opinions expressed on this site do not necessarily represent the opinion of site staff or sponsors. Staff and freelance reviews are typically written based on time spent with a retail review copy or review key for the game that is provided by its publisher.