Valentina is an indie project from a development team in Brazil. I know from playing lots of games over the years that it's entirely possible to develop good games in South America, but that's not what happened in this case.

The game's eponymous heroine, Valentina, is a young archer girl who lives in a small village somewhere near the edge of a forest where over-sized mushrooms grow. She sets out one morning on a quest to save the world. That admirable task requires her to gather the four elements before facing off against a final adversary of legend. 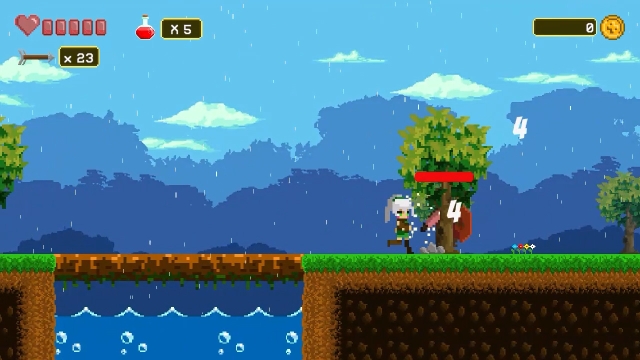 As far as plots go, that's not terribly original. It serves its purpose just fine, though. You start in your house, where you can jump around and get a feel for the very floaty controls. Valentina is able to stay in the air quite a long time after she leaves the ground, almost as long as the princess in Super Mario Bros. 2 on the NES. Her leaps aren't precise, but they do allow her to cross some pretty wide gaps.

Leaving her house, Valentina meets with a young woman who travels with her, though you only meet her as an NPC at various points along the journey. When she talks, you discover that the developers must simply have run text written in their native language through Google Translate or some similar service. The results are not pretty. Here's a sample taken straight from the game:

"your brother assume the kingdom, but he are not going save the king and queen because he are afraid for a trap to take the entire Kingdom of GrellFrorest. Now Joao the fool is going after the spirit of fire trying to save all kingdom alone." 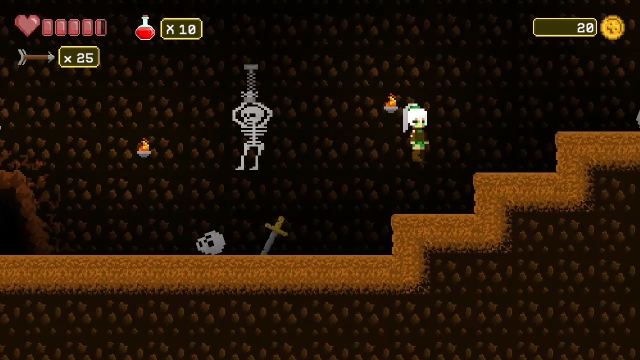 To this news, you can respond in one of two ways. Both options are also poorly translated. I found bad dialogue a constant distraction on my journey, so I quickly tuned out most of the story--which is barely updated anyway--and didn't feel like I was missing much. It's standard fare, anyway, and you're (marginally) better focusing on the gameplay.

That gameplay amounts to relatively standard 2D platforming. At first, I thought it might be something in the Metroidvania style, because there's a life meter and an inventory. You'll find treasure chests scattered along the land, the occasional boss battle, and lots of caverns and forest paths and such. However, progress is purely linear with no backtracking. You just keep moving through new areas and any diverging paths quickly meet back up again. There's no real exploration to speak of, even though stages seem to have been developed with something grander in mind. I'm guessing that at some point, someone said "Let's just finish the thing!"

Visually, the game actually isn't half bad. That's one reason I spent some gold coins to buy it from the eShop, actually. Texture work is solid, and there are lovely backgrounds that lend a sense of fantasy to the proceedings. Valentina herself is animated reasonably well, and boss monsters are imposing enough. While I don't normally comment on such things, I also have to say that I rather like the soundtrack. There's a selection of a few decent songs that match well to the environments you explore as they play. They lend a proper sense of atmosphere, especially the composition that accompanies your exploration of lava-lined caverns. 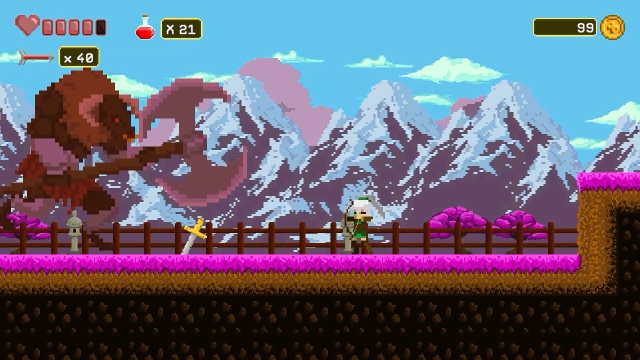 But I keep putting off the part I'm disappointed to have to tell you about, which is the game progression and general experience. And really, they're both quite poor. For one thing, combat is not even remotely satisfying. Enemy AI is virtually non-existent. Your foes just rush back and forth along the limited areas where they appear. Some will fire projectiles at you, while others just try to brush up against you to inflict damage. Meanwhile, you fire shots from your bow that do an unreliable amount of damage. I can't tell for certain whether a shot to the back inflicts more harm or not, because it all seems fairly random. If you hit a target, you might suppose naturally that it would turn and rush you, but it doesn't. The orcs or whatever just keep patrolling and if you're reasonably careful, there's no reason one should ever even hit you.

When you defeat a monster, it often drops loot. Sometimes this is gold coins I've never found a way to spend. Sometimes, you'll pick up more arrows. This is a welcome development, as you're not firing from a bottomless quiver. If things go badly, even if you never miss a target, you might run out of projectiles entirely. Then you had better hope a chest randomly gives you some so you can resume the fight. Or, every bit as conveniently, you can just run past or jump over most of your enemies. Sometimes you'll take damage, but then you can just gulp down a potion and keep going. They're reasonably plentiful. 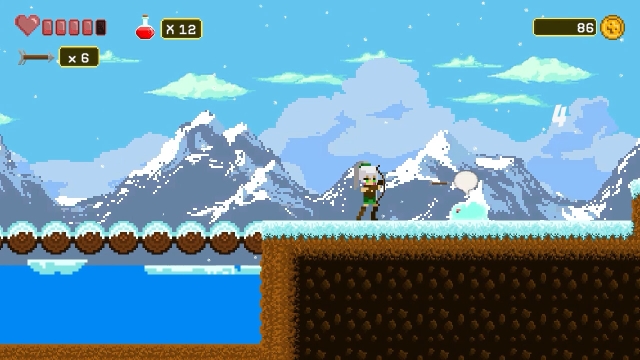 Most of your deaths will come not from monsters, but from environmental hazards. Chiefly, you'll fall into pits you couldn't even see because the camera doesn't scroll in the right directions. I made a lot of blind leaps, looking for the tops of trees to tell me there was probably a ledge below somewhere that could offer safe footing. In the early stages, this is a reasonably good way to go, but sometimes there aren't any trees and there's no apparent way forward so you just have to take a leap of faith. That leap might take you to solid ground, or it might send you plummeting to your death in a pool of water or similar.

To make matters worse, Valentina isn't terribly good at jumping when she approaches the edge of ledges. If you run toward a ledge and have to make a long leap, you'll need to start jumping early just to make sure the command registers before you advance too far. Sometimes, that means you can't jump quite far enough to reach the target platform, even though you glide so far. On top of that, later areas include a lot of moving platforms over beds of spikes, and sometimes you'll pass through a platform you seemed to land on just fine. Sometimes, you find that the last checkpoint was a really long ways back. So the limited exploration the game does offer isn't much fun.

I could keep complaining, but I suspect you get the idea. Despite some components that show definite promise, Valentina is a disappointing package even at a budget price. A word salad script, paired with awkward controls and leaps of faith and mindless enemies are at odds with an occasionally vibrant world and a compelling soundtrack. Ultimately, the game's biggest flaw is that it simply doesn't offer an enjoyable enough experience to reward whatever time you might invest. Hopefully, the team responsible can try again and with better results the next time around.
1/5

If you enjoyed this Valentina review, you're encouraged to discuss it with the author and with other members of the site's community. If you don't already have an HonestGamers account, you can sign up for one in a snap. Thank you for reading!

© 1998-2021 HonestGamers
None of the material contained within this site may be reproduced in any conceivable fashion without permission from the author(s) of said material. This site is not sponsored or endorsed by Nintendo, Sega, Sony, Microsoft, or any other such party. Valentina is a registered trademark of its copyright holder. This site makes no claim to Valentina, its characters, screenshots, artwork, music, or any intellectual property contained within. Opinions expressed on this site do not necessarily represent the opinion of site staff or sponsors. Staff and freelance reviews are typically written based on time spent with a retail review copy or review key for the game that is provided by its publisher.