The era of steam-powered ingenuity ushered in all sorts of technological achievements for humanity, and with it came malicious intent; a mad scientist has stolen plans for the most advanced tech ever devised, intending to use it for world domination. In the truest of video game fashions, a lone guy is sent out to stop such a villainous scheme, and even better, this bearded fellow with a goggle-laden top hat marches into danger unarmed. How does he counter the multitude of metallic contraptions standing in his way? Simple: he'll grab bombs placed in crates scattered all over the ground... for some reason. Once equipped, you'll guide "This Guy" through an abundance of cave settings, planting bombs to either blow away enemies or an unbelievable number of crates until you arrive at the end-level ladder.

However, unlike Bomberman, you can't just endlessly use explosive material; the crate supplies exist for a reason, as each one contains only three bombs. This gives the game a strategic puzzle flare to it, forcing you to make careful and calculated decisions throughout. This isn't apparent at first as, typical of standard video game flow, stage layouts start out basic, giving you an opportunity to feel things out with enemies stuck in very straightforward, linear pathways. Here, you'll figure out the default blast radius for bombs and know how to do chain explosions with flammable barrels, the latter having a much wider radius. 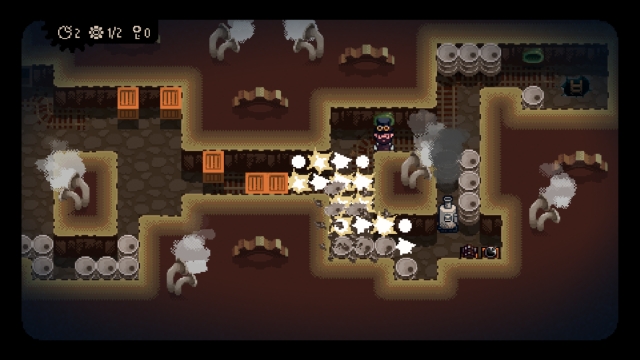 But soon enough, level maps start expanding with multiple forks, and you'll encounter robots in more open settings who also gravitate to your location from a distance. This is where the strategic element becomes more tense, as a mistake late in the level could ruin a good run. Say you accidentally miss destroying a robot in an enclosed space; the crates are gone, the killing machine is free, giving chase, and now you have to correctly time a bomb drop so that it explodes as the threat passes by. Make too many mistakes and you'll likely run out of bombs and ultimately your life, as a single touch from an enemy restarts the level and undoes all your progress. It may sound daunting, but finishing a level can feel rewarding if you think things through, especially if you went the extra distance of completing the side task where all robots must be destroyed.

As you make headway through the first 14 or so levels of the Caves, the game does a solid job mounting the difficulty and introducing level gimmicks, such as dodging laser turrets or having to push crates over buttons to open a door. However, as you start going through the subsequent Arctic levels, the quality takes a dip. Here, the game just stops presenting new enemies, hazards, and gimmicks for a weirdly long stretch of time. How long? 20 levels. Then, when you finally encounter a new opponent... it's just a robot that navigates back and forth between walls. In the very next level, there's a gimmick where pushing a crate makes it slide until contact is made with something else; fitting for a level taking place in a cold environment. But you know what's odd about those two additions? They're at the tail end of the Arctic levels and never used again. 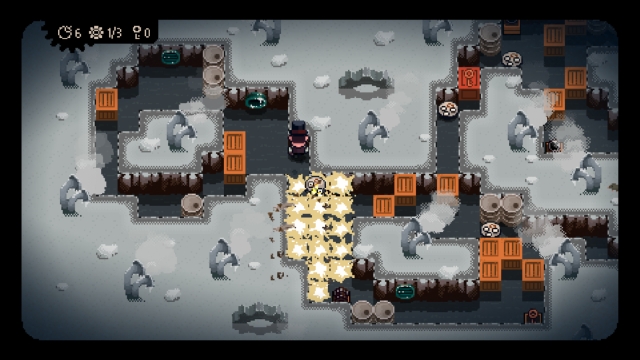 What's even more strange is what happens going forward, as the game continues to add nothing new for the final 18 levels within the "Castle," a setting that's just a slight variation of the Caves and Arctic backdrops. There's not even a sense of finality when you near the very last levels, not even an attempt at inserting a boss fight or grand finale; it just ends. The level layouts themselves are still fine, as they do their job making you think up solutions to handle enemies while using a limited inventory, but even they start blurring with one another. Unfortunately, that just adds to the overall issue: there are 54 levels in all, and 38 of them are easily interchangeable. You can swap the order of the Arctic and Castle levels and tell no difference.

Mad Age & This Guy is a nice mixture of Bomberman mechanics and puzzle-solving elements, and it's clear the devs, Atomic Wolf, put some thought into how you approach levels. But it also quickly becomes apparent the game runs out of creativity just barely 18 levels in, and the puzzles begin losing steam themselves several levels after, usually offering slight deviations of earlier layouts. If you want to waste time on a puzzle product, Mad Age & This Guy is still a playable title that'll take off a couple hours of your time, but don't be surprised when redundancy starts settling in just a dozen or so levels in. A little bit more diversity would have gone a long way in this bomb-toting adventure...
2.5/5

If you enjoyed this Mad Age & This Guy review, you're encouraged to discuss it with the author and with other members of the site's community. If you don't already have an HonestGamers account, you can sign up for one in a snap. Thank you for reading!

© 1998-2020 HonestGamers
None of the material contained within this site may be reproduced in any conceivable fashion without permission from the author(s) of said material. This site is not sponsored or endorsed by Nintendo, Sega, Sony, Microsoft, or any other such party. Mad Age & This Guy is a registered trademark of its copyright holder. This site makes no claim to Mad Age & This Guy, its characters, screenshots, artwork, music, or any intellectual property contained within. Opinions expressed on this site do not necessarily represent the opinion of site staff or sponsors. Staff and freelance reviews are typically written based on time spent with a retail review copy or review key for the game that is provided by its publisher.