After Borderlands 2 took all the things I enjoyed about the first game in that series and made everything bigger and better, I suppose I should have known what direction things would go -- a shameless cash grab to wring a bunch more money out of the XBox 360's generation before moving on to the new era of systems!

Borderlands: The Pre-Sequel isn't a bad game, it's just somewhat disappointing for a guy like me who found the first game to be a lot of fun and the second to be flat-out awesome. The engine hasn't changed, there's only one addition of note to the formula and instead of a ton of DLC expansions, both large and small, you only get one large add-on and a handful of smaller additions, such as a pair of new characters. From personal experience, it also seems that a few cracks were starting to appear in the engine, as I noticed a few hitches in how smoothly the game ran. Nothing major, but those frame rate glitches are kind of noticeable when you're running around and gunning bandits down in the sort of frenetic shooting action this series is known for providing.

One could also say that, unlike the more recent Borderlands 3, this game really didn't break any new ground as far as advancing the series mythos. Instead, it appears that Gearbox realized they had a super-popular villain in Borderlands 2's Handsome Jack and decided to milk him for all he was worth, creating an interval game between the first two that shows both his rise to power and how he became the smug, psychotic dictator gamers took delight in stopping.

In Pre-Sequel, the action starts with you showing up at Helios, a Hyperion-owned space station, to bail out Jack, a seemingly-random employee attempting to ward off the invasion of a powerful army. While the two DLC characters are essentially newcomers to the series, the four original ones should be familiar in some shape or form to series veterans. Athena was an ally in one of the first game's expansions, Wilhelm and Nisha (aka: Sheriff of Lynchwood) provided boss fights in the second game and Claptrap has been an incredibly annoying sidekick throughout the series. 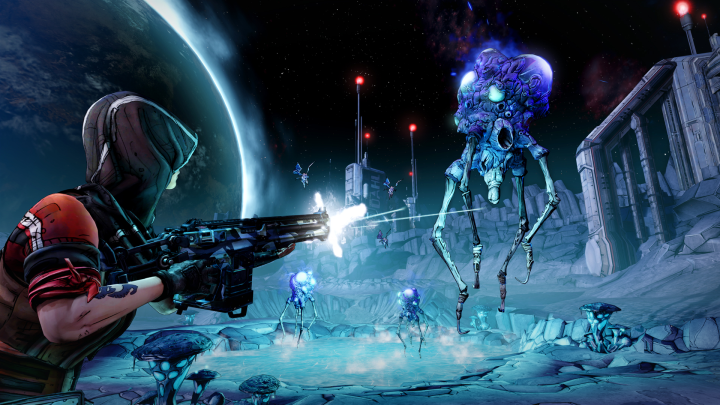 As one could expect, each of these characters has multiple skill trees and, by gaining levels, you can add all sorts of buffs and improvements to your pick. For example, using Nisha, you'll gain the ability to enter "Showdown" mode, which gives you auto-aim and a damage buff for a few seconds. After getting to the end of my choice of skill trees, I got the ability to get a second gun as long as I was using a pistol. Combining Showdown's additional damage with an additional gun made her a force to be reckoned with and carried me through a few tough late-game encounters with far less frustration than I'd been experiencing before I'd unlocked that skill.

As one also could expect, that whole "bail out Jack" deal doesn't work as intended and you'll have to flee to Elpis, a moon of previous setting Pandora, in order to find some allies to assist in reclaiming the station. To make this job a bit more stressful for all involved, Hyperion was searching for a Vault on that moon and Colonel Zarpedon, the leader of that opposing army, feels that is a very bad idea. So bad that she's willing to use Helios' weaponry to destroy Elpis even if doing so kills every person currently on that rock.

While Jack does have a few potential friends on Elpis, including Borderlands' Vault Hunters Lilith and Roland, ex-girlfriend and series regular Moxxi and a former Hyperion employee who holds authority in Elpis' main community, it shouldn't come as much of a surprise that things don't exactly work out as planned. After all, this game takes place before Borderlands 2 and in that game, Jack is a sociopathic dictator whose seething rage is barely concealed by a goofy exterior and snide sense of humor. And so, as I gunned my way through missions, I also watched him absorb setbacks and observed those inner demons gradually break through until he'd completely changed into the Handsome Jack I remembered so well.

Watching him gradually gain power while losing his humanity was the highlight of this game. After that, my main praise is derived from the simple fact that Gearbox didn't screw up the basic formula. You still fight bandits, soldiers and assorted hostile wildlife throughout a variety of settings. You'll collect an ungodly number of guns, as well as grenades and shields, and swap out old for new with regularity. You'll gain experience for killing foes and completing quests and parlay that into gaining levels and boosting your character's skills. The core Borderlands experience is still there. 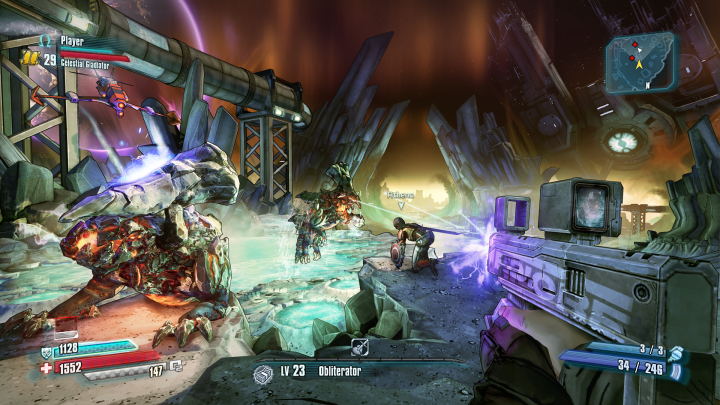 It's just a matter of that core experience not working quite as well when things took a step backwards from Borderlands 2. The main new feature added to the mix is low gravity. Since you're spending much of your time on a moon, you'll be able to jump really high, which often is used to make areas a bit trickier to get through. You'll have to scan your surroundings and plot paths to follow, jumping from one platform to another, while making sure your oxygen unit is full enough to keep you breathing until you can find a location to recharge. At times, the low gravity is put to great use with a few quests that force you to pay close attention to your surroundings while trying to figure out the proper sequence of jumps that will take you to your destination. At other times, you'll be in enclosed areas with normal gravity and none of this stuff will apply for however long it takes until you're back outside again.

Still, if my only complaint was that Pre-Sequel didn't break a lot of new ground, I'd still be happy to slap a really high score on it and walk away content that I got to experience Gearbox's loot-oriented shooting action once again. But there were just a couple things that I found annoying enough to ensure that my joy was counteracted by moments of intense frustration.

As I played through this game, I felt that things weren't quite as well-balanced as before, leading to random difficulty spikes that were very noticeable. When it was finally time to reclaim Helios, I started out with a few quests in an area that was pretty easy. And then, after clearing a few areas of the ship, I moved on to an area infested with powerful soldiers capable of tearing through my shields and health very quickly. Side quests, which took the form of escort missions more frequently than I'd like, proved frustrating and simply trying to make progress easily could result in a death or two. Honestly, the only reason the entire final quarter of the game wasn't an excruciating slog was because of gaining Nisha's double-pistol skill and doubling my attack power. In other words, this game has a difficulty spike extreme enough that I needed a pretty overpowered skill to overcome it and get back to having fun. 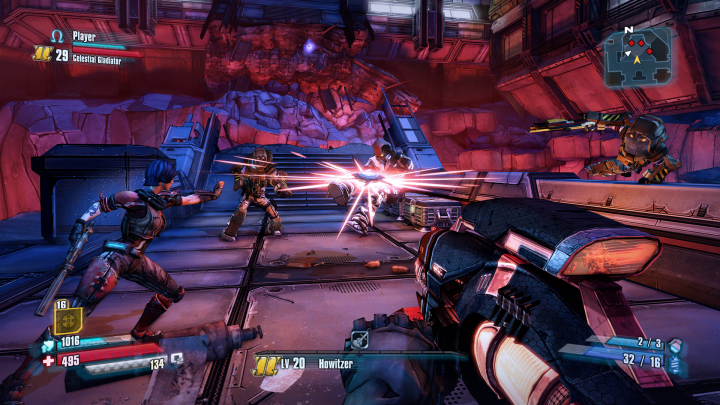 At least when I wasn't struggling with a handful of boss fights. In the first two games, it was rare when I didn't get some amount of enjoyment from those battles. Here, a lot of them fell flat for me because I had this sneaking suspicion they were devised for multi-player and if you're going solo, well, good luck! A lot of them possess attacks that can utterly destroy a person, so if you don't have a pal around to give you a healing hand when you enter Fight For Your Life mode, it can be way too easy to go from full health to death in next to no time. Two late-game bosses can emit large shockwaves where, if you miss the timing on your jump, you'll go from full health and shields to having no shield and barely enough life to absorb a bullet or two. To me, there's a difference between giving players a fun challenge and giving them a "if you can't get the timing down on one particular move, you're screwed" ordeal and from my perspective as a guy who struggled with timing that move, they fell on the wrong side of things a few times here.

Frustration with bosses is what actually led to the end of my time with this one, as after beating the main game, I hit a brick wall against a giant Thrasher boss in its Claptrap-themed expansion -- an opponent whose tentacles could slap the shields and life right out of you with only a few hits while you're trying to deplete its shields and health in a fairly small arena where it's virtually impossible to get away from those attacks barring falling off the place to your death. It was the sort of aggravating fight the previous two games did a good job of avoiding. And it wasn't the first such confrontation; just the last I was willing to stomach.

Which makes this the first Borderlands game where I can't say that I beat everything with the exception of multi-player raid bosses and some of those arena challenges sprinkled throughout their worlds. That's the law of diminishing returns for you. On its own, Pre-Sequel is a good game that's let down a bit by some annoying bosses that seem designed for multi-player. But as the third game released in a series where the previous one falls among my favorite 360 games, it's hard to look at this as anything other than a letdown that's mainly worth playing to watch Jack's descent into becoming the villain I loved to hate in Borderlands 2.
3.5/5

If you enjoyed this Borderlands: The Pre-Sequel review, you're encouraged to discuss it with the author and with other members of the site's community. If you don't already have an HonestGamers account, you can sign up for one in a snap. Thank you for reading!

© 1998-2020 HonestGamers
None of the material contained within this site may be reproduced in any conceivable fashion without permission from the author(s) of said material. This site is not sponsored or endorsed by Nintendo, Sega, Sony, Microsoft, or any other such party. Borderlands: The Pre-Sequel is a registered trademark of its copyright holder. This site makes no claim to Borderlands: The Pre-Sequel, its characters, screenshots, artwork, music, or any intellectual property contained within. Opinions expressed on this site do not necessarily represent the opinion of site staff or sponsors. Staff and freelance reviews are typically written based on time spent with a retail review copy or review key for the game that is provided by its publisher.