Baltoro Games seems to have realized something not everyone knows: people still enjoy playing solitaire, that classic card game that kept lonely people so thoroughly entertained in decades past. Accordingly, the developer has produced a series of Nintendo Switch games based on some of the more popular iterations of that game, including Klondike Solitaire that I am reviewing here.

Klondike Solitaire, like Spider Solitaire and Freecell Solitaire Deluxe for the same hardware, presents players with a classic take on solitaire. There are unlockable customization options to keep players coming back for one more round, even after they have satisfied themselves that the card game is more or less on point. These include numerous "tables" to unlock (basic backgrounds with occasional background noise or lighting effects), a variety of card faces and backs, and most of 30 unique songs that serve as a soundtrack for the "action." 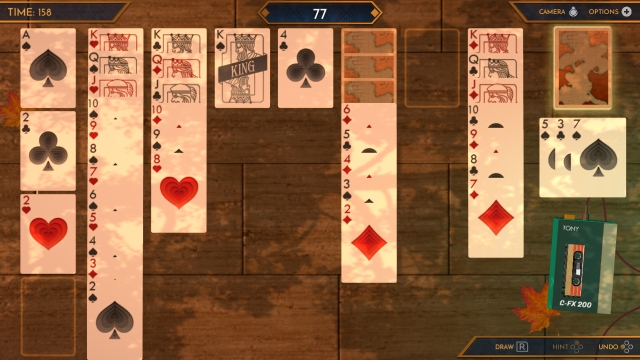 The interface is barebones, and not entirely intuitive when it comes to getting into a game. To change your settings and implement something new you have unlocked, you have to select "Equipment" from the main menu (except in the case of the background music, which you can change from the pause menu). When you finish a round or just want to start over, you have to select the "To Main Menu" option rather than "Restart," or else you lose any experience points gained for play. Choosing to return to the main menu doesn't actually take you to the main menu at all. Rather, it tallies your score and then you can press another button to finally exit to the main menu (as promised) or you can "Continue" to deal a new hand. I feel like the interface could use a bit of work, but it's serviceable once you get used to it.

Interestingly, the developers also included a variety of "Achievements" that award you points you can apply to unlock the aforementioned customization content. Sometimes, you'll see a prompt appear on-screen to let you know you've accomplished something worthwhile. You have to head to the "Statistics" screen if you want more information about what you did, and must "Claim" your points to receive them. I kept forgetting to complete that step, and played enough hands to finally unlock nearly everything that way instead. Some of the Achievements are neat and reward skilled or hasty play, but a lot of them require you to fiddle with different deck variants and such. They feel more like busy work than anything. 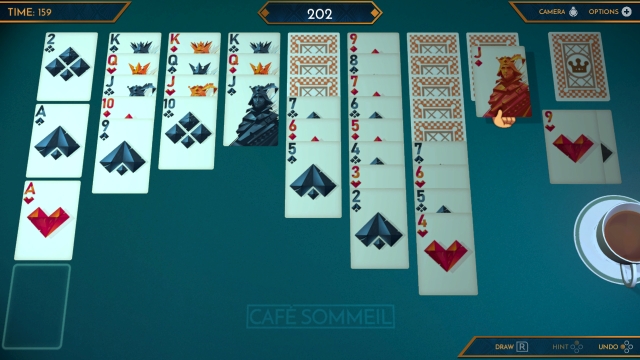 Though you can play Klondike Solitaire either on your television in docked mode with the controller of your choice, or in handheld or tabletop mode, there's no way to tap the touchscreen to move around cards. To me, that feels like a missed opportunity, since the system might easily have supported that input method and playing would have felt more like a simulation of a game of cards. However, the controls are otherwise sufficient. You can cycle through columns of cards pretty quickly, or press the A button twice in rapid succession if you want to toss an ace to the side or move a card to an obvious column elsewhere on the table. Once you get used to everything, you'll probably find yourself routinely finishing hands in as little as 4 to 5 minutes if you feel the need for speed.

I've made it this far into the review without describing how the "Klondike" version of solitaire plays, simply because I felt the other stuff will probably do more to point you toward--or away from--a purchase than the rules of the card game. But you may be like me, a fairly casual fan of the solitaire (I actually only bought this one because my wife loves solitaire and I happened to catch it on sale) who isn't entirely clear on which version plays which way.

Klondike Solitaire adopts the very common rule set I remember enjoying when I played the imaginatively named Solitaire that came installed with old Windows 95 and 98 machines. There is a deck positioned to the upper right in this case (rather than to the left), from which you can draw cards. There also are seven columns of cards that from left to right contain 1, 2, 3, 4, 5, 6 and 7 cards with only the top card in each column turned face up as play begins. Your goal is to start and build stacks to the left of that field, with each one including stacks that run from Ace to King. As you move cards around and draw from the deck, cards must alternate between red and black and follow that same numerical order. There's a fair bit of strategy that goes along with those rules, since you have to decide which stack to tend to in which order, which cards to turn over to give yourself more room to work and so forth. 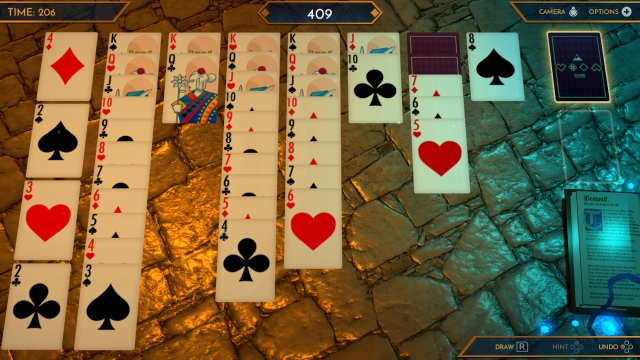 Helpfully, the developers have included the "undo" option, in case you play a card and then immediately realize you didn't want to make that exact move. Of course, this could be abused, but since you're playing alone and there are no leaderboards, who really cares? A less helpful tool is the "Hint," which makes suggestions about where to move cards in case you find yourself stuck and want to keep trying. However, cards often simply slide between one or two columns, without a lot of context provided beyond that. Or arrows appear briefly on-screen to highlight potential plays, without other explanation. The advice is generally sound, and sometimes helpful, but it seems too basic to really help those learning the game. You know, the very people most likely to ask for help.

Klondike Solitaire is offered on the Nintendo eShop for $8.99 at present, or you may find it with a substantial discount in place that allows you to snag it for less than a buck. Though its design does fumble here and there and lacks touchscreen controls, the game manages to reasonably simulate solitaire while providing a few extra hooks to keep the player engaged. My wife liked it a lot and got quite a few hours of play out of it. For that matter, so did I. Certainly, it's not the sort of title everyone will find appealing, especially at its starting MSRP, but I do recommend giving it a look if you catch it on sale and happen to appreciate digital solitaire.
3.5/5

If you enjoyed this Klondike Solitaire review, you're encouraged to discuss it with the author and with other members of the site's community. If you don't already have an HonestGamers account, you can sign up for one in a snap. Thank you for reading!

© 1998-2020 HonestGamers
None of the material contained within this site may be reproduced in any conceivable fashion without permission from the author(s) of said material. This site is not sponsored or endorsed by Nintendo, Sega, Sony, Microsoft, or any other such party. Klondike Solitaire is a registered trademark of its copyright holder. This site makes no claim to Klondike Solitaire, its characters, screenshots, artwork, music, or any intellectual property contained within. Opinions expressed on this site do not necessarily represent the opinion of site staff or sponsors. Staff and freelance reviews are typically written based on time spent with a retail review copy or review key for the game that is provided by its publisher.