The thing with the 32X that people dont get (or are happy to wilfully ignore) is that, while it didnt have the power of the shortly debuting 32bit generation, it was still the very first bit of homebound hardware out there that could trade specs with arcade machines. And this was kind of a big deal; until the 32X, the vast majority of home ports of arcade games werent true ports at all. The technological gap was too wide, so the likes of Outrun and Afterburner were remade from the ground up in their former image. This had been the case since forever; people wanted the big arcade smashes from the comfort of their own home, but their Atari or their NES didnt have the muscle to let you couch play Double Dragon. Not really; so what you got instead was a gimped version of that game, to the best of the systems capabilities.

There are a million reasons why the 32X didnt work out, but none of those centred on what it was capable of. What SEGA had on their hands was finally a console that could bring the arcades into your living room. Conveniently, SEGA was one of, if not the, biggest player on that market, innovating and redesigning all the games, sitting upon a throne made up of quarter stacks and sticky buttons. They had a back catalogue that defined peoples childhoods and robbed them of allowances. Now they had an avenue to put them in peoples living rooms without any of the justified watering down.

This was kind of a big deal. SEGA had all kinds of top shelf arcade games to fall back on, offering potential buyers a library with proven, pre-established quality. They had the most appreciated dogfighter package with Afterburner, had recently rewritten how arcade racing worked with Virtua Racing and had innovated 3D brawlers with Virtua Fighter. Years prior, they also popularised analogue controls. Also, rail shooting. Step forward Space Harrier. 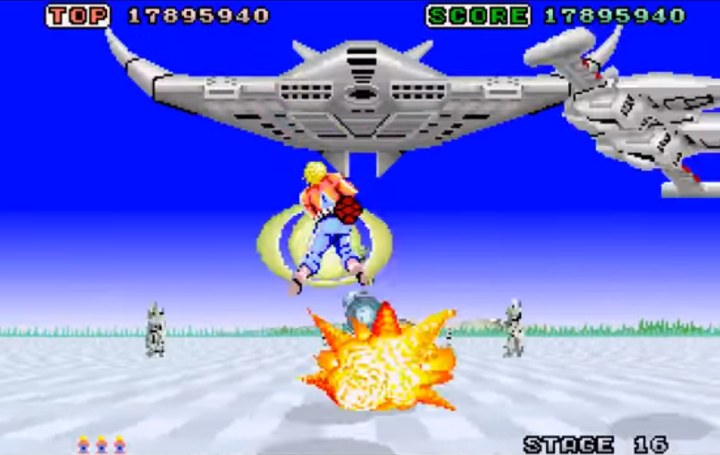 Released in arcades all the way back in 1986, home ports of Space Harrier had been severely lacking in both quantity and quality. It was no wonder: the arcade strain was a cerebral powerhouse, not only making the best use of the technology but also perspective trickery in order to build a kind of pseudo-3D world by building layers of pixels that fooled you into perceiving a dimension that wasn't even there. With the perspective set firmly behind him, cool dude protagonist, Harrier, used his jet pack/laser cannon combo to chart around the screen, dodging or exploding the onrushing obstacles eager to jam themselves right in his smug little face.

Traditionally, when you scrolled and shot, you did so from a horizontal or vertical perspective, making Space Harriers third person assault fresh and exhilarating, even if it wasnt always strictly fair. There was less room for manoeuvring in, less time to react to the onrush, which would be fine if things like trees, giant rocks or homicidal zen faces werent routinely obscured by the explosions caused from your cannon, or by Harrier himself. But even your inevitable demise was a glorious octane high; it was so against the norm in its natural habitat of mid-eighties arcades that people were willing to put the time (and small change) into learning the machine, in curtailing its shortcomings.

The 32X is never going to capture that unique ambience or the rolling cockpit cabinet the more deluxe arcade might have been lucky to acquire and is noticeably without the prophetic use of analogue controls, but it meticulously nails everything achievable. The fantasy acid trip setting returns with its out of place chequerboard floor, rolling purple skies and the unpredictable enemy roster are all accounted for. Cyclopean Mammoths and breakdancing golems mix with mundane flaming comets and steel-gleamed fighter crafts. Stone faces take flight in droves, splintering into broken rock if destroyed, or mashing you into the ground if you fail to stop or avoid them. Dragons become repeat offenders, either serving as serpentine end-of-level bosses (sometimes featuring a second head where their tail should be, just to ensure you have no safe angle of approach) or as temporary steeds to surge through bonus stages with, making a destructive mockery of all those bloody trees youve been face planting into all game. 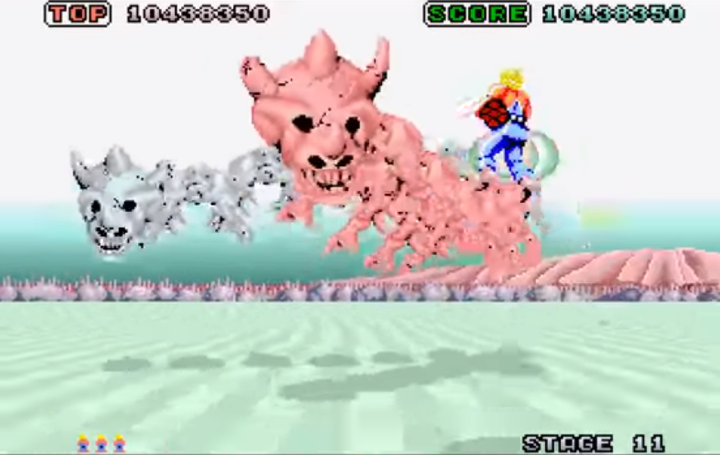 Youll lose a lot of lives to them, and it wont always be your fault. And that feels a little hard to forgive sometimes; trees shouldn't be a bigger threat than triple headed turtles and murderous tri-leafed polyps, especially when masked by evidence of your own progress. Its a little easier to swallow now youre spending virtual continues rather than real life currency, I guess. Space Harrier continues to rear its weird not-really 3D head in numerous SEGA franchises, being playable in arcades in such games as Shenmue and Yakuza, so has the ability to stop you punching Japanese thugs in the face for a spell of dragon genocide.

Theyre all good ports, but they should be when running on modern gaming consoles. That the 32X, a silly shaped add-on that nobody was interested in heralded the missing link between home console and arcade so remarkably will probably forever be forgotten. Periodically remembered and advertised only by people so uninclined to find a productive use of their free time that they regularly rake through obscure console libraries to quietly remind us.
3.5/5

If you enjoyed this Space Harrier review, you're encouraged to discuss it with the author and with other members of the site's community. If you don't already have an HonestGamers account, you can sign up for one in a snap. Thank you for reading!

© 1998-2020 HonestGamers
None of the material contained within this site may be reproduced in any conceivable fashion without permission from the author(s) of said material. This site is not sponsored or endorsed by Nintendo, Sega, Sony, Microsoft, or any other such party. Space Harrier is a registered trademark of its copyright holder. This site makes no claim to Space Harrier, its characters, screenshots, artwork, music, or any intellectual property contained within. Opinions expressed on this site do not necessarily represent the opinion of site staff or sponsors. Staff and freelance reviews are typically written based on time spent with a retail review copy or review key for the game that is provided by its publisher.