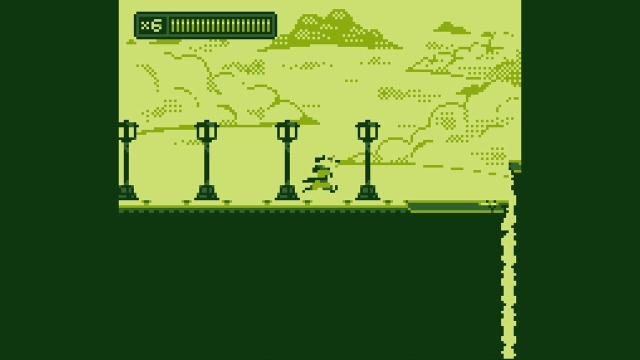 Dogurai stars a dog who isn't your garden variety pooch. Get this: he's also a samurai. And like any good bipedal canine who wields a katana, he's on a mission to vanquish evil robots and the like. As you can imagine, these punks don't just sit around waiting to be chopped in half, but erect fortresses comprised of floating platforms, pesky-but-passable obstacles, and special chambers to house their high-ranking officers. Apparently, our hero (named Bones) isn't fond of robots doing this, and has decided to cut them all to bits.

At least that's how I imagine the story goes. The game doesn't offer much detail in regards to plot, nor does it really need to. As this is yet another in a long line of retro homages, you won't see a whole lot of cutscenes used to develop a rich tale. Rather, the game leaves you to fill in the gaps by dropping little hints here and there, preferring to show instead of tell.

Over the last decade, we've seen quite the deluge of games of this nature. It's gotten to the point that plenty of cheap, poorly made titles have oozed their way onto multiple platforms, from mobile storefronts to the once-glorious Steam. At first glance, Dogurai looks like it could be one such title, albeit with a Game Boy-ish aesthetic. Rest assured, though, that although this game is imperfect, it's definitely not a crummy asset flip churned out for a quick, dirty dollar. 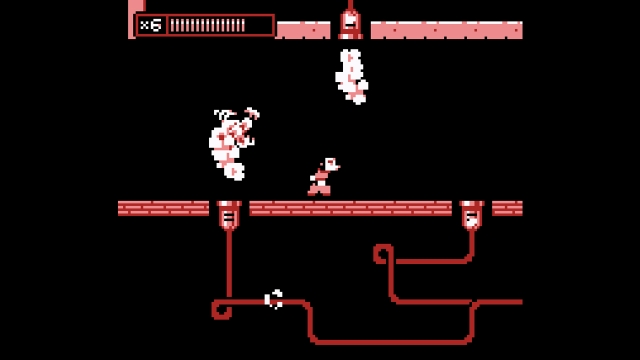 You can tell right away that developer Hungry Bear Games put a lot of effort into this piece. Stages not only display some clever details, but also throw out some re-worked references to older games. For instance, one stage utilizes lasers that span the entire screen, similar to those seen in Quick Man's stage in Mega Man 2. This time, though, we actually see the cannons that fire the beams, plus they don't instantly kill you.

Now and then, you also run into memorable moments that add some variety to the campaign. During one level, Bones climbs into a huge box and bursts out the other side riding a motorcycle. From there, you must negotiate a series of platforms or else crash and splatter. Another segment involves outrunning flowing lava while either dodging/killing foes or getting around obstacles. Granted, neither of these scenes are original, but they're nonetheless engaging, intense and challenging additions to an otherwise straightforward side scroller.

The rest of the game offers more or less what you would expect from a faux-retro platformer: you venture forth, kill things with your sword, try not to fall into pits and swear a lot. In some ways, the proceedings smack of both Mega Man and Ninja Gaiden. As with the former game, you select which stages you wish to visit, plus you can execute a handy slide maneuver. However, Bones handles a bit more like Ryu from the latter title, especially when jumping or slashing. Of course, this also means your weapon's range is limited, so you need to be spot on when dicing up the opposition. 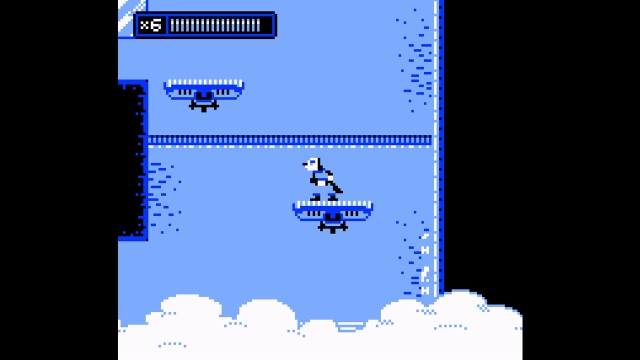 For a while, the combination of speedy, simple mechanics and tough situations proves entertaining. Though Dogurai isn't groundbreaking, it's early phases at least hook you up with some fine side-scrolling action.

And I really wish it remained that way throughout...

Before long, you notice two huge things that somewhat tarnish this title. For one thing, combat becomes needlessly frustrating. Since Bones' weapon of choice is a blade, he has to get close to his opponents to defeat them. Most games take liberties with this notion by allowing you to cleave right through your adversaries without breaking your stride or by ridiculously lengthening the arc of a slash. And then there's whatever the hell Symphony of the Night was doing with the Crissaegrim. Here, though, you have to practically hug a creature to slash it, plus you can't strike while running. Bones actually needs to come to a momentary halt in order to carve up his targets, which leaves the action feeling a bit clunky at times.

This isn't to say that combat totally constituted a strike against the title during my playthrough. I didn't have trouble too often when dealing with foes, especially those with large sprites. Mainly, I had some trouble taking out tinier enemies, and I bumped into enough of those to add to my frustration.

Unfortunately, the above example isn't even the worst of what you can expect. Though most of the challenges that await you consist of fair and balanced platforming, plenty of segments are full of cheap, irritating gauntlets. The type that crops up the most places you on tiny moving platforms while dodging oncoming projectiles. Sometimes you can actually slice the bullets, removing the inherent need to sidestep or leap over them. However, the game loves to fire shots at you from off-screen, rendering you unable to reasonably deal with them unless you have the cat-like reflexes. Since you're a dog, you can see where that might be troublesome... 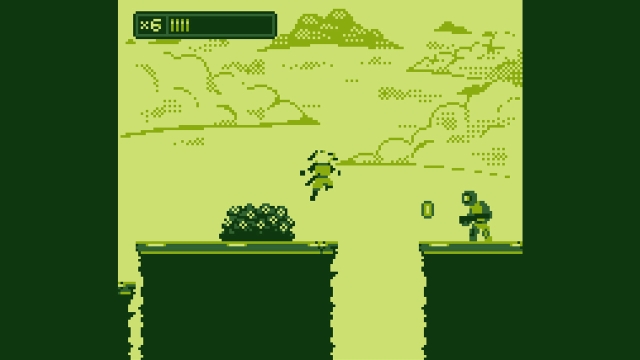 The experience occasionally gets tiresome, too. You constantly navigate a series of platforms, only to plummet and start over because you get nailed by a bullet you couldn't have seen coming. Or you jump over a pit, only to smack into an unseen foe that leaps out of the ground. Or part of the background inexplicably erupts, hitting you with a damaging substance you couldn't have anticipated. Admittedly, these trials are surmountable with experience, but they're no less aggravating, as if these roadblocks are just there to mess with you in the worst way. I don't want to accuse the developers of malice, but it's hard to see off-screen bullets hitting you as anything but malicious.

Thankfully, after you suffer through all of this nonsense, you get some pretty decent, pattern-based boss encounters as rewards. These segments flow the way any good platformer boss ought to, as if you're solving a violent puzzle. Through observation and experimentation, you figure out when to strike and how to survive your opponent's onslaught, not to mention discover when the villain is vulnerable to a devastating string of QTE slashes. It's good to see these difficult stages are capped off with climactic rumbles.

Even with all of the irritating moments, it shouldn't take seasoned 2D platformer longer than two or three hours to get through Dogurai. By the time you reach the end, you might be glad to finally put this experience behind you. Though it isn't really a terrible adventure, it sports a few segments that represent missed opportunities. This could've been a killer platformer had it included improved combat mechanics and fewer seemingly devious situations. As it is, though, the game is still a pleasant, albeit frustrating, love letter to the venerable genre.
3.5/5

If you enjoyed this Dogurai review, you're encouraged to discuss it with the author and with other members of the site's community. If you don't already have an HonestGamers account, you can sign up for one in a snap. Thank you for reading!

© 1998-2020 HonestGamers
None of the material contained within this site may be reproduced in any conceivable fashion without permission from the author(s) of said material. This site is not sponsored or endorsed by Nintendo, Sega, Sony, Microsoft, or any other such party. Dogurai is a registered trademark of its copyright holder. This site makes no claim to Dogurai, its characters, screenshots, artwork, music, or any intellectual property contained within. Opinions expressed on this site do not necessarily represent the opinion of site staff or sponsors. Staff and freelance reviews are typically written based on time spent with a retail review copy or review key for the game that is provided by its publisher.