Waifu Uncovered, the only game I know for sure that the team at One Hand Free Studios has developed to date, is not exactly subtle. It's a vertically scrolling shooter and your enemies are aliens. For reasons not quite known, they've infected the clothes that a number of buxom young ladies around the world are wearing. Your job as the hero is to blast the fabric away and free those unfortunate lasses from the clutches of evil. You can do this with or without censorship enabled, and there's even an unlockable "one-finger" mode.

But wait, you might say. This game is available on a Nintendo platform. So it's a safe bet there's no actual nudity here even though women are losing their clothes with your assistance, right? Wrong! 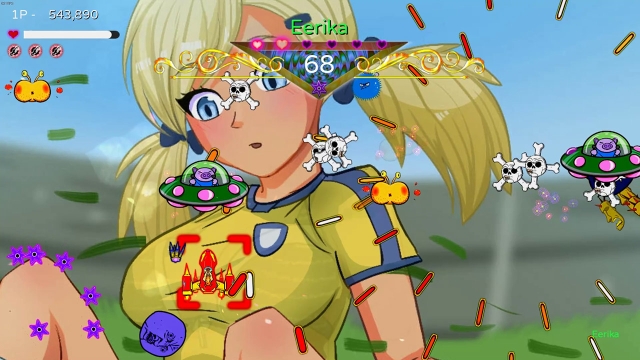 It's true there's not much unlocked and not much hand-drawn skin on offer when the game begins, but that won't remain true for long. You can head to Normal mode, which lets you play through stages until your ship crashes and burns. Along the way, you'll probably start unlocking things. There are a total of seven stages available, and you choose the course you plot through them. One of two options is always slightly easier than the other, so you can challenge yourself--or not--depending on your aspirations.

Each stage corresponds to a young woman with clothing tainted by those nasty aliens I mentioned. Girls have profiles that read about like something out of a typical anime (which explains the use of the term "waifu" in the title). The usual stage begins with a sort of bonus round, where a bunch of aliens fly around the screen. If you can blast them all out of the air, collecting power-ups as you do it, you'll activate a "clear" mode that treats you to a less obstructed view of your target as you help her part with her suddenly malicious attire throughout the stage's remainder.

After the bonus round, it's time to get down to the business of shredding clothes with your pea shooter. This process is divided into waves you can speed through by blasting targets out of the sky more efficiently. Defeated aliens drop tokens you collect to improve your score and fill a meter. Some of those vanquished adversaries also drop power-ups, if you clear out one group or another, which impact things like the ferocity of your firepower or ship, the width of your shots and even the efficacy of your "assistants" that accompany your ship into battle. Some power-ups are actually bad and will downgrade you, but they're presented in obvious red. You can generally avoid them once you know to look for them. 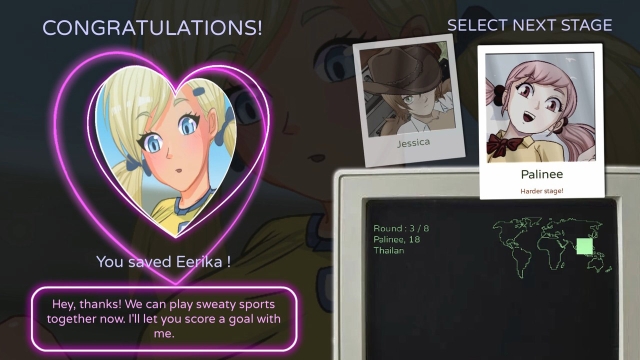 As a stage progresses, the lovely lady you're saving will lose more and more of her clothing. Around the time she's all but naked, a crudely named boss alien arrives on the scene. These guys utilize fairly simple attack patterns and have assistants of their own, so you have to move and blast with caution but shouldn't have too much trouble as long as most of your life meter remains full. Then you get a view of the damsel you have rescued, with her breasts prominently displayed in the event that you did a good job and are playing with censorship disabled.

Given the sort of game this is and the type of people it was theoretically designed to entertain, I'm not sure why the censored mode is even offered. Nudity is your reward for skilled performance, and probably even your primary reason to play. The artists responsible for stage backdrops weren't shy about drawing nipples, either (though they do hide other private bits with artfully placed objects, keeping everything comfortably M-rated). I can't imagine there's someone out there saying "Wow, I'd really like to play a game where you blast the clothes off provocatively posed anime women, but I'll be pretty upset if I see too much skin!" And I can't imagine a younger gamer convincingly saying "Mom, please buy me this game where you shoot the tops off women and I promise not to look at the nipples."

But I'm getting distracted. The point I'm making is that you get to advance through stages until your ship finally crashes and burns. Energy is refilled at the end of each stage, or when you grab some rare items (partially, in the case of the latter). There also are bombs, though they are more for prevention than giving you space to move on a screen you have already allowed to become riddled with shrapnel. You have to monitor your life meter and move carefully around a field of bullets that can get pretty busy. Things almost never reach the level of "bullet hell," however, and the pacing is sufficiently sedate that you can enjoy the ride even if you're not an expert. 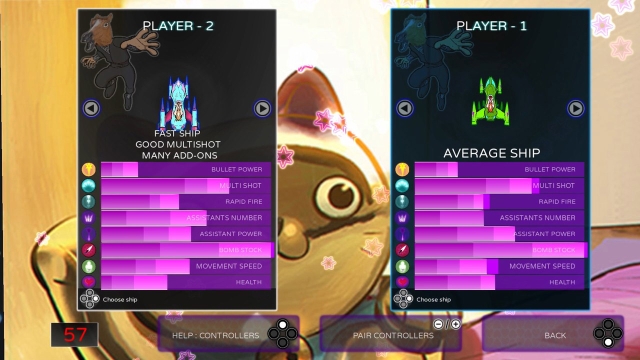 Ship selection starts out limited, but you can unlock additional craft that have additional assistants, or better attack power in exchange for weaker spread shot, or whatever. The starting ship is nicely balanced for the beginning player, but flying about with one of the others adds replay value to the whole affair. Each available option feels different enough to affect your chances of success and to reward varied play styles. One thing I do find unfortunate is the difficulty bump once you start playing Arcade mode, which features an additional eighth lady at the end. Reaching the end requires a lot more effort and smarter play, and the final stage is so full of bullets and more durable enemies that I can't seem to properly clear it. But I have some fun getting to that point and can't really knock it.

Another point worth some remarks is the one-finger mode, which must be unlocked like almost everything else in the game. You hold a finger on the screen and move it around while your bratwurst-shaped ship fires automatically on your behalf, or you can release your finger and quickly tap again to deploy a bomb. It works well enough that I was able to get right to the end of the campaign on my first attempt, but sometimes I had a hard time seeing where I was in relation to shrapnel and other ships because my finger was in the way. There's not really much to the mode, beyond that restriction. I think the idea is that you can play with one finger and do other things besides (wink, wink), but the on-screen action is a little too ambitious for such diversions to probably go anywhere unless maybe you are the Jason Biggs character from "American Pie."

Waifu Uncovered is a competent shooter with eight stages, several ships, unlockable art galleries and three modes of play that should keep horny gamers busy for a few hours or so. It's not ambitious enough to feel especially offensive, unique enough to feel truly novel (beyond the fact it's one of the earliest examples of nipples in a game distributed on Nintendo hardware), bad enough to feel disappointing or good enough to earn a hearty recommendation. It simply is what it is: a lewd shooter for people who like a little nudity with their alien invasions. If you fall into that camp, I have to imagine you could do worse.
2.5/5

If you enjoyed this Waifu Uncovered review, you're encouraged to discuss it with the author and with other members of the site's community. If you don't already have an HonestGamers account, you can sign up for one in a snap. Thank you for reading!

© 1998-2020 HonestGamers
None of the material contained within this site may be reproduced in any conceivable fashion without permission from the author(s) of said material. This site is not sponsored or endorsed by Nintendo, Sega, Sony, Microsoft, or any other such party. Waifu Uncovered is a registered trademark of its copyright holder. This site makes no claim to Waifu Uncovered, its characters, screenshots, artwork, music, or any intellectual property contained within. Opinions expressed on this site do not necessarily represent the opinion of site staff or sponsors. Staff and freelance reviews are typically written based on time spent with a retail review copy or review key for the game that is provided by its publisher.