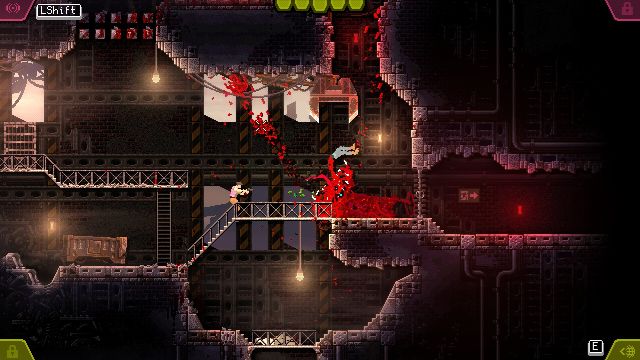 Carrion offers you a rare opportunity in the form of a familiar horror narrative. It features a group of scientists holed up in a research facility, where a horrific, potentially alien specimen has escaped its confinement and now runs amok through the complex's myriad halls and crawlspaces. Think of it as an interactive experience akin to "Alien" or "The Thing, with shades of "The Blob" and "The Abomination." Here's the twist, though: you don't control one of the ill-equipped, panic-stricken researchers. You are the monster.

You begin as a tiny, hungry lump of flesh that slithers its way through tight pipes and air ducts until it reaches its first, unsuspecting meal. At that point, you break into the room containing your human snack--easily guiding yourself with either the mouse or the controller--and chow down. A nerve-racking scream, a few cracks of splintering bones and some meaty squelches later, you've filled your beastly belly and grown considerably. With that goal fulfilled, you move onto your next objective: eat another person. Then another. Then another. Then another...

Soon, you become a writhing, red mass of tentacles, eyes and teeth, now clearly bent on leaving the outpost alive. Though you're a huge ball of insatiable hunger, you're not invincible and security is tight. So what do you do except scour the campus for other specimens to gobble up, thereby gaining their abilities. With those fancy new skills on board, you can shoot webs, crash through walls or form a shell capable of repelling otherwise fatal explosions. In other words, this is a "Metroidvania" title, except you're the metroid. 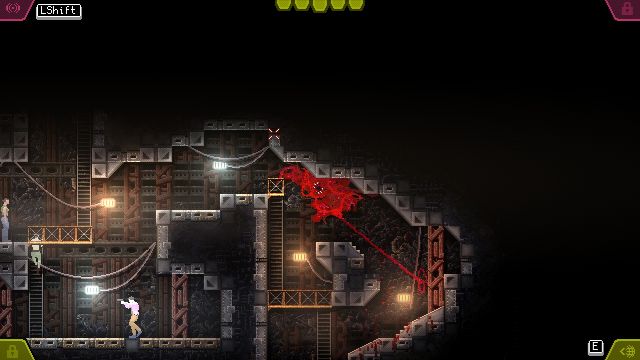 Naturally, the humans don't want you to escape. They may not have R.J. MacReady or Ellen Ripley on their staff, but they do have a lot of pistols, flamethrowers, weaponized drones, security bots and tiny mechs armed with high-powered machine guns. Each bullet or flame strips off a bit of your health and reduces your size. That's unfortunate, because the aforementioned skills each depend on your body mass, and you temporarily lose them as you take damage and shrink. That nifty keratin shield I mentioned earlier eventually vanishes, replaced by a cloaking trick that's not at all useful in combat. But hey, at least it helps you get past trip lasers...

Damage mitigation is imperative, because fights grow more troublesome when you're smaller. But how do you avoid bullets or flames when you're the size of a frickin' city bus? The devs at Phobia Studio must've asked this question themselves, and wisely designed each room with little details that work to your advantage. Each one has a small shaft, channel or hole you can access that shelters you. You can then wait until the coast is clear and try to quietly slither up behind your foes before gorging on them. However, these little nooks don't guarantee safety or success, and you will occasionally have to fight for your life regardless of nifty hiding spots. This is especially true about the drones I mentioned earlier, which have a knack for seeking you out and cornering you.

These well-designed chambers help in you other ways, too. For instance, loads of areas sport ducts with handy metal covers on them. You can easily rip these gratings off and throw them at the opposition with such force that it sometimes cuts the weakest among them in half. And yes, you can even go Super Mario Bros. 2 on these guys and hurl one human at another. Though that's not an effective strategy, it's certainly fun to watch. 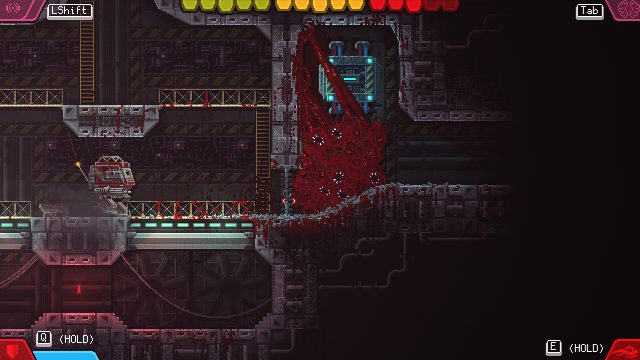 Predictably enough, when you aren't trying to find inventive ways to scotch all of the troops, you're solving switch-based puzzles. I know that sounds awful trite, but the mental challenges on offer here are actually well done. They're not overwhelming, but not so easy that you feel like you're just going through the motions. Some of them require you to temporarily shed your mass in a nearby pool so you can access an older ability, thereby allowing you to hit out of reach levers or smash wooden barriers later in the campaign. There's even a technique that allows you to take control of bystanders, thus forcing them to betray their friends or throw other switches for you. On top of that, some of the weaker folks will allow your entire body to burst from theirs, effectively teleporting you to their location and giving their coworkers one hell of a heart attack.

Several puzzles require you to backtrack to previous rooms after gaining new skills or throwing switches, and others hold optional secrets that can only be accessed later in the proceedings. This is fine and dandy, except the game provides you with no map whatsoever. I know, monsters don't carry maps around and examine them. I mean, you didn't see the Xenomorph bust out a blue print of the Nostromo and pore over it. Yet even realizing that, the lack of a map to remind you how to get back to previously visited areas remains irritating. 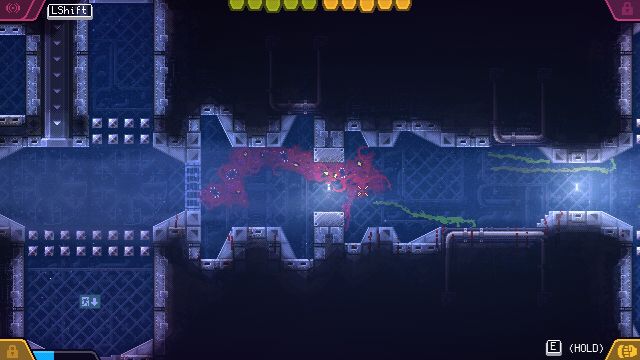 Thankfully, the game never gets to intolerably tricky, and even provides you with nice respites and cathartic scenes and features that allow you to blow off steam. Let's say a flamethrower-wielding guard gives you a hard time, and you want to exact some grisly revenge. Rather than the standard "chew him to death" move, you might consider slamming him against every surface in your vicinity. Or hell, you can chuck him like yesterday's garbage and laugh as he collides with rocky outcrops or plummets into a nearby pool and drowns. Remember, you're the villain here. You can be as vicious as you want, and that includes toying with your food a little bit.

You aren't going to find a long-winded narrative here, and a lot of the content is quite samey. Enter an area, consume, access another area, fight. Break into another room, throw switches... Yet, strangely, the rigmarole of consuming and growing never grows tiresome. On top of that, the campaign ends before it can overstay its welcome, and you exit with a full belly. Carrion is a terrific homage to sci-fi/horror films, especially the confined-space monster movies of yore. For once, it's nice to experience a piece like this and not have to worry about what might be lurking in the darkness.

If you enjoyed this Carrion review, you're encouraged to discuss it with the author and with other members of the site's community. If you don't already have an HonestGamers account, you can sign up for one in a snap. Thank you for reading!

© 1998-2020 HonestGamers
None of the material contained within this site may be reproduced in any conceivable fashion without permission from the author(s) of said material. This site is not sponsored or endorsed by Nintendo, Sega, Sony, Microsoft, or any other such party. Carrion is a registered trademark of its copyright holder. This site makes no claim to Carrion, its characters, screenshots, artwork, music, or any intellectual property contained within. Opinions expressed on this site do not necessarily represent the opinion of site staff or sponsors. Staff and freelance reviews are typically written based on time spent with a retail review copy or review key for the game that is provided by its publisher.