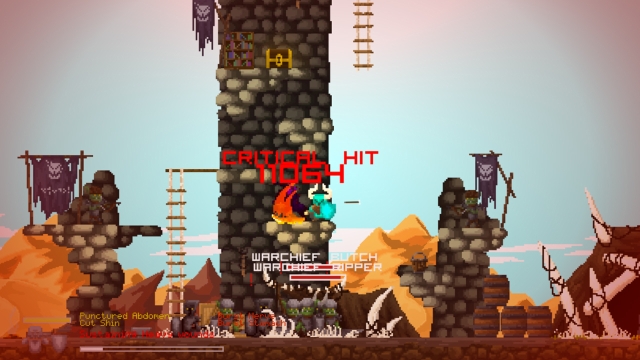 I can't stop playing this game.

Depending on how you read that statement, it's either a declaration of joy or a grim realization. The former is a case where a title whisks you away to a wonderful place where you leave your everyday woes behind. The latter is a situation where your enthusiasm for a game diminishes, but you still feel its your duty to advance the campaign or complete menial tasks or side quests. You become so used to playing that you stubbornly won't give up until you reach an ending or a satisfactory "quit point." You end up throwing away hours because you won't move on when you should.

My playthrough of the action-RPG Regions of Ruin falls into both of those categories...

At first it seems like a simple, addictive adventure. It eschews deep storytelling, mainly showing an opening cutscene to setup its world and outline its campaign. You take the role of a dwarf who seeks to revitalize his dying race, and accomplish this by building a new town and populating it with fellow dwarves. Since you can't reproduce asexually, you'll need to scour the land for imprisoned kinsmen and free them from the clutches of goblins, kobolds, orcs and undead, all of which dwell in various locations across the continent.

Here's the thing: you can't just mosey from your base of operations to the nearest orc settlement and start chopping. I know the game's marketplace page boasts an open world, but it's really not that open. In order to get around, you need to select a location on a map, and can only do so once it has been "discovered." In other words, you need to spend rations to reveal a shrouded portion of the continent, thereby unlocking any stages hidden under the fog. From there, you essentially fast travel to a spot and check out the situation there. Sometimes you'll find nothing but a quiet swath that maybe offers a side quest. Most of the time, though, you'll run afoul of the aforementioned forces, or even worse things like giant slugs or wargs. 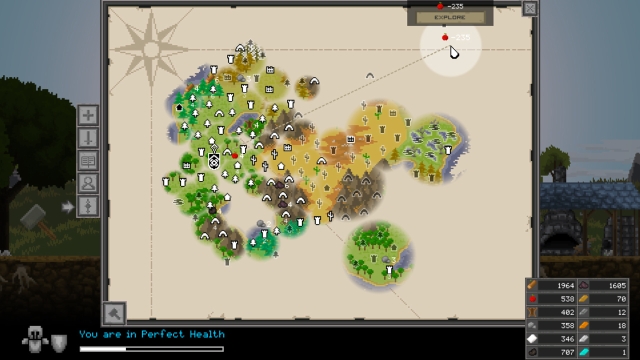 So you take on these hordes, using either quick strikes or heavy blows to subdue them while keeping an eye on their shields. If a foe raises his, you'd better hit him with heavy attacks, otherwise you'll get stunned and potentially swarmed. Luckily, you have one other means of offense at your disposal, and it's so effective that it's almost cheap. You carry an infinite supply of throwing axes with you, and each one only costs you a tiny amount of stamina. With a little bit of leveling and a few perks, you can lob these sub-weapons far and deal immense amounts of damage. Hell, a lot of times you can one-shot multiple foes with a single axe.

During my own playthrough, my standard strikes only dealt in the hundreds or thousands in regards to damage. My axes, on the other hand, regularly landed critical shots in the tens and hundreds of thousands. I felled many, many contingents using axes alone. Bear in mind that I was also able to throw them off-screen, and occasionally even vanquished bosses before I could see them.

After you forcefully evict your adversaries from a level, you can then start harvesting whatever resources that place has to offer. Thankfully, you don't need to nab these goods yourself, as you can assign some of your numerous liberated brethren to carry the stuff back to town a little at a time. More often than not, you'll find lumber or common minerals, but other places provide rarer ores, animal hides, rations or textiles. With these materials, you build your town by selecting various shops or services from a menu, and even upgrade them as you amass further goods. 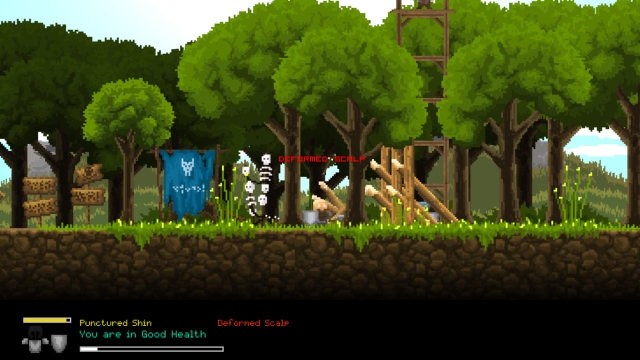 And that's what you do: kill monsters, collect building materials and develop your burg. For a while, this simple, task-oriented campaign remains almost zen-like. If you enjoy loads of busywork in your RPGs, then you'll probably dig this one. Personally, while I loved it for the first half of the campaign, its spell over me began to wane...

Regions of Ruin eventually becomes a tedious, repetitive journey. You enter a stage, annihilate your oppressors, harvest resources and move on to repeat the process again. Most of these levels are so straightforward that they come across as filler, consisting of only a straight line with the same goblin-themed structures all over the place. A handful of areas offer slightly more elaborate places to explore, but even then we're not talking anything grand or complex. You might find a few alternate routes to check out, either leading to treasure or dead ends. Ultimately, they do little to improve the experience.

On top of that, the over-powered axes allow you to steamroll most of the competition to the point that combat grows monotonous. The game attempts to remedy this issue by rolling out black goblins, which are faster and more powerful than their early-game cousins. If anything forces you to develop your town to its fullest, secure the best equipment and dump tons of money into dozens of healing potions, it's these guys. In other words, while it's cool that these beasts prompt you to improve, such improvements require you to take part in all of that laborious travel-kill-harvest-upgrade-travel again junk until you're strong or wealthy enough to survive their onslaught. 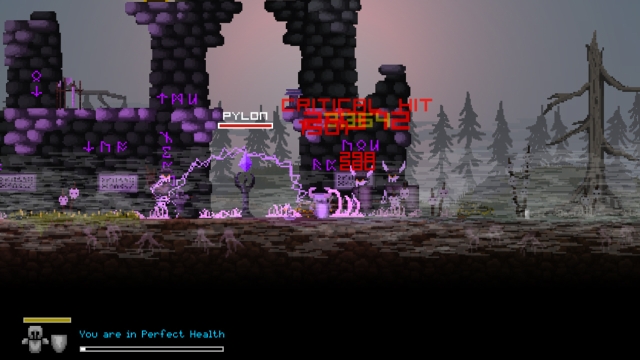 "I can't stop playing this game," I said to myself, because I'd devoted so much time to it that I may as well finish it. That and the thought of leaving whole portions of the map unexplored really bugged me. Hell, even when I found out that the main quest line only consisted of platforming situations and switch-based puzzles, I couldn't tear myself away. Each plot point brought me to a beacon to light, which I did so by either taking out yet another small band of orcs or going through a brief obstacle course. I wanted to see where those beacons would eventually lead me, and the destination turned out to be an anticlimax.

Regions of Ruin isn't a bad game by any stretch. It's actually quite addictive, but that's also its undoing. It presents you with enough material to hook you, but doesn't provide enough variety or fresh content to keep the ball rolling for its entirety. The whole "conquer lands to secure resources so you can build a town" thing only lasts so long, and would've been better utilized with more in-depth town-building mechanics. By the time you realize that there was only enough solid content for a decent first half, you've already committed to the experience. You end up with the choice of either reluctantly abandoning something to which you devoted time and effort or forcing yourself through an experience that overstayed its welcome.
2.5/5

If you enjoyed this Regions of Ruin review, you're encouraged to discuss it with the author and with other members of the site's community. If you don't already have an HonestGamers account, you can sign up for one in a snap. Thank you for reading!

© 1998-2020 HonestGamers
None of the material contained within this site may be reproduced in any conceivable fashion without permission from the author(s) of said material. This site is not sponsored or endorsed by Nintendo, Sega, Sony, Microsoft, or any other such party. Regions of Ruin is a registered trademark of its copyright holder. This site makes no claim to Regions of Ruin, its characters, screenshots, artwork, music, or any intellectual property contained within. Opinions expressed on this site do not necessarily represent the opinion of site staff or sponsors. Staff and freelance reviews are typically written based on time spent with a retail review copy or review key for the game that is provided by its publisher.