1994s Beneath a Steel Sky is a dystopian cyberpunk point-and-click thats a much bigger deal than you probably realise. Set in the awful future all dystopian cyberpunk scenarios have plotted for us, Robert Foster is an adopted citizen of the Gap, the new name for the new hell that has become the Australian outback. Hes kidnapped and strong-armed along to Union City where he has to try and undo the oppressive regime of tyrannical AI overlord, LINC (you see why that tagline is so clever now?). Foster eventually succeeds in dethroning LINC and, in lieu of taking command of the city himself, replaces the evil AI with one he built as a child. His AI, Joey, had been the comic relief throughout much of Beneath, a sassy, sarcastic foil to Fosters earnestness and, while the game ended with a hopeful vibe, the player was left to wonder if it really was the best choice to oversee the rebuilding of a broken city.

Curious people would have a hell of a wait on their hands. It would take over 25 years for Revolution Software to revisit Steel Sky off that back of a kickstarter goal not quite met when they were funding Broken Sword 5. Beyond a Steel Sky finds Foster has indeed returned to the Gap, living that nomad life. On the trail of robotic kidnappers snatching kids from villages, he reluctantly finds himself returning to Union City after a ten year hiatus. He finds the city seemingly thriving, its citizens clothed, fed and housed. Working state provided jobs, issued droids to clean their houses and cook their meals. Social status is regulated through QDos points, which reward the citizens who stay in line and offer demerits to those that dont. Union City is vibrant and alive, bustling and safe. The horror of the Gap kept firmly at bay by massive metal walls peppered with the occasional gun turret or two. They seem to exist to keep people out. You might start to suspect theyre just as prevalent at keeping people in. 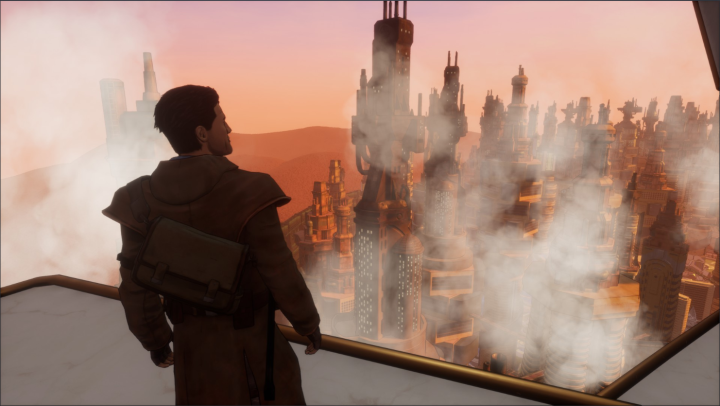 That theres something sinister about Union City is made clear very early on. Fosters accent into the city proper is ruthlessly anchored in delicious bureaucracy. As a filthy outworlder, he doesnt have the clearance to enter the city without first being chipped, which lets the city track his every movement. Even assuming he can bypass that, hes barred from entering the city at the entrance hes arrived at, because its an entry point for vehicles only. No pedestrians; rules are rules. Theres a gruesome solution in the ID of a dead man left rotting in the desert sun, but even hidden under the umbrella of citizenship, Union Citys waxen smile continues to feel false. The more youre required to burrow into the suspiciously pristine world, the more it seems ever so slightly wrong.

Case in point: lets talk about Spankles the clown.

On the face of things, hes an innocent mascot for a soft drink, which is routinely offered to the citizens for free. Youre never too far away from a Spankles vending machine and, so long as you let it read your chip, unlimited cans are yours for the taking. In the confines of Union City, Spankles seems to be a Very Big Deal. Banners are draped across walkways, asking you if youve enjoyed a Spankles recently. Holo-adverts flicker and change as you walk past them, asking you why youve not tried any of the new Spankles flavours yet. Your private messages included sponsored polls about what new tastes you want to drop into circulation. Its never pushed as part of the games narrative, but once you start noticing how hard the city wants you to drink nothing but Spankles, regularly and heavily, its impossible to stop noticing. You walk into a hip coffee bar, slices of cheesecake out on display and various syrups and lacquers lining the shelves behind an immaculate serving droid. But scan the service point to order a drink and its not a double espresso skinny latte with vanilla you might end up; its a Spankles. Youll notice countless rubbish containers filled with countless discarded Spankles cans. A machine designed to regulate your health will recommend Spankles as an unlikely remedy. Maybe its slogan is starting to feel just a little more ominous: Spankles - Explodes your mind!" 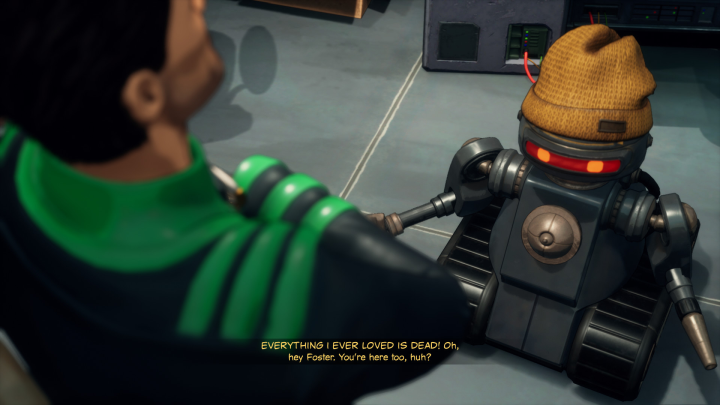 I started hacking every vending machine I saw, making them oft inoperable. I didnt need to, but it made me feel like I was fighting against something bigger than myself in the defence of the common man. Usually, rather than waging war against soft drink distributors, hacking forms the bulk of Fosters offense against Union Citys new world order. It lets you mess with various softwares goto commands, borrowing a prompt from here, or a direction from there and mashing it together into manipulative program code to suit your needs. It might be as simple as changing switching positive and negative commands around for example, a door is programmed not to upon while an alarm is triggered. Usually, this would mean finding a way to shut off the pesky alarm, but now you can take the command that lets the doors open with no alarm, and swap it with the active alarm function. The blaring alarm is now you ally, and your path is now clear.

Hacking becoming your (ahem) goto tool makes sense because of how heavily automated Union City is. But it does mean a shift away from the originals purely inventory based puzzling, making Beyond a third person adventure game in departure to Beneaths point-&-click roots. But rather than distance itself from its founding title, Beyond a Steel Sky does everything it can to celebrate it, with little Easter eggs, sly nods and returning characters. Some of these are obvious, and some much more sly; for example, though the game is set in Australia, the original games voice cast were all hired from North England, where the Revolution studios were located. Casually browse information consoles, and youll learn the founding fathers of Union City were imported from Hull, alongside building materials and steel. 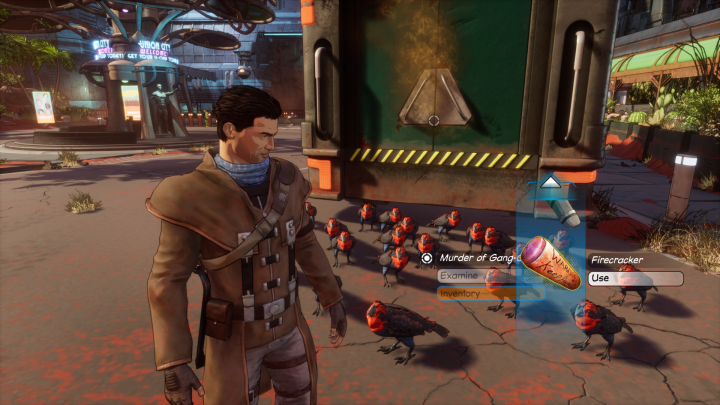 While these little nods are appreciated, its equally laudable that prior investment in the series is not required. Beyond a Steel Sky builds the city of tomorrow on the ashes of LINC and leaves you free to explore the new without the burden of prerequisite context. Its a sombre look at a possible future, while still making time to poke fun at itself. One minute, you could be dealing with the very real consequences of your identity theft; the man youre pretending to be had a life and a family and a position in a dystopian cityscape that you can bet has noticed his unexplained absence and sudden, random return. The next minute youre trying to outwit a stubborn Monty Python referencing security droid or throwing firecrackers at gatherings of angry birds.

Beyond a Steel Sky found itself Beneath a Large Shadow, but manages to emerge all the better for it.
4.5/5

If you enjoyed this Beyond a Steel Sky review, you're encouraged to discuss it with the author and with other members of the site's community. If you don't already have an HonestGamers account, you can sign up for one in a snap. Thank you for reading!

© 1998-2020 HonestGamers
None of the material contained within this site may be reproduced in any conceivable fashion without permission from the author(s) of said material. This site is not sponsored or endorsed by Nintendo, Sega, Sony, Microsoft, or any other such party. Beyond a Steel Sky is a registered trademark of its copyright holder. This site makes no claim to Beyond a Steel Sky, its characters, screenshots, artwork, music, or any intellectual property contained within. Opinions expressed on this site do not necessarily represent the opinion of site staff or sponsors. Staff and freelance reviews are typically written based on time spent with a retail review copy or review key for the game that is provided by its publisher.