Betray my age although it might, Im going to talk a little about a time when arcades were not only relevant, but booming. With home gaming in its infancy, arcade cabinets sat so far above the first few waves of consoles they had to peer through the clouds to see them. Though the hardware specs involved would be considered rudimentary at best today, there was a time when they were uncontested as gamings God tier. Consumers, in their quest to consume, arrived in their droves to sit at the adult table where they sacrificed small change and narrowly avoided fistfights with dirty line cutters.

During these years, WWF established a positive reputation based primarily upon one game, WWF Wrestlefest. Though not quite considered a super heavyweight of the arcade scene, like Double Dragon or Street Fighter 2, its ability to marry simple, clean controls with a grapple-based combat that was sorely underrepresented has cemented it as a staple in many childhood memories. Accommodating an impressive 4 player co-op allowed friends to duke it out in either competing tag teams or during an all-versus-all battle royal. Developers, Technōs, had beat-em-up pedigree, being the upstart team behind Renegade and Double Dragon, but also boasted a smattering of lesser-known wrestling-based games. Their experience paid off. Wrestlefest wasnt just a reskinned brawler; it invested in the colourful larger-than-life WWF of the time but treated the premises with reverence, allowing players to trade bodyslams, suplexes and running clotheslines.

Technōs were too pure for this world, and would close their doors not long after Wrestlefest was wheeled out to an appreciative audience, and it took WWF almost five years to find another company they trusted enough to continue their legacy. They settled on Midway, a more recent arcade serial success story, boasting the likes of NBA JAM and Mortal Kombat in their portfolio. Like Technōs before them, they went all in on the cartoonish aspect of pro wrestling. Only, WWF wasnt that company anymore, doing away with exaggerated watershed heroism and taking the first few unsteady steps towards the edgier Attitude era that would see their boom years. It was in uneasy transition, no longer centred on immortal muscle-mountain patriot, Hulk Hogan and more on muscle-mountain patriot flop, Lex Luger technical genius Bret Hart, showman Shawn Michaels , or darker characters like magical giant wrestling zombie, The Undertaker, or Tony Montana cosplayer, Razor Ramon. 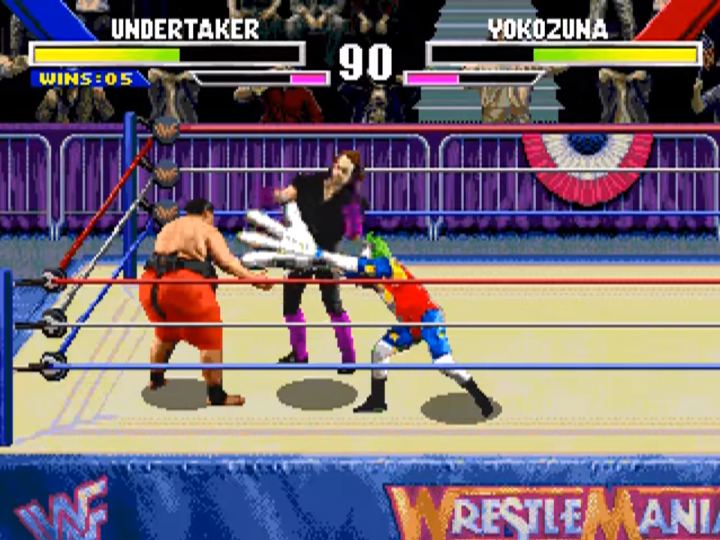 Very much unlike Technōs, Midway showed considerably less respect for the wrestling part of pro wrestling. They turned the unimaginatively named WWF WrestleMania: The Arcade Game into a kid friendly Mortal Kombat copy and paste, removing the likes of Sonia Blade and replacing her with angry carney, Doink the Clown, and villainous sumo wrestler, Yokozuna. The entire project is a blatant reskin fluttering their eyes at the generation least targeted (but certainly most interested) in pulling out the still beating hearts of defeated opponents. No, none of that gory nonsense for WWF WrestleMania: The Arcade Game; just good clean fun. Though the basic engine and many staple moves from Mortal Kombat were openly left for all to see in the finished product, some of the more adult staples needed toning down. For example, rather than bleed blood, Lex Luger bled little cartoon dumbbells (cuz hes super strong!); Bret Hart bled adorable love hearts (his last name is Hart, you see!). Yokozuna bled salt and fish. I choose not to unpack that one.

Sometimes, though, Midway did remember they were supposed to be making a wrestling game, and their limited efforts to communicate this often serve as WWF WrestleMania: The Arcade Games sporadic highlights. Rather than just have you exist on the 2D linear platform Mortal Kombat combatants are forced to exist on, youre offered free reign of the wrestling ring. You can run the ropes or climb the turnbuckles, and, even its little more that the MKs throw mechanic with a few extra steps, theres limited grapping to be had. The biggest boon, though, is that with all this extra room to roam around in, the ring can be filled with up to four wrestlers which, while advertising the shallowness of the games eight man roster, is the biggest argument against this being just a tourney fighter dressed up on spandex pants.

Itll ruin that, though. Pin attempts are automatically triggered once health bars are emptied, but theres no ref to count them down and no three count to try and beat. Winning and losing is strictly governed by one-on-one fighter procedure. So instead of trading body slams and trying to escape figure four leg locks, youll mostly swap ridiculous blows that turn the cartoonish nature all the way up to overkill. Bam Bam Bigelows fists will randomly catch on fire, for example, or heavy blows from Razor Ramon have his arms morph into literal razors. Doink will magically summon comically oversized mallets from nowhere while The Undertaker will beckon a small family of creepy bats from the prone body of beaten foes.

Here he is summoning the dead and shooting otherworldly spirits from the beyond. Vintage Undertaker! 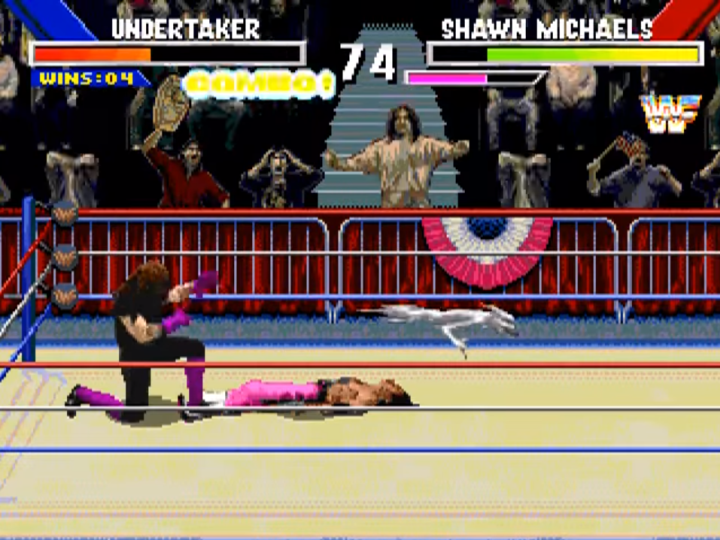 There wont even be an exciting twist ending this time, where I talk about how the plucky 32X version that no one bought somehow manages to be the best home port of a bad game. Its not; its effortlessly outperformed on every conceivable level by the more powerful Playstation and Saturn while being considerably better than both the Mega Drive and SNES strain. Both the 16bit consoles suffer from noticeable slow down, while the SNES has to limit its on screen wrestler count to three. None of that for the 32X, which allows the four wrestler cap without issue and performs just fine. I cant even blame the 32X for the home version having no extended roster or extra game modes, because that lack of attention is present in even the superior 32bit ports. Maybe if it has fleshed out the foundations, it could have at least pretended to be a game about wrestling, but its far too easy for Midways barely there disguise to slip and fail right when its needed the most. Wrestlemania? More like Wrestle-LAME-ia!

If you enjoyed this WWF Wrestlemania: The Arcade Game review, you're encouraged to discuss it with the author and with other members of the site's community. If you don't already have an HonestGamers account, you can sign up for one in a snap. Thank you for reading!

© 1998-2020 HonestGamers
None of the material contained within this site may be reproduced in any conceivable fashion without permission from the author(s) of said material. This site is not sponsored or endorsed by Nintendo, Sega, Sony, Microsoft, or any other such party. WWF Wrestlemania: The Arcade Game is a registered trademark of its copyright holder. This site makes no claim to WWF Wrestlemania: The Arcade Game, its characters, screenshots, artwork, music, or any intellectual property contained within. Opinions expressed on this site do not necessarily represent the opinion of site staff or sponsors. Staff and freelance reviews are typically written based on time spent with a retail review copy or review key for the game that is provided by its publisher.