When I started my lifetime of gaming with the Atari 2600, one of the many cartridges I owned was Defender. While that arcade port wasn't one of my favorites, I did play it enough to still remember the basics. You flew over a city during an alien invasion and shot the hell out of anything that moved while trying to keep the handful of people still remaining safe from abduction. Occasionally, alien ships would try to pick one up and take the unlucky chap to the top of the screen, forcing you to gun the ship down, pick up the now-falling person and return him or her safely to the bottom of the screen. It was a neat concept, even if my system didn't exactly have the best port of the game. Most shooters throughout history haven't exactly been huge on making players multi-task, putting the focus on destroying stuff while trying to avoid that same fate, so it's kind of cool that one of the oldest games in the genre put such an emphasis on protecting others.

Resogun, released for the PlayStation 4 in 2013, could easily be described as a modern re-imagining of Defender. Created by Finnish company Housemarque and released by Sony, this game provides some fun arcade action that will leave a person wanting more. 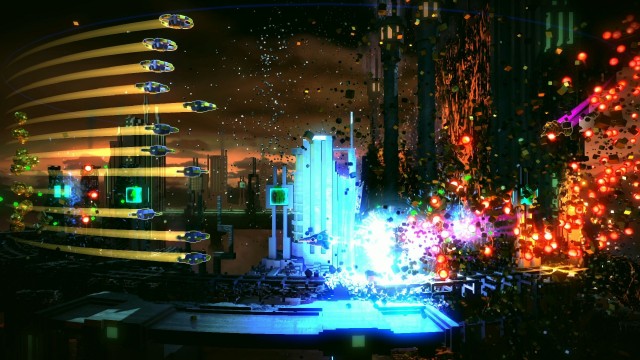 Really, when thinking of my issues with Resogun, first on the agenda is the whole "wanting more" thing. This is not a particularly long or varied game. There are five levels, each divided into three phases of enemy attacks, with the final phase culminating in a boss fight. Each phase takes place in front of some sort of futuristic city or fortress, with there only being minor aesthetic differences. Combat also is pretty simple. You have one form of gun attack that can slowly be powered up by collecting icons as you progress through the game. To give your ship a bit of diversity, you'll get a limited number of bombs, as well as two special attacks that can be used semi-regularly. Charge up your overdrive and you'll be able to temporarily slow down time greatly, allowing you to carve through now-helpless enemies with impunity. On the other hand, your boost attack gives your ship super-speed and allows it to destroy foes via collision for a few moments. The game provides three different ships to choose from, with one being balanced and each of the others focusing more on strengthening one of those other attacks. Or you can create your own ship and balance its stats however you see fit.

And that's about it. After finishing those five stages, you'll be able to tackle them again on other difficulty levels and take part in weekly challenges in order to earn experience points for your profile. Get enough experience, either via these challenges or by accomplishing various in-game feats, and you'll slowly unlock a slew of special challenge modes. The first of which, also known as "the only one I unlocked in beating the game and playing around with it a bit more", is a mode where every group of enemies drops a human and you're charged with saving as many as possible before losing a life.

In other words, an altered version of the base game that'll be a fun diversion if you're completely hooked by the Resogun experience, but something that won't probably wouldn't induce a player to want to spend hours with the game in order to obtain. While that particular challenge was easy to unlock, you have to gain a lot of levels to get all of them and, unless there's a sneaky way to obtain that experience quickly, it'll take a hell of a lot of time to experience everything. Time spent playing through and doing challenges in the same five similar-looking levels. I mean, there are a couple extra modes that can be purchased as DLC to add additional play value, but I downloaded this one via PlayStation Now and when I bought my subscription to that, I set one hard-and-fast rule: Since I'm paying to access all these games, I'm not throwing more money to obtain DLC unless I'm so in love with what I'm playing that I can't bear the thought of not getting the full experience.

Resogun didn't quite reach that level, although it was a lot of fun. For essentially being a modernized version of a classic arcade game, there is a nice bit of strategy involved. Your main form of firepower starts out pretty puny and, even if you max it out, those guns will never develop into something that can easily carry you the opposition -- at least on the harder difficulties. At times, you'll be forced to contend with massive walls of weak enemies, while mobile cannons are creeping across the ground. Or you'll shoot a few particular foes to release a human. You'll need to swoop down to pick the hapless person up to taxi him or her to one of each level's two rescue stations. And, just your luck, the game decided that was the perfect time to send out a horde of particularly aggressive foes! 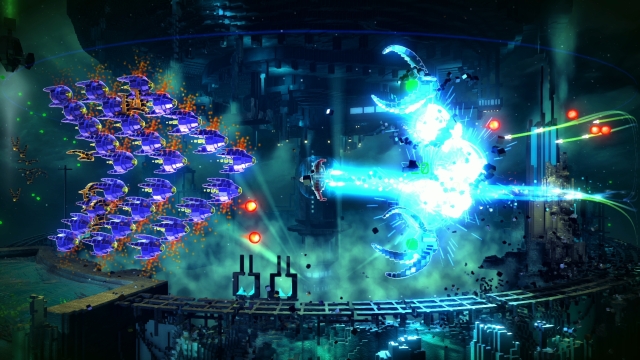 At times like those, merely using your basic single- or double-shot is just asking to be overwhelmed. But with only limited bombs and needing to wait for other attacks to charge, you can't be wasteful. Use those special abilities to get out of a tricky, but non-emergency situation or two and you might not have them available when things really get hectic. Timing is everything in Resogun, whether it be rescuing humans before those aliens realize one of them is blundering around, far removed from safety, or simply knowing the right times to utilize your heavy-hitting moves.

Resogun didn't really provide enough content for me to wholeheartedly recommend it -- unless you have PlayStation Now and are able to grab it for free -- but it is an enjoyable game that did intrigue me as to the possibilities. Growing up, I played tons of classic arcade ports and had a great time, but gravitated away from them when video games started getting more complex than "stay alive and score points until you can't". If this game can establish itself as a modern take on Defender, able to convey its basic gameplay while building upon it to create something larger and more impressive, it makes me think. How cool it would be if more of those games I played as a child got this sort of treatment. How much fun I'd have revisiting that youth through fancy, newer takes on those classics. It'd be the solution to alleviating boredom on more than one rainy day! Even if I found this game more a fun diversion than something I'd want to work at and unlock all of its challenges, it did provide its fair share of entertainment and more than warranted the hours I did dedicate to it.
3.5/5

If you enjoyed this Resogun review, you're encouraged to discuss it with the author and with other members of the site's community. If you don't already have an HonestGamers account, you can sign up for one in a snap. Thank you for reading!

© 1998-2020 HonestGamers
None of the material contained within this site may be reproduced in any conceivable fashion without permission from the author(s) of said material. This site is not sponsored or endorsed by Nintendo, Sega, Sony, Microsoft, or any other such party. Resogun is a registered trademark of its copyright holder. This site makes no claim to Resogun, its characters, screenshots, artwork, music, or any intellectual property contained within. Opinions expressed on this site do not necessarily represent the opinion of site staff or sponsors. Staff and freelance reviews are typically written based on time spent with a retail review copy or review key for the game that is provided by its publisher.