Theres very little definite about Inside, which makes this whole write about it lark particularly difficult. Theres a very dystopian vibe going on, but, because the entire world exists in a complete void of exposition, every last drop of it is left completely up to the player to interpret as they see fit. Theres no library of convenient notes littered around, slowly spelling out the fate of the fragmented world around you. No death rattle monologues offered by dying foes, keen to confess their myriad sins. Theres no deep lore dive introduction cinematic; theres no introduction at all. A boy appears at the edge of a forest. Shortly after you assume control of him, your actions get him horrifically killed.

Graphically mauled by an attack dog is the odds on favourite first death, though you could be throttled by a patrolling security guard, or drowned in an underground lake after flinging yourself off a small cliff. In sudden, urgent context, theres little reason to initially wonder why youre being hunted and who the people so urgently searching for you are because base survival is a far more pressing priority. Youll need to silently surge through checkpoints, slink through the shadows of long-abandoned vehicles, avoid stumbling on the overgrowth during desperate flights from danger. Fling yourself from cliffs. Not immediately drown after flinging yourself from a cliff. 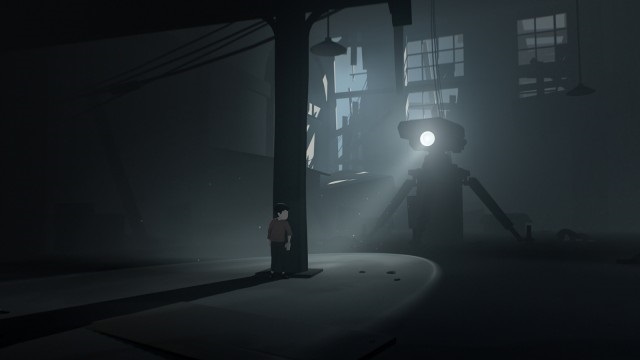 But little details from the world around you will creep in, regardless. A truck filled with unusually compliant prisoners is one of the first obstacles you have to bypass. Theres little gatherings of dubious metal pods strewn around scattershot; they seem to be what the people with the bone-white masks are guarding. They house a single porthole window which is aglow with an eerie light, but loiter around them too long, and the guards switch their focus to you. Death usually follows.

Death is definite and frequent, and is perhaps the only thing you can fully rely upon throughout Inside. Dealing in hard facts, all youd really be able to say about the game is Boy walks to the right; dies horrifically, because if youre not taken in by the broken world around you, all you have left it a peculiarly morbid obstacle run. Youre trapped a disturbing corridor lined with appalling and inventive ways to murder a small child that soon make your time in the forest seem jaunty and innocent.

Run to the right, and the woodland will lead to an abandoned farm, littered with the rotting corpses of its former livestock. Theres very little left alive and what does remain is peculiar. Theres questions to be asked, but you have no answers, so you run to the right. A dilapidated basement is home to a number of prone figures attached to coiled wires. They lay motionless on the floor until you restore power to the building when its clear the wires are live with electricity. Some twitch erratically; some are beyond even that, but youll join them in short order if youre careless enough to be spotted in a roving spotlight scanning the grounds. Who are these people? Were they trying to escape, like you are? Escape from who? Escape to where? You can never know, so you move to the right. 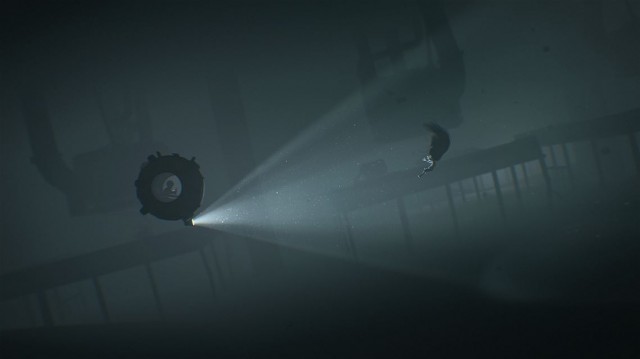 Abandoned warehouses are manned by forgotten workers, misshapen and lumpy; not quite human. Find the right tools and you can manipulate them to suit your needs. Lifting objects too heavy for you; hoisting you up to heights you wouldnt otherwise reach. What they are, who they are, what they were is never answered; they just exist and, if you want to move on, you make use of them. Steal further into the complex and youll discover complete sections flooded; lost buildings in their entirety claimed by seemingly bottomless water. Though forced to submerge yourself for uncomfortable lengths of time, you can forge steady progress, hidden away from the gaze of your pursuers. The depths are overlooked, but not quite uninhibited. A small, pale girl chases you with almost reckless desperation, a black mane of hair whipping around her in the waters current. What drives her despairing pursuit? How did she come to be here? How is she able to survive? Youll never know.

Manage to finish Inside, and the big ending usually employed to tie up all the plot threads instead celebrates in supplying even more questions. In a single, panicked moment the nature of the adventure is irreversibly changed, and youre left to either revel or despair in the corresponding carnage. Wrapped up in Playdeads dangerous obsession at presenting a complete void of explanation, invested players are left reeling, their headcanon theories either bolstered or obliterated. For everyone else, youve finally found a means to move all the way to the right.
4/5

If you enjoyed this Inside review, you're encouraged to discuss it with the author and with other members of the site's community. If you don't already have an HonestGamers account, you can sign up for one in a snap. Thank you for reading!

© 1998-2020 HonestGamers
None of the material contained within this site may be reproduced in any conceivable fashion without permission from the author(s) of said material. This site is not sponsored or endorsed by Nintendo, Sega, Sony, Microsoft, or any other such party. Inside is a registered trademark of its copyright holder. This site makes no claim to Inside, its characters, screenshots, artwork, music, or any intellectual property contained within. Opinions expressed on this site do not necessarily represent the opinion of site staff or sponsors. Staff and freelance reviews are typically written based on time spent with a retail review copy or review key for the game that is provided by its publisher.