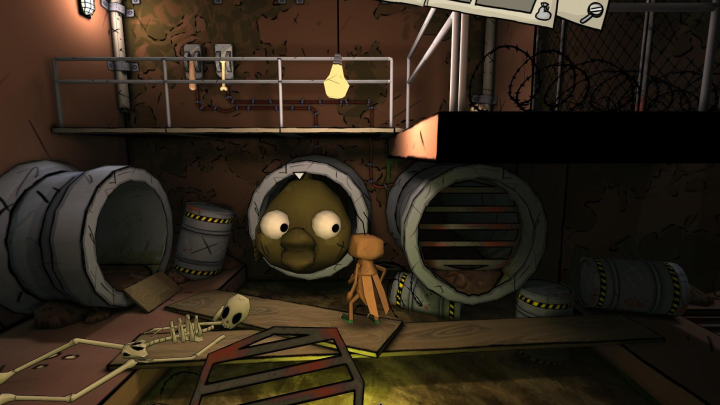 On the assumption that humanity survives the hotbed of god-awful that is 2020 and is instead wiped out via a nuclear Armageddon, commonly held belief is that the cockroaches will inherit the now slightly glowing world. Thus sets the stage for Journey of a Roach, a barren planet now inhabited only by insects and bugs. Without the interference of pesky humans, insectkind has built an underground life for themselves somewhat similar to a society, complete with a hierarchy and hints of recent conflict. The ants seem to be the victor, and impose near fascist rule over the rest of the populace. It doesnt seem to affect Jim, though; a laid-back cockroach whos most pressing concern is babysitting a fellow roach, Bud, as they roll through a collection of lumbering disasters. To the games credit, Jims not just a cockroach for show, and a lot of the games progression will centre on his ability to screw over gravity, and walk along walls and ceilings which lets you tackle problems, literally, from different angles. Its almost impressive, then, with this adventuresome new approach and interesting setting, that Journey of a Roach manages to feel as bland as it does.

Maybe its down to the games brief lifespan; clocking in at about two hours, not a lot of time is given to establish the new world order of semi-sentient creepy crawlies. Some of this is appreciated. Theres no real need to perform a deep lore dive into the why and hows of the insect world; that it exists is interesting enough and, if built around correctly, the absence of encyclopaedic explanation could be considered more of a boon. Journey of a Roach, however, is more concerned with being a loony and off-the-wall zany adventure where Joes progress through the world is strictly governed by Buds clumsy failings, forcing him to delve deeper into the subterranean suburbia because the ungainly git has plummeted through several floors. 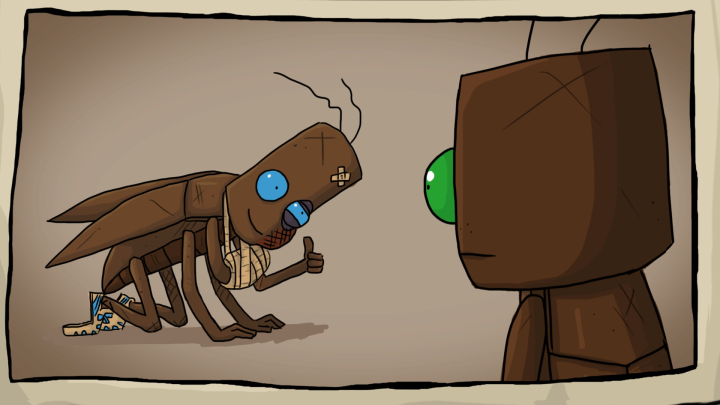 As a result, the game has a meandering lack of focus attached to it, containing no real narrative to drive you forward. Its all just a madcap chain of coincidences that fail to help establish either the world or the characters within them. You might foster some sympathy for Jim and his never ending quest to right his moronic friends bumbling, but his own ridiculous choices often coat him in a similar light. Yes, this is an adventure game so it could be easily argued that the ludicrous leaps of logic routinely asked of you are founded in the genre rather than the title, but its not so much the puzzles or unlikely solutions that resign you, but the characters decisions. The big finale to the game is this weird juxtaposition of deus ex machina and randomness for the sake of randomness that it further devalues a tale already somewhat lacking in value.

Considering the fleeting runtime, I should have seen Journey of a Roach off in a single sitting but, by around the halfway mark, the forced humour and constant pratfalls had conspired enough to derail my interest. Its annoying, because there are good ideas included throughout  original ideas, no less, which is impressive in a genre as long established as adventure games. But so much of it feels squandered. Being able to turn walls and ceilings into floors had a lot of potential, but is mainly used as a way to gain items in order to solve puzzles rather than be a keystone to the puzzles themselves. Lacking a common language, the bugs communicate through pictograms. But theyre often infuriatingly vague or, worse, confusingly irrelevant. Roach is never likely to be considered a difficult game, but its inability to always communicate clearly causes it unnecessary delays. Also of note is, while the game nails Jims ability to make everything his new floor, simple actions like the use of your inventory is made weirdly complex. 3D navigation of the world should have been the tricky bit to execute; inventory management was nailed back in the early 90s. It doesnt need a laborious reinvention.

Scuttling through to the endgame will probably hinge more on a sense of completion than anything else. The irrelevant humour struggles to land and the aimless journey ambles ever onwards, despite its brevity. Its hard to retain interest, and I doubt anyone would really blame you if you just bugged out.
2/5

If you enjoyed this Journey of a Roach review, you're encouraged to discuss it with the author and with other members of the site's community. If you don't already have an HonestGamers account, you can sign up for one in a snap. Thank you for reading!

© 1998-2020 HonestGamers
None of the material contained within this site may be reproduced in any conceivable fashion without permission from the author(s) of said material. This site is not sponsored or endorsed by Nintendo, Sega, Sony, Microsoft, or any other such party. Journey of a Roach is a registered trademark of its copyright holder. This site makes no claim to Journey of a Roach, its characters, screenshots, artwork, music, or any intellectual property contained within. Opinions expressed on this site do not necessarily represent the opinion of site staff or sponsors. Staff and freelance reviews are typically written based on time spent with a retail review copy or review key for the game that is provided by its publisher.