Besides playing host to most new indie games that are also hitting PlayStation 4 and Xbox One, the Nintendo Switch frequently snags ports of PC games that arrived on the scene during the last decade or thereabouts. That means the periodic addition of bona fide classics and--even more often--random oddities that publishers and developers believe can benefit from a second chance at stardom. Turmoil, a port of a mid-2016 release from developer Gamious, falls into the latter category.

Turmoil defies convenient genre classification. Your goal, as one of four available characters, is to amass a fortune by drilling for oil in the fertile lands surrounding a small frontier town where you have settled. It's sort of a simulation game, except the process of acquiring the precious black gold more closely resembles an action/puzzle game. The gameplay loop goes like this: you buy a plot of land while competing against three other bidders, you stock up on supplies and you head out into the wilds for a period of up to one year. There, you drill like crazy, hoping to find and drain pockets of crude without running out of resources. 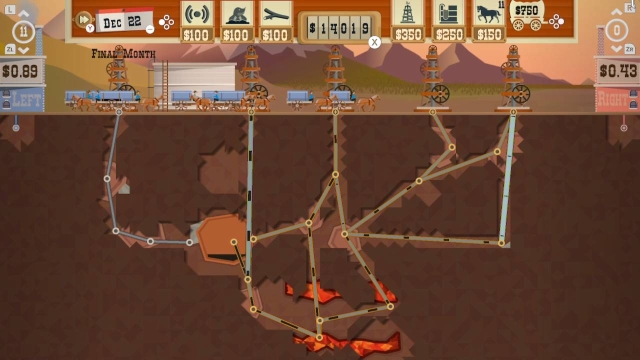 At first, things are simple. Tutorial messages walk you through the process of prospecting for oil, which begins as you arrive in the field. There are two warehouses, one on the left center of the screen and one to the right. The merchants within them will purchase your oil once you barrel it in any refineries you construct, but the price offered per barrel tends to fluctuate. That means you need to be careful to carefully monitor the supply chain you create.

Before you can even tend to such lofty affairs, of course, there's the matter of figuring out where the oil even is. You can hire someone to dowse the ground and that might give you some idea, or you can just start drilling and hope for the best. Every action you take costs virtual currency, however, and you start a stage with only $2,000 at your disposal. It's easy to blow through that money in a hurry, and then you're stuck borrowing from the banker (who charges interest that comes out of your tally at the end of the stage). Therefore, you have to be careful about how you proceed while also making sure to do everything quickly; the clock is ticking. 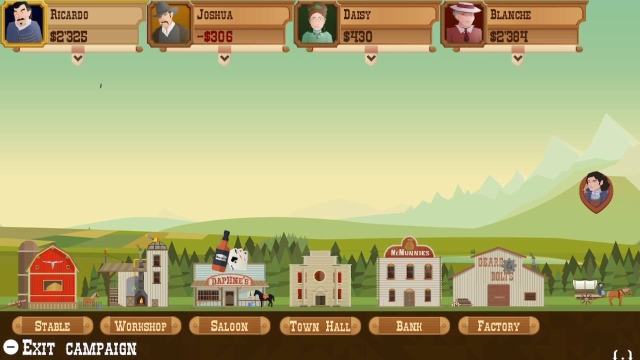 Resource management games can be hit-or-miss, and Turmoil is mostly a success. It smartly introduces new hurdles to overcome as you progress, such as rock barriers and deposits of natural gas. Additionally, you can purchase permanent upgrades in town that enhance your performance. For example, you might increase the total number of horses and carts you can deploy, or give your dowsers a sense of urgency, or strengthen your drill so it burrows more quickly. Making choices and seeing your tools grow more adequate is quite enjoyable at first, but eventually you realize that a lot of the tweaks aren't nearly as useful as they sound like they ought to be. And the best equipment, a "scan" tool that lets you reveal large hunks of soil at once, is so capable that using it almost feels like cheating. There's not a lot of in between.

One thing I also didn't like was how good the game is at draining most of your money the minute you return to town. As you get deeper into the campaign, it's hard to put together enough resources to keep improving your gear because you have to purchase perks and premium land to come out ahead of your AI rivals. Some additional objectives also come along near the halfway point, which I won't spoil here. They do a terrific job of eating up large piles of money, in the event you even manage to acquire that money in the first place. This puts you on edge, because it means if you fail a single stage too badly, that's the end for you. I did get through the whole campaign on my first attempt without seeing the "Game Over" screen, but there were times I came close to failure. I would have hated to start over from the beginning, and yet that probably would have done me some favors since maybe I could have set myself up better from the beginning. 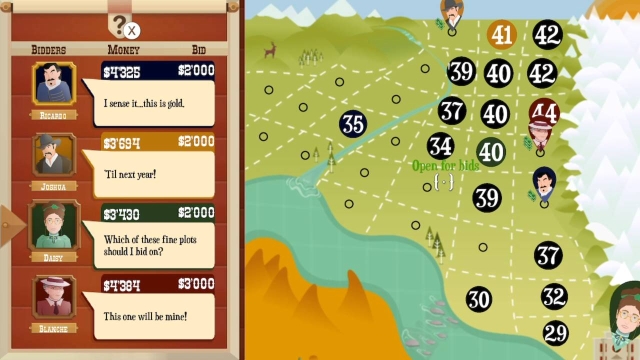 Eventually, I stumbled across some strategies that consistently got me through the stages that make up the game's second half. As I got smarter about what perks I paid for no matter what, and which tools I developed and which ones I ignored, I fell into a comfortable groove. I suppose that's to the game's credit, but I do wish it rewarded a wider variety of strategies. Whenever I tried to experiment and switch things up a bit, I only managed to set myself up for failure.

As I said near the start of this review, Turmoil is difficult to sum up with convenient genre labels. Describing how it plays without sounding like a whiner is also a bit rough (as you might have noticed), but I do want to stress that I actually enjoyed myself quite a bit as I played. That was true particularly before the repetition set in and everything became a bit too routine. The game never manages to offer the sort of experience I'm likely to remember vividly a few months from now, but it is a delightful and fairly unique way to pass eight or ten hours when you're the mood for something a little different. If you missed it the first time around, give it a look now. You might be glad its publisher decided to give it a second chance.
3.5/5

If you enjoyed this Turmoil review, you're encouraged to discuss it with the author and with other members of the site's community. If you don't already have an HonestGamers account, you can sign up for one in a snap. Thank you for reading!

© 1998-2021 HonestGamers
None of the material contained within this site may be reproduced in any conceivable fashion without permission from the author(s) of said material. This site is not sponsored or endorsed by Nintendo, Sega, Sony, Microsoft, or any other such party. Turmoil is a registered trademark of its copyright holder. This site makes no claim to Turmoil, its characters, screenshots, artwork, music, or any intellectual property contained within. Opinions expressed on this site do not necessarily represent the opinion of site staff or sponsors. Staff and freelance reviews are typically written based on time spent with a retail review copy or review key for the game that is provided by its publisher.