Ether Vapor starts off with a lone ship cutting through a wispy cloud formation, way above what seems to be an endless stretch of pure blue ocean. A few expository enemy ships start to trickle down from the top of the screen, but you know what to do, and you blast them from the skies. Thatll teach them to exist. Youll find, with some experimentation, that theres three distinct bullet formations you can switch between at any time; an obligatory forward stream designed to plough everything into targets dumb enough to sit right in front of you, and an equally obligatory angled fire that coats most of the screen in bullets. Much like genre architects, R-Type, both these modes of fire have an overcharge function which you can power up by holding down the button for a second. The third option gives you limited access to your nose cannon, but releases flurries of homing missiles which either chase enemies around the screen, or lock on to incoming threats currently outside your range, chilling with impure intentions in the background.

The rest of the stage follows suit. Theres plenty of targets with enemy fighters rolling on screen to launch bevies of rockets which curve about the sky looking for you. Your first real test comes when a craft three times your size ascends through the clouds, filling the screen with pulsing pink plasma bullets, but its no lasting match for your trifecta of offence, and should go down with a few seconds of pummeling. Youll settle into the routine of pretty standard vertical shooting, before your perspective is momentarily flipped by an unrelenting maelstrom of homing missiles. Here, autopilot kicks in while you control a reticle tied into your homing attacks in an effort to blow them out of the sky before they take you down. Except they wont, even if you do nothing. Shooting down missiles is a bonus stage existing merely for the consumption of delicious bonus points. Soon, this is over, and the end of level boss arrives, complete with dangerous WARNING, er, warnings. Electricity crackles around the screen and a massive grey slab of a ship warps in from nowhere. It pelts you with starbursting mortar attacks, columns of machine gun fire and a huge laser cannon that sweeps across the screen. Itll go down quick. Scene one should be seen off in about three minutes. At this point, youll likely consider Ether Vapor closer to Ether Vapid. A decent looking shooter without much challenge to it; a light distraction at best. 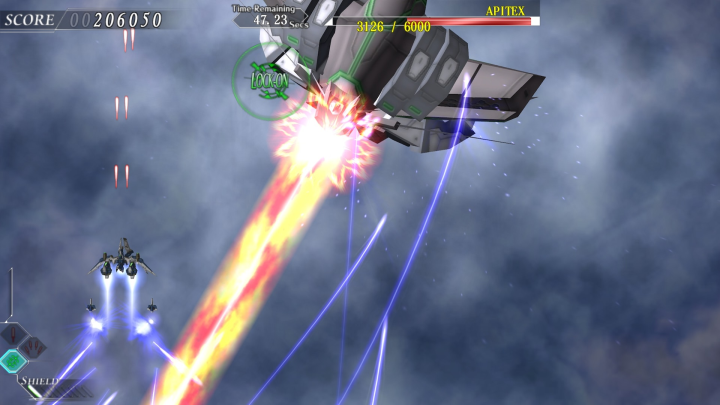 With your initial victory in hand, your ship banks hard and breaks through the clouds. Now skimming across the ocean itself, it presents the first of many surprises; it abandons its vertical perspective and switches to horizontal. Cool, thinks you, thatll mix things up a bit, as you scythe down more cannon fodder near effortlessly. Just because theyre viewed from the side rather than overhead doesnt make the same smattering of fighters any harder to explode, so you get on with that. I mean, sure, the screens a bit busier now and theres less room to safely maneuver in, but it shouldnt be a problem. You know what youre doing.

Soon a Gundam-looking mech swoops in. It looks like a big deal, complete with its own HP bar and intimidating name. LIBELLULIUM, though, is toothless. His attacks are flashy, but massively telegraphed and easy to avoid. Damage him enough and hell make a break for it, leaving you again with his legions of canon fodder. Theyve got a few new tricks, like sturdy weapons platforms that spit out unforgiving waves of tracer fire, but you can find little bubbles of safety without much issue, and everything goes down in flames. LIBELLULIUM even comes back near the end like a buffoon; the biggest threat he possesses is that, when you finally kill him, he explodes into rubble you need to avoid. Then WARNING flashes across the screen once more.

ARCHELON, at least, looks the part; a hulking mech made from impenetrable-looking armour and a cannon arm that dwarfs your ship some four times over. Hell fire the cannon, eventually, after releasing a few waves of plasma orbs and homing missiles you should slip past with no issue. When the cannon is fired, its anticlimactic. It slips in behind you, and you only have the entire bottom third of the screen as a safe haven. You scoff. It seems like a scoff worthy moment. 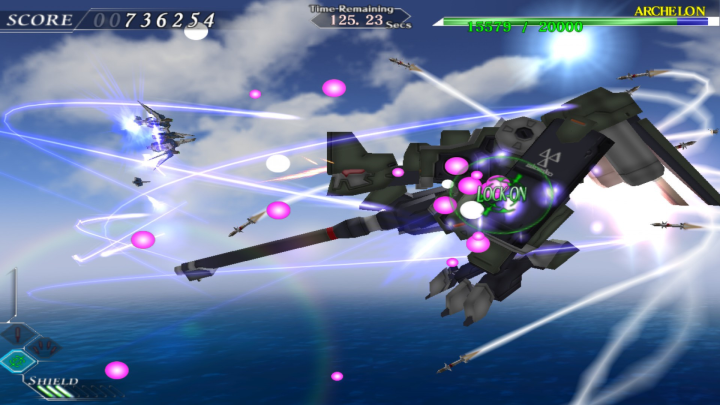 Then he drops into the background where he cant be directly targeted. Then, through a torrent of bullets and missiles flung in your direction, the cannon emits a solid beam of laser, which chases you around the screen.

Its a neat perception trick, but the laser is cumbersome and you should avoid it pretty easily. You abuse your homing shots to pelt him from afar, and use the limited screen space you have left to slip past missiles and plasma alike. This attack wont last long, though; soon, youll inflict enough damage to explode the giant cannon. ARCHELON responds to this by aiming a huge kung-fu kick at you face, zooming towards the screen at unexpected speeds.

You probably hadnt seen that coming. Missing its biggest gun and with a lot of its chunky armour worn away, ARCHELON swaps out its tactics, grows a drill from the top of his head, and charges around the screen trying to pierce you, all the while launching endless waves of serpentine lasers that zoom in on you from the back of the screen, forcing you to never stop moving. Which isnt made overly easy by the insane mech, spinning and swooping about, trying to headbutt you to death. At least at this point, you know the fight is nearly at an end. Survive this final gambit, and ARCHELON soon falls. He belongs to the ocean now.

Scene Three sees you fly into a city, soaring above intertwining highways and uniform grey buildings. But its fooled you; youve not really entered a city; youve wandered directly into Hell. 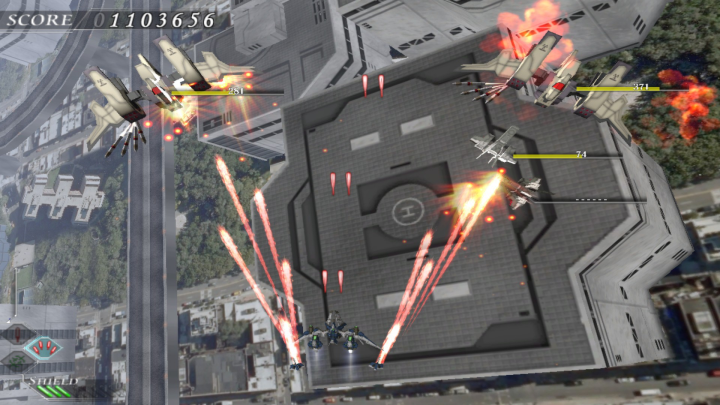 It soon becomes obvious that Ether Vapor isnt an overly easy game; its just fair. It wanted to give you a change to get used to the different bullet patterns; it wanted to advertise its myriad perspective shifts ahead of time. But thats all gone now. You wont know at first, because the same easily destroyed enemy fighters drizzle on screen as the view resets to vertical once more. They never go away, and their threat is magnified once new ships arrive, cutting up large sections of the screen in fiery red laser, giving you little room to dodge incoming fire or kamikaze pilots. They build impromptu obstacle courses, forcing you bank hard around them with scant room to spare. Smaller fighters are replaced by hulking warcrafts, belching out fans of rockets or streams of bullets. The arrival of the boss is almost a relief; then he slips behind you, engages the same laser beam youve been dodging all level and slides around the screen. Theres nowhere to hide, and the only way to stay alive is timing your path through the laser blockade with the enemy crafts barrel rolls, which place the lasers in the background for a scant half second. Win that fight and, turns out, thats just a warm up. Another massive craft using similar tactics shows up directly afterwards, only this one has helper satellites that cut off EVEN MORE of the screen in unforgiving lasers which then explode in an orgy of bullets, like soulless bastards.

Scene Four has you darting through a cavern scored through the middle of a series of cliffs. Youre not that far in before LIBELLULIUM makes his unwelcome return, but at least you know how to take him down. Except he knows you know all the safe places to hide, so summons legions of new craft to rise from the valleys floor to chase you out of them. Youre then flanked by a massive carrier you need to make numerous sweeps across, destroying its armaments one by one before forcing it into the ground. Think thats the end? You poor naive fool. You then dive into a network of caves where you fight a warehouse-sized spider bot. MEGARACHNE has limitless ways to crush you into paste across four different forms. One of which places the camera directly behind you and asks you to navigate through a series of laser webs. 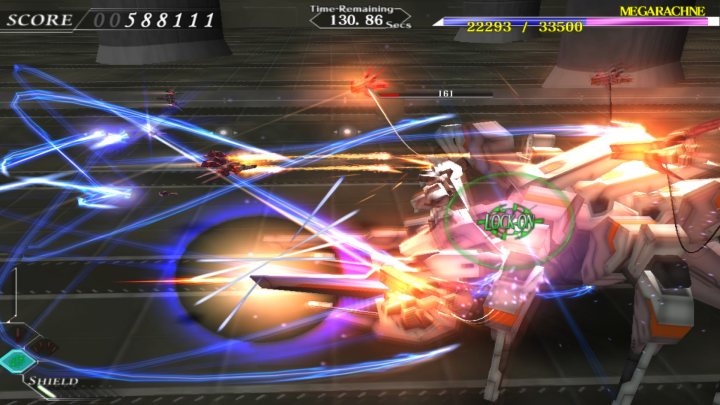 Ether Vapor lets you get your bearings and then gets right to work in kicking your arse. Theres another three stages left after you see MEGARACHNE off, but, odds you, you wont see them for a while. You start the game with a modest shield allowance and limited credits, but the game will reward you for getting a little bit further each session by slowly dialing these up. That means, play enough, and, eventually, youll have a mountain of continues to fall back on so you can effectively grind your way to completion. But you have to put the time in to get there; you have to work at getting better. Eventually, youll figure out which weapon set ups work best with which waves, youll figure out the safest paths through plots of bullets and missiles. Your ship will get hardier, your fallback options more expansive and you will be a better pilot. Youll still get your arse kicked by Scene Three though. Those bloody laser walls will be the death of you.
4/5

If you enjoyed this Ether Vapor Remaster review, you're encouraged to discuss it with the author and with other members of the site's community. If you don't already have an HonestGamers account, you can sign up for one in a snap. Thank you for reading!

© 1998-2020 HonestGamers
None of the material contained within this site may be reproduced in any conceivable fashion without permission from the author(s) of said material. This site is not sponsored or endorsed by Nintendo, Sega, Sony, Microsoft, or any other such party. Ether Vapor Remaster is a registered trademark of its copyright holder. This site makes no claim to Ether Vapor Remaster, its characters, screenshots, artwork, music, or any intellectual property contained within. Opinions expressed on this site do not necessarily represent the opinion of site staff or sponsors. Staff and freelance reviews are typically written based on time spent with a retail review copy or review key for the game that is provided by its publisher.