Welcome to A Remedy For What Ails You, a five-part retrospective on one of my favourite developers. If you havent worked it out yet, Im talking about Remedy: you know, that one bizarrely consistent studio that keeps making those kooky third person shooters? In this case, though, Im on about the game that started it all, and - naturally - the one I played third. Thats right, its time to talk about Max Payne. 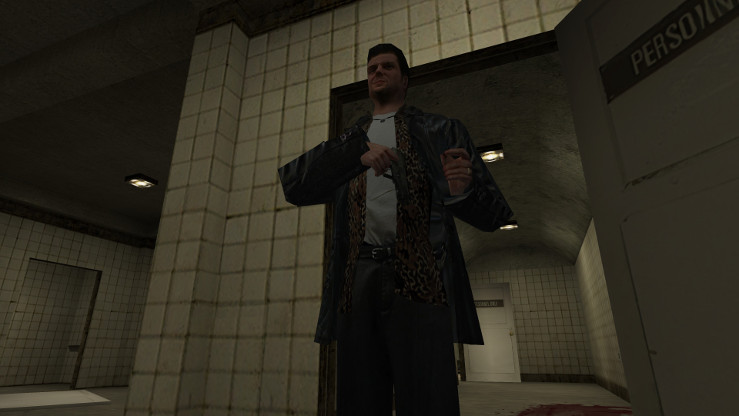 The first time I played Max Payne was round a friends house, where I played a level towards the middle of the game and immediately got intimate with the games core mechanics. The second time was at another friends house on an OG xbox. Then I bit the bullet and got it on Steam. I say that to illustrate just how quickly Max Payne gets under your skin: after just five minutes of playtime, you can confidently say that youre familiar with the controls and how best to use them, and know how to play the game. Its not that difficult, in earnest - you go around from place A to place B, and you shoot that which stands in your way until you reach the end of the level. So far so early 2000s. In fact, if I had to distil the game down to that basic level and ignore all the idiosyncrasies of the game, Id end up with a boilerplate statement that describes not just Max Payne, but every game in this series: its a very well implemented set of fairly standard mechanics. So what elevates it, then, is everything hanging off that very simple framework. So lets start with the bullet time, because did I ever mention I love bullet time?

My disappointingly shallow love of hollywood flashiness aside, Max Payne sets itself apart from the pack by implementing a bullet time mechanic that allows you to sail through the air and rid New York of scum, nine millimetres at a time. At any given time, you are only ever a button press away from The Matrix, and youll be relying on that to keep you alive throughout your playtime, because Max has a very limited pool of health. Its a strange restriction to place on the player, and certainly not one without frustrations, but the fact that Max cant soak up damage adds to the overall style of the game, and also makes gunfights that bit more tense. Its the difference between tearing mooks apart in a single player campaign and getting a three-kill streak on a multiplayer game - the vulnerability makes the relatively small scale seem all that much more invigorating. Thankfully, youre only ever a single button press away from loading your last quicksave, too, which means that when you do die, you can get back in the action nearly instantly. Of course, reloading from a quicksave or checkpoint every time you die isnt the only way to keep going, and in typical pre-COD style, its a sort of health-pack system. The twist here is that its painkillers you use to keep yourself going, rather than a medical pack, and in another nod to realism, theres a delay before the painkillers fully work. Each painkiller gives you about twenty percent health back, and using them is a delicate balancing act to strike: using a bunch of them at once gives you more health, with the risk that you could just completely wipe out on the next encounter and then not have any to hand. Contrariwise, being stingy with the painkillers could lead to a maddening state of constant damage. Its a funky way of doing health, but it really does serve to keep the game tense.

Of course, when discussing Max Payne, the gameplay alone is only ever half the story. While the wizards at Remedy did a fine job working out the gameplay, the artistic elements surrounding the game are anything from impressive-in-hindsight to adorably amateur. Whats definitely not amateur is the environments, which really drive the dingy New York night motif home. Cheap restaurants, alleys, grotty apartments, subway stations, industrial estates, the occasional underground base; all the environments are detailed and suitably moody, tying in with the story very nicely, and totally selling you on the descent into the criminal underbelly Max goes through. Truthfully, given the level design, the game could have got away with just using text boxes before the levels to convey the story, but instead, the game opts for fully voice-acted comic panels. Thus we arrive at the weird sinew that holds Max Payne together. When playing through the game, its almost impossible to tell what amount of the goofy dialogue and faces are supposed to be a sly swipe at film noir cop movies and pulpy comics, and how much of it came from inexperience. Throughout the whole game, Max spouts truly bizarre, super-cheesy dialogue, voiced with total seriousness, and the juxtaposition is perplexing. To some extent, it HAS to be satirical, but where exactly that cut-off lies is impossible to discern. Its a strange sort of meta charm that carries through the whole game. Oh, and one last thing. The Jackhammer shotgun in this game is just the greatest thing, and I love it. 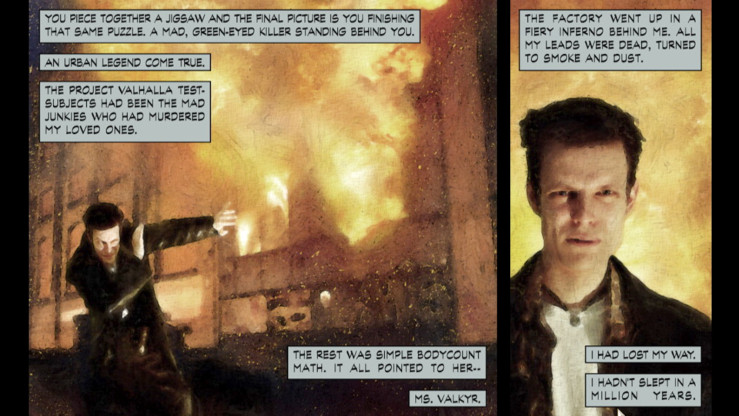 Of course, no rose is without thorns, and Max Payne is certainly not without its own set of eccentric flaws, chief among which is that the game by default is completely broken. For context, I dont just mean that the frame rate is janky, or theres a control bug, I mean that all the audio is either completely missing or sounds like the THX noise. If you can even boot the game at all. Thankfully, theres a community-made megapatch that fixes all the issues and adds in a truly impressive HD texture pack to boot, but thats not the point: in the nearly twenty years since its release, Max Payne hasnt received any updates whatsoever. Assuming you dont refund the game immediately, youll also have to deal with two of Max Paynes biggest annoyances - the enemies, and the inconsistent damage model.

At some point, a bunch of designers at Remedy must have been having an absolutely awful day when they were figuring out enemy placement for the game. No other explanation I can give explains why the enemies in the game are so routinely placed around corners or in awkward places. It gets more manageable once you work out that the game likes putting enemies in obnoxious places and thus learn to treat any door as a combat encounter, but nonetheless, it leads to a particularly steep learning curve. That learning curve isnt helped by the fact that weapon accuracy in Max Payne is reserved for the sniper rifle only, and that every other weapon in the game does mystery damage. There were times when I shot folks in the chest with a pump-action shotgun, only for them to continue shooting me as if nothing had happened. Of course, its not exclusive to the shotgun, but the effect is most pronounced when you use one of the most powerful weapons in the game and the enemies shrug it off. 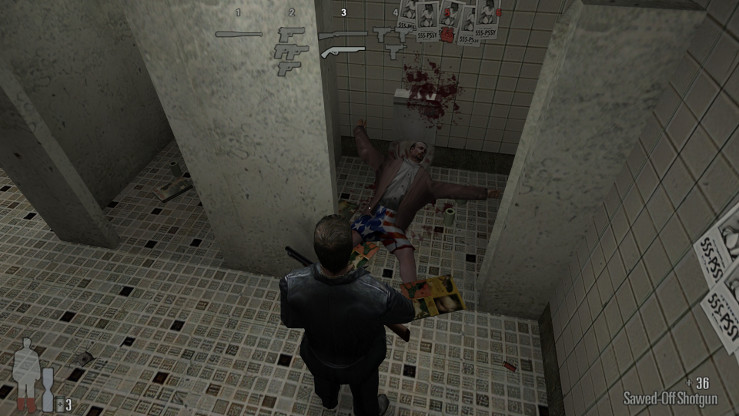 Finally, while almost all of the levels in Max Payne are great, there are two levels in particular that stick out like a sore thumb. Levels that glare at me with disdain. The dream sequences. While conceptually interesting (and in one case, a strange foreshadowing of a game made some seventeen years later,) the dream sequences both make the inexplicable decision to force the player into long platforming sections. These platforming sections take place in an inky black abyss, with only a thin red line of blood to walk on, multiple dead ends, and a baby crying constantly. If theres a cheatcode to skip those bits, Id really like to know, because theyre just the worst.

So with the book closed on this funky old title, I find myself faced with a quandry. On one hand, Max Payne is a veritable classic, and one with a cult-like following today, but on the other hand, Ive never reviewed a game I had to manually fix before playing. Sure, there are other older titles that dont play nicely with modern hardware, but Max Payne is an especially galling example, given that the studio and the publisher are both still around. If the community can strap together a fix that not only gets the game to run, but essentially HD remasters it, then it seems downright lazy that Max Payne hasnt been given the love it deserves, particularly when the playstation store has a version for the PS4. However, once I got my hands dirty, the game was a blast, and after a short acclimatisation period, I quickly fell in love with the game, weird face and all. There are some rough edges throughout that no amount of HD texture packs will fix, but for all its faults, the original Max Payne still stands up as well as it ever did. Im still not letting it off lightly though.

Now if youll excuse me, Ive got to jump around in slow motion.

If you enjoyed this Max Payne review, you're encouraged to discuss it with the author and with other members of the site's community. If you don't already have an HonestGamers account, you can sign up for one in a snap. Thank you for reading!

© 1998-2021 HonestGamers
None of the material contained within this site may be reproduced in any conceivable fashion without permission from the author(s) of said material. This site is not sponsored or endorsed by Nintendo, Sega, Sony, Microsoft, or any other such party. Max Payne is a registered trademark of its copyright holder. This site makes no claim to Max Payne, its characters, screenshots, artwork, music, or any intellectual property contained within. Opinions expressed on this site do not necessarily represent the opinion of site staff or sponsors. Staff and freelance reviews are typically written based on time spent with a retail review copy or review key for the game that is provided by its publisher.