Yi and the Thousand Moons lists itself as an Adventure game, which is a lie of sorts. And its certainly not the first Yi will try to sell you on. For example, the titular thousand moons are a little bit of an exaggeration  theres actually six. But not for long! The gods have commanded Yi to shoot them down in an attempt to harvest their moonlight and save their dying world. The sparse occupants of her village have exclusively labelled this a Very Bad Idea, crediting the halo of moons as protection against suffocating starlight. Maybe she has more faith in the words of omnipotent sky wizards, because she shoots them down regardless. Thus dooming everyone.

While that does indeed sound like a ripping introduction for a spot of adventuring, the most action youll see is awkwardly lining Yi up with something now and then, and jabbing a mouse key to sometimes fire an arrow. I guess the most questionable aspect of the adventure game tag in this instance is the game bit, with Yis brush with doomsday lasting around half an hour, featuring very little in the way of interactivity. You could label it a low spec walking simulator of sorts, as you traverse your limited world in order to move from one plot point to the next. You climb the mountain to shoot down the moons. You return to the village so all three occupants can thank you for dooming them, and then you head off to see the gods to beg their help in fixing things. This entire trip consists of walking in one straight line from start to finish. Just to make sure youre not tempted by a spot of wanderlust, your entire journey is buffered by ever-present invisible walls. 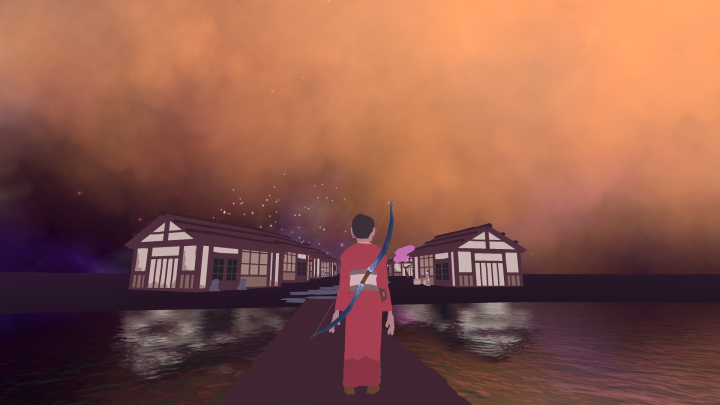 As a tale, its purposefully condensed, never really dwelling on new revelations because its enforced brevity means its already moving on to the next one. As a game, it actively struggles to be interactive enough to broadly qualify. So it settles of being kind of neither and finds a whole new hook; its a musical. Instead of passé conversations, Yis exclusive form of communication is through song. Which manages to work surprisingly well; the singing drops naturally into the background track, making everything feel more organic than it probably has a lot of right to. She sings about how shes been ordered to shoot down the moons; the villagers sing back that theyd have really preferred if she didnt. The gods sing over her requests, as their station probably befits. Bloody mortals turning up on their doorstep reminding them that their advice has brought about the end of the world. Who needs that?

The audience with the gods is the third act of seven, and easily ranks as Yis strongest moment, with verses being exchanged or even cut off completely by competing singers. Which isnt to say the musical aspects disappoint elsewhere; there are noticeable moments of jarring phrases that shouldnt belong around the games chosen Shogunate period, but theres laudable quality in both the recording and singing itself. And then, in less than half an hour, its all done.

Thats a very short run time however you want to look at it. On one hand, it means that everything is tied up and finished before the musical aspect perhaps starts to overstay its welcome but, on the other, it means Ive spent more time typing up my thoughts than I have playing. Its hard to consider it a fully-fledged game; its hard to consider it a game at all. Yis biggest selling point is its uniqueness, that its a digital oddity or curiosity of sorts. Its an interactive(ish) operatic fable that will hold your interest for its limited runtime, but offers little reason for a revisit. Give it a go if youre inquisitive or tragically artistic; give it a miss if youre expecting gameplay in your videogames.
2.5/5

If you enjoyed this Yi and the Thousand Moons review, you're encouraged to discuss it with the author and with other members of the site's community. If you don't already have an HonestGamers account, you can sign up for one in a snap. Thank you for reading!

© 1998-2020 HonestGamers
None of the material contained within this site may be reproduced in any conceivable fashion without permission from the author(s) of said material. This site is not sponsored or endorsed by Nintendo, Sega, Sony, Microsoft, or any other such party. Yi and the Thousand Moons is a registered trademark of its copyright holder. This site makes no claim to Yi and the Thousand Moons, its characters, screenshots, artwork, music, or any intellectual property contained within. Opinions expressed on this site do not necessarily represent the opinion of site staff or sponsors. Staff and freelance reviews are typically written based on time spent with a retail review copy or review key for the game that is provided by its publisher.