The Streets of Rage IP hasn't seen a new entry since 1994, so being somewhat reserved in your feelings is a fair reaction to have when a new game arrives after decades of nothing. However, with two notable dev studios at the helm, Lizardcube of Dragon's Trap remake fame and Guard Crush Games who worked on Streets of Fury, reservations turn cautiously-optimistic for 2020's Streets of Rage 4. Then, when you're in the middle of combat for the first time, pummeling punks and thugs with returning vets Axel and Blaze, along with two newcomers, there's no doubt: this feels like a proper Streets of Rage title.

Whether it's grabbing a familiar mohawk-donning, jacket-wearing goon for a combo attack, beating someone with a metal pipe, or eating turkey dinners from rusty barrels, this latest iteration certainly doesn't forsake its heritage. But instead of battling it out with 16-bit sprites, you're treated to Lizardcube's instantly-recognizable artwork with fluid animations. You're practically playing a comic book come to life as vibrantly-drawn characters with attitude clash in front of gritty streets filled with neon signs and erotic stores, nasty sewers, and even an art exhibit. And also staying true to the series roots is an electronic dance soundtrack that follows the mayhem. 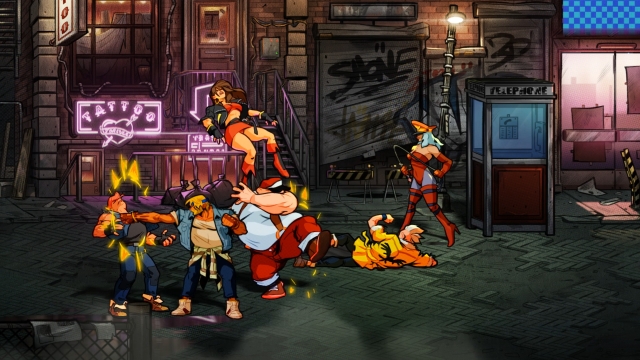 In terms of fighting style, Streets of Rage 4's influence is essentially a refined version of the third game. In that regard, the combat is straightforward but fast when it comes to performing combos and throws, weapons break after a few swings, and successful special attacks consume your health. The rogues gallery itself is comprised mostly of returning foes from the previous three titles, so the game is like a genuine reunion. Though, new enemy additions bring something unique to these confrontations, such as having to carefully read parry animations from karate masters, as a simple mistake can literally knock you across the screen. As is expected from the beat 'em up genre, you'll repeatedly encounter same enemy types in varying color swaps throughout, but here it does a decent job mixing and spacing out appearances with its sizable cast.

If there's one distinct aspect that separates this sequel's combat from its predecessors, it's that the game likes to pile on enemies. This definitely creates a frenzied environment considering the AI likes getting in your face a lot, and this is where the smooth subtle flow at which your characters perform combos and other attacks shine through. There will be situations where you're surrounded by three goons and you're basically freestyling punches between the group, all while eyeballing a taser-wielding cop and two riot gear cops closing in. In most cases, while challenging, crowd management is still doable through a combination of skill and knowledge of patterns. However, as you climb through the stages, you start realizing something when you're occasionally beat down, and unfortunately, frustrations rise as you begin seeing cracks in the way combat "punishes" players.

Basically: you have no invincibility frames as you're recovering from a knockdown. It's true the previous three games didn't have this either, but they also didn't have aggressive enemy AI eager to pounce on your character the moment you regain control. Streets of Rage 4 does. During moments with a ton of enemies on screen, as you're getting back up, there's a chance that one is going to knock you back down with a strong attack, whether from a weapon, a throw, or they were already charging from across the screen with a knife. Worse, it could happen multiple times in a row. The game also has air juggles, which is fun to do... until the enemy also does it in these circumstances. So you can imagine how irritating this is when you're up against strong opponents later on, and even more when playing on higher difficulty settings with ruthless AI and a larger crowd presence.

Thankfully, it doesn't happen all the time; it's just really disgusting when it coincides with the timing of enemy attacks. It's an unfortunate flaw, because everything else about the fighting mechanics is entertaining, in spite of the fact that its template is very rudimentary for a beat 'em up. The thing that really sells it, though, is the energetic vibe of combat and its flexibility, rarely giving you breathing room during brawls. You're constantly engaged, which is extremely helpful during stages that feel like they exist as filler. Streets of Rage 4 may not revolutionize the beat 'em up genre, but it's definitely fun to play despite being a little rough around the edges, looks and sounds great, and you'll have a good time, especially if you can arrange a local four-player co-op session.
4/5

© 1998-2020 HonestGamers
None of the material contained within this site may be reproduced in any conceivable fashion without permission from the author(s) of said material. This site is not sponsored or endorsed by Nintendo, Sega, Sony, Microsoft, or any other such party. Streets of Rage 4 is a registered trademark of its copyright holder. This site makes no claim to Streets of Rage 4, its characters, screenshots, artwork, music, or any intellectual property contained within. Opinions expressed on this site do not necessarily represent the opinion of site staff or sponsors. Staff and freelance reviews are typically written based on time spent with a retail review copy or review key for the game that is provided by its publisher.