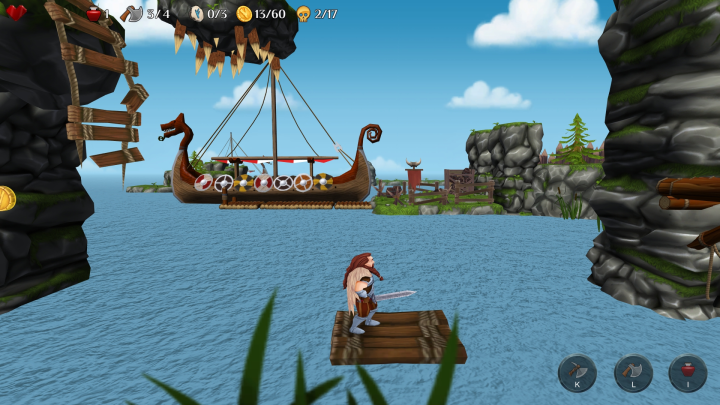 It would be unfair to suggest that Viking: Sigurds Adventure is a bad game, and I am famous for my sense of fairness, so I wont call it that. Ill just have to find some other way to describe it. Its a platformer with slightly inaccurate and floaty controls featuring a large number of bite-sized levels that will probably take a couple of minutes each to finish. Its not built for furious, elongated sessions; it doesnt feature a strong narrative to drive you on with, and seems pretty content with being picked up and put down in small bursts. The levels are competent, but not particularly exciting so the game tries something else to keep bringing you back  daily log on awards, offering loot so you can slowly upgrade your equipment. This is a mobile game port isnt it? Ive been tricked into talking about a mobile game port again, havent I? This is among my least favourite things to do.

But I guess prejudging Sigurds Adventure wouldnt be fair and, as mentioned, I am ridiculously fair. So Ill loquaciously label it thus: its alright. Thats going to be the driving force behind anything Ill have to say about this Nordic-themed platformer; nothing about it is stand-out awful, but theres nothing about it which could catapult it near the top of your playlist. Its cheap, inoffensive and you could probably play through almost an entire level before the slightly inaccurate jumping made you miss the same rotating platform seven consecutive times as you struggle to swallow down some rage.

Its not helped by a small handful of things. Theres no controller support, which is a pain; you can get by with just the keyboard for navigation and the mouse for attacking, but its smothered in a feeling of inaccuracy a gamepad might help mitigate. Or maybe it wouldnt  Ill never know! Your spotty jumping (that, frequently, isnt your fault) is often punished by angry wildlife or spike pits, giving the game a chance to show how its invincibility frames youre traditionally provided to recover with have a sadistic sense of brevity attached. Odin help you if you fall in any water; better hope youve recently hit a checkpoint. 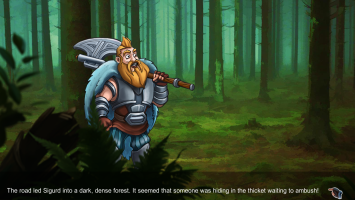 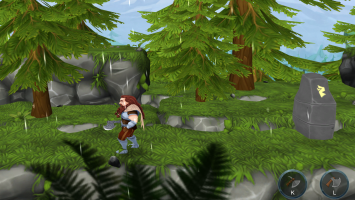 This is the same character, looking completely different when featured in a cut scene than his in game model. Perhaps it was programmed in Norse code?

Checkpoints are a saving grace of sorts. Hit one of these and your progress is hardsaved, meaning any deaths you may swallow dont gobble up all the gold and/or runes you may have collected. Youll need both forms of currency in the main menu where you can buy perks in a way that is absolutely not trying to paper over what used to be a microtransaction system during its mobile platform days. Aside from the fact it unequivocally is. While Im giving Viking light props, good on it for doing away with that after charging PC players a flat entry base. It might be a middle-of-the-road platformer, but at least its not a predatory middle-of-the-road platformer.

I suppose what Im saying is that theres worse games than Viking: Sigurds Adventure and it does enough to make it a better direct-from-mobile port than perhaps the majority. Its inexpensive, serviceable and basically competent. These are the most positive adjectives available to me. You probably have countless better titles left rotting in your Steam library. Just, in this case, you undoubtedly have worse ones, too
2/5

If you enjoyed this Viking: Sigurd's Adventure review, you're encouraged to discuss it with the author and with other members of the site's community. If you don't already have an HonestGamers account, you can sign up for one in a snap. Thank you for reading!

© 1998-2020 HonestGamers
None of the material contained within this site may be reproduced in any conceivable fashion without permission from the author(s) of said material. This site is not sponsored or endorsed by Nintendo, Sega, Sony, Microsoft, or any other such party. Viking: Sigurd's Adventure is a registered trademark of its copyright holder. This site makes no claim to Viking: Sigurd's Adventure, its characters, screenshots, artwork, music, or any intellectual property contained within. Opinions expressed on this site do not necessarily represent the opinion of site staff or sponsors. Staff and freelance reviews are typically written based on time spent with a retail review copy or review key for the game that is provided by its publisher.